Fetzer made the request in an early afternoon letter sent to Steele.

Fetzer told CNN in a telephone interview that he felt that “the party needed new leadership to move forward.”

“This is a conclusion that I reached only recently and somewhat reluctantly,” Fetzer said. “I have been supportive of him during my entire tenure as chairman of the North Carolina Republican Party. In the last few days, I have reached the conclusion that if we are going to be the party of reform we have to start with our own party.”

END_OF_DOCUMENT_TOKEN_TO_BE_REPLACED

The former House speaker - who has had a friendly relationship with Steele for years and even penned the introduction to Steele's book - told Republicans to lay off the chairman earlier this week, urging them to focus instead on defeating Democrats in November.

Gingrich continued to stand up for the embattled party chairman on Thursday in New Orleans, where he was set to speak to the opening session of the Southern Republican Leadership Conference.

In an interview with CNN, Gingrich was asked if Republican donors were right to have questioned Steele's financial stewardship.

END_OF_DOCUMENT_TOKEN_TO_BE_REPLACED

"It has been a tremendous honor to serve the President, and leaving this great team is bittersweet," she said in a statement. "After nearly 2 years of work that has been exhilarating and grueling in equal measure, I am going to step off the treadmill for awhile and rediscover the experience of dining with my husband on a regular basis. It has been a privilege to be part of the health care team, and I will be cheering with pride from the sidelines as this historic law takes effect."

Douglass, a former ABC News correspondent, joined then-Sen. Barack Obama's presidential campaign in 2008 and went to work for the administration after Obama was elected.

White House Communications Director Dan Pfeiffer said Douglass "will continue to be a valued advisor to this President and this White House."

Crist vows to run as a Republican

[cnn-photo-caption image= http://i2.cdn.turner.com/cnn/2010/images/04/08/art.crist0408.gi.jpg caption=" A spokesman for Gov. Crist said Thursday that Crist is 'proud to be a member of the Party of Abraham Lincoln, Teddy Roosevelt, and Ronald Reagan.'"]
Washington (CNN) – Charlie Crist's Senate campaign sought to squash rumors Thursday that he is considering running as an independent and accused GOP opponent Marco Rubio of promoting the idea.

"The Governor is proud of his conservative credentials and stands firmly behind the principles of limited government and more personal freedom, the bedrock values of the Republican Party," Crist campaign manager Eric Eikenberg said in a statement. "He is proud to be a member of the Party of Abraham Lincoln, Teddy Roosevelt, and Ronald Reagan.

"This should completely and utterly put to rest any of the unfounded rumors coming from the Rubio campaign that Governor Crist would run as anything other than the Republican that he is," Eikenberg added.

Crist, the current Florida governor and one-time frontrunner, is now in a battle for the Republican Senate nomination with Rubio, a former Florida House speaker. A Mason-Dixon poll conducted in March showed that Rubio had an 11-point lead over Crist.

END_OF_DOCUMENT_TOKEN_TO_BE_REPLACED

The ads, paid for by FRC Action PAC, contend that the legislation does not maintain a longstanding federal policy against funding abortion.

Stupak led a coalition of anti-abortion rights Democrats, who initially withheld support for the legislation over the abortion issue.

As the bill approached a final vote in the House, Stupak announced that he had reached an agreement with the White House. In exchange for the Stupak coalition's support, President Obama issued an executive order stating that passage of the health care bill did not change the federal prohibition on funding of abortions. Many Republicans and social conservatives argue, however, that Obama's order does not do enough and that the Democratic health care bill contains avenues for abortion funding.

The radio ad begins with the sound of a creaky door opening. "What's that noise?" one woman asks in the ad.
END_OF_DOCUMENT_TOKEN_TO_BE_REPLACED

33 states out of money to fund jobless benefits

New York (CNNMoney.com) - With unemployment still at a severe high, a majority of states have drained their jobless benefit funds, forcing them to borrow billions from the federal government to help out-of-work Americans.

A total of 33 states and the Virgin Islands have depleted their funds and borrowed more than $38.7 billion to provide a safety net, according to a report released Thursday by the National Employment Law Project. Four others are at the brink of insolvency.

Debt-challenged California has borrowed the most, totaling more than $8.4 billion, followed by Michigan and New York, which have loans worth more than $3 billion. Nine other states have borrowed at least $1 billion from the federal government.

Gingrich to call on Republicans to offer new vision

"It's not enough to say no to the radical agenda of Obama, Pelosi, and Reid," Gingrich said in a statement ahead of his speech at the Southern Republican Leadership Conference. "Tonight's speech will explain why real leadership requires Republicans to offer a compelling vision of safety, prosperity, and freedom that stands in vivid contrast to Obama's secular, socialist, machine now running Washington."

END_OF_DOCUMENT_TOKEN_TO_BE_REPLACED 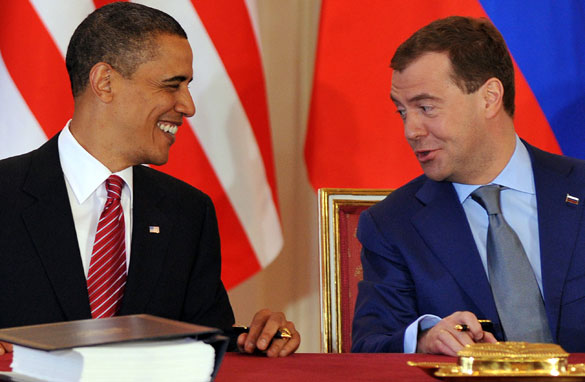 President Obama and Russian President Dmitry Medvedev signed a major nuclear arms treaty Thursday, but critics in the Senate will have their say before anything is put in place. (PHOTO CREDIT: Getty Images)

Washington (CNN) - President Obama and Russian President Dmitry Medvedev signed a major nuclear arms treaty Thursday, but critics in the Senate will have their say before anything is put in place.

Among them is Senate Minority Leader Mitch McConnell, R-Kentucky, who said in a statement Thursday that the Obama administration "will need to meet three requirements if it expects favorable consideration of the START follow-on treaty."

"The Senate will assess whether or not the agreement is verifiable, whether it reduces our Nation's ability to defend itself and our allies from the threat of nuclear armed missiles, and whether or not this administration is committed to preserving our own nuclear triad," McConnell said in a statement.

The new Strategic Arms Reduction Treaty - known as START– builds on a previous agreement that expired in December. The agreement reduces the number of nuclear weapons held by the United States and Russia by about one-third, among other provisions.

Posted by
CNN Associate Producer Martina Stewart
Click to watch video
(CNN) – A prominent conservative lawmaker said Thursday that the Republican Party and the Tea Party movement are in the process of merging.

Appearing on CNN's "Newsroom," Rep. Michele Bachmann, R-Minnesota, rejected any suggestion that the GOP and Tea Partiers are at odds during this midterm election year. Instead Bachmann said the established political party and the growing conservative grassroots movement are unifying under the principle of fiscal conservatism.

"It's really merging into one single, solitary unit," Bachmann said.

She added, "A number of Tea Party groups from around the country are coming together, unifying under the umbrella of economic, fiscal conservatism because Americans, quite simply, feel like they're taxed enough already."

The Republican lawmaker, who is herself a favorite of the Tea Party movement, pointed out that the phrase "taxed enough already" is the basis for the acronym "Tea" that has become the moniker for the grassroots movement that opposes the spending and deficits of the Obama administration.

Bachmann described concerns about the possibility of higher taxes as an "energy boost going forward."
END_OF_DOCUMENT_TOKEN_TO_BE_REPLACED

[cnn-photo-caption image= http://i2.cdn.turner.com/cnn/2010/images/04/08/art.palin0407.gi.jpg caption ="Sarah Palin told Sean Hannity Wednesday that she supports RNC Chairman Michael Steele."](CNN) - A week after Sarah Palin asked Republican National Committee officials to remove her name from an invitation that suggested she might attend a series of GOP fundraising events, the former Alaska governor made clear she is a strong supporter of the organization's embattled chairman, Michael Steele.

"I support Michael Steele. I am glad he is the leader of the party, administratively," Palin told Fox News' Sean Hannity Wednesday. "If those within the party are choosing to go a different direction, his term is up in a number of months and they can vote someone else in. But I think he is doing a great job."

The comments come amid speculation Palin is seeking to distance herself from Steele and the RNC after news surfaced the organization expensed a night out a risqué Los Angeles nightclub for donors earlier this year and ran up large bills for luxury hotel stays and private jet travel.