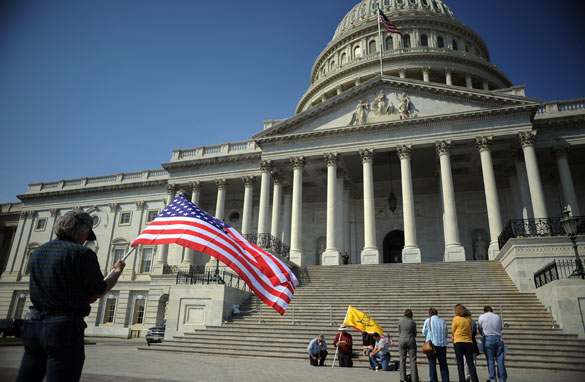 The law enforcement official stressed to CNN that it's not usual to see spikes from time to time and while the level is up this year there have been previous times when it's been high but followed by a very low year.

Two people were arrested this week with making threats against lawmakers. Charles Alan Wilson is charged with making death threats against Sen. Patty Murray, D-Washington. Wilson allegedly stated that Murray "had a target on her back," according to a Justice Department statement. A judge has ruled Wilson can be released with strict conditions if he posts a $20,000 bond.

Gregory Giusti is charged with making obscene, threatening or harassment phone calls to the office and home of House Speaker Nancy Pelosi, D-California. During a court hearing Thursday, he was not asked to submit a plea and remained in custody pending a further hearing.

One of the lawmakers targeted was Rep. Bart Stupak, D-Michigan, who announced Friday he was not running for re-election. His office received several angry voice mails and a fax saying "We'll get you."

At a news conference Friday, Stupak and his wife acknowledged the messages, but he said they were not a major reason behind his decision.

"Those threats," he said. "The three o'clock in the morning phone calls threatening things like that. It is people outside the district. That is not my district."

His wife, Laurie, said they were deluged with messages. "Some of those calls were vulgar, cruel, profane and threatening. We were saddened and disappointed by the cruelty and hypocrisy of some of the callers."