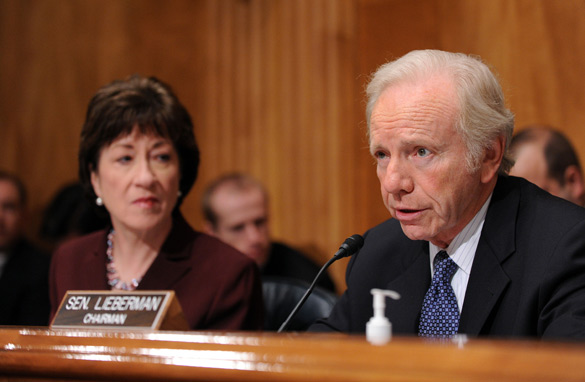 "The purpose of the Committee's investigation . . . is to answer questions that are critical to our government's ability to counter homegrown terrorism," Sens. Lieberman and Collins wrote in a letter accompanying the subpoenas. . (Photo Credit: Getty Images/File)

Committee chairman Sen. Joseph Lieberman, I-Connecticut, and ranking Republican Sen. Susan Collins of Maine said the Defense Department and Justice Department had so far failed to provide information about the shootings sought by the panel.

Maj. Nidal Hasan, an Army psychiatrist, has been charged with 13 counts of murder in the November shootings.

"Given the warning signs of Maj. Nidal Malik Hasan's extremist radicalization and growing hostility toward the U.S. military and the United States generally, why was he not stopped before he took 13 American lives, and how can we prevent such a tragedy from happening again?" the letter said.

"In order to answer those questions, we must assess the information that the U.S. government had prior to the attack and the actions it took in response to that information." The subpoenas give the two government departments until 10 a.m. on April 26 to provide the requested information.

Last week, when the senators warned they might file subpoenas, Defense Department spokesman Lt. Col. Les Melnyk told CNN that Defense and Justice departments had sent a letter to the committee explaining they had cooperated as much as they could. "Disclosure of some of the material you requested could compromise the pending prosecution," said the letter to the committee from Elizabeth King, assistant secretary of Defense for legislative affairs and Ronald Welch, her counterpart at the Justice Department.

The letter asked Lieberman and Collins to hold off issuing subpoenas in the case. In their statement Monday, Lieberman and Collins said they had no choice. "Our efforts have been met with delay, the production of little that was not already publicly available, and shifting reasons why the departments are withholding the documents and witnesses that we have requested," the senators said. "Unfortunately, it is impossible for us to avoid reaching the conclusion that the departments simply do not want to cooperate with our investigation."

Collins was upset that two former Defense Department officials who spearheaded an investigation of the Fort Hood shootings for Secretary Robert Gates were given access to materials that Congress has been denied.

Much of materials requested by the Senate committee are also sought by Hasan's lawyer, attorney John Galligan.

Galligan said last week he was "disconcerted" by Lieberman's statement at a Thursday news conference that effectively declared Hasan guilty of the shootings. Such a statement from a senator could prejudice Hasan's ability to get a fair trial, Galligan told CNN.