[cnn-photo-caption image= http://i2.cdn.turner.com/cnn/2010/images/04/29/art.dancoats4.facebook.jpg caption="Former Sen. Dan Coats is hoping to win back his old seat in Indiana."](CNN) - The battle for Congress picks up steam Tuesday as three states hold primaries.

Among the most interesting contests are a Republican Senate nomination fight in Indiana and Democratic Senate primary battles in Ohio and North Carolina.

In Indiana, former Sen. Dan Coats is hoping to win back his old seat. The former Republican lawmaker, who is the establishment candidate in the race, is facing off against a number of opponents in Tuesday's primary, including former Rep. John Hostettler and state Sen. Marlin Stutzman.

Conservative Sen. Jim DeMint of South Carolina has endorsed Stutzman, who is also the favorite of local Tea Party groups in Indiana.

END_OF_DOCUMENT_TOKEN_TO_BE_REPLACED

Since President Obama took office, the White House new media team has worked to ensure that he has a robust presence on social networking sites such as Twitter and Facebook. But video content has also been a strong tool in their portfolio to get the president's message out.

"Speeches, press releases, and the radio have been long-standing tools of communication available to a president," Jason Djang, the White House Deputy Director of New Media who is in charge of White House Video, told CNN in an e-mail. "Online video (as well as other online components) is just another tool at his disposal."

The majority of videos published by the White House are public events held by the President and other administration officials. Those are 'reference' or 'primary source' materials Djang produces to allow people to watch a speech, town hall or press briefing without edits or commentary.

There are short films about interesting events occurring at the White House, such as musical performances, and more light-hearted pieces that provide a behind-the-scenes glimpse of the life in the White House.

"It's safe to say that video is an increasingly popular form of online content, and having capacity to create video just adds to the degree of access the public can have to the President and his Administration," said Djang, a former documentary filmmaker who has been producing video for Obama since the 2008 campaign. "People can watch every one of his public events since taking office and make up their own minds about what he is saying."
END_OF_DOCUMENT_TOKEN_TO_BE_REPLACED

[cnn-photo-caption image= http://i2.cdn.turner.com/cnn/2010/images/05/03/art.bp.gi.jpg
caption="BP spent almost $16 million lobbying Congress in 2009 and over $3.5 million so far this year, according to the non-partisan Center for Responsive Politics (CRP)."]

Washington (CNN) - Congress is demanding answers in its investigation of the Gulf of Mexico oil spill - and the BP executives likely to be grilled in the weeks ahead are no strangers to the ways of Washington.

The company spent almost $16 million lobbying Congress in 2009 and over $3.5 million so far this year, according to the non-partisan Center for Responsive Politics (CRP).

BP employees also gave over $3 million in campaign contributions during the last decade, and almost $110,000 in 2010.

END_OF_DOCUMENT_TOKEN_TO_BE_REPLACED

U.S. reveals number of nuclear warheads it has

Washington (CNN) - The United States has 5,113 nuclear warheards in its current stockpile and many thousands more that have been retired and are awaiting dismantling, according to a senior defense official.

The release of the number of warheads marks only the second time in U.S. history the government has released the once top secret information.

[cnn-photo-caption image= http://i2.cdn.turner.com/cnn/2010/images/05/03/art.durbin1.gi.jpg
caption="'There's a lot to be learned by members and perhaps new standards when it comes to off-shore drilling,' Durbin said in a conference call with reporters."]

Washington (CNN) - Senate Democratic Whip Dick Durbin said Monday that because of the oil spill in the Gulf of Mexico, he is "sure that this administration will come out with new standards for safety when it comes to any offshore drilling in the future."

"We're going to hold ourselves to very high standards because of this tragedy in the Gulf of Mexico. It's a good indication of the price that you pay if you don't," Durbin said in a conference call with reporters.

Asked if he could support new offshore drilling in the leading energy proposals from the Obama administration and key senators, Durbin acknowledged, "It's a hard case to make until you can get down to the safety issues."

END_OF_DOCUMENT_TOKEN_TO_BE_REPLACED 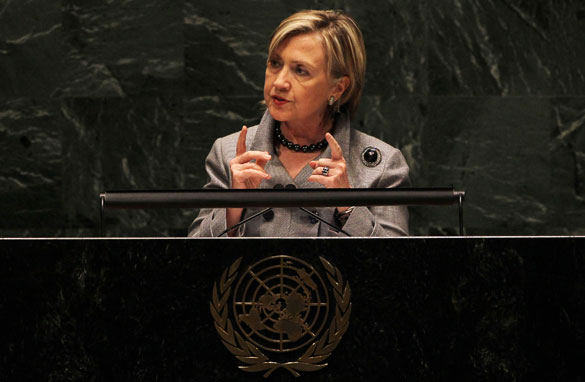 Clinton called Iranian President Mahmoud Ahmadinejad's comments at the conference earlier in the day "the same tired faults and sometimes wild accusations" against the United States and other countries. (PHOTO CREDIT: Getty Images)

United Nations (CNN) - Iran "will do whatever it can to divert attention from its own record and to attempt to evade accountability," U.S. Secretary of State Hillary Clinton said Monday at the opening of a conference on nuclear non-proliferation.

Clinton called Iranian President Mahmoud Ahmadinejad's comments at the conference earlier in the day "the same tired faults and sometimes wild accusations" against the United States and other countries.

The Islamic republic has continuously defied the U.N.'s International Atomic Energy Agency and its Security Council, Clinton said, adding that Iran was the "only country in this hall that has been found by the IAEA board of governors to be currently in noncompliance with its nuclear safeguards obligations."

She called on Ahmadinejad and his regime "to join with all the other delegations represented at this meeting to go ahead and fulfill our international obligations and work toward the goal of a safer world."

(CNN) – Maricopa County Sheriff Joe Arpaio, a fixture in Arizona politics, announced Monday that he will not seek the Republican nomination for governor in his home state.

"I just don't want to leave my 4,000 dedicated employees," Arpaio said. "I am going to contribute my service and fight as the Sheriff of Maricopa County."

"I don't want to be egotistical, but I could be the governor if I ran," he boasted. "My polls are very high. I got the money. I got the polls. I got the support."

Arpaio made the announcement in an interview set to air on CNN’s "John King USA" on Monday night.

Arpaio’s tough approach to law enforcement has earned him a following among anti-illegal immigration activists both in Arizona and around the country. He welcomed the recently-passed Arizona law that grants state police officers greater power in questioning suspected illegal immigrants.

[cnn-photo-caption image= http://i2.cdn.turner.com/cnn/2010/images/05/03/art.moveonban0503.yt.jpg caption="MoveOn is out with a new TV ad asking President Obama to reconsider a new policy."]
Washington (CNN) – An outspoken liberal advocacy group is using a new television advertisement to take on President Obama over his recent decision to expand the areas available for offshore oil drilling.

Last month, the president announced a new policy that opens up large swaths of U.S. coastal waters in the Atlantic Ocean and the Gulf of Mexico to oil and natural gas drilling. Three weeks later, an offshore oil rig exploded and collapsed, creating a massive oil slick that threatens the Gulf Coast region.

Friday Obama maintained his commitment to the new policy.

"So, let me be clear," the president said, "I continue to believe that domestic oil production is an important part of our overall strategy for energy security, but I've always said it must be done responsibly, for the safety of our workers and our environment."

"Sometimes great leaders are tested," the narrator says in MoveOn's new 30-second television ad as images of President Obama in the Gulf Coast region appear on the screen. "For decades, oil companies have dictated our energy policy," the commercial claims. "President Obama, will you lead our country into the clean energy future?," the ad queries.
END_OF_DOCUMENT_TOKEN_TO_BE_REPLACED

[cnn-photo-caption image= http://i2.cdn.turner.com/cnn/2010/images/05/03/art.crist.ebay.jpg
caption="The state party took to eBay Monday afternoon to sell off the framed portrait under the banner 'Help the Republican Party of FL Get Our Money Back!'"]

Washington (CNN) - The Republican Party of Florida has followed through on its promise to auction off an oil painting of Gov. Charlie Crist, who bolted from the party last week to run for Senate as an independent.

The state party took to eBay Monday afternoon to sell off the framed portrait under the banner "Help the Republican Party of FL Get Our Money Back!"

The eBay product listing, which describes the subject as "Untrustworthy, Self-Serving Politician," drips heavily with sarcasm and outright disdain for the first-term governor.

"Canvas is naturally sensitive to changes of temperature and humidity, just as the Charlie Crist's political convictions are subject to fluctuations in poll numbers," reads one mock disclaimer on the auction page.

END_OF_DOCUMENT_TOKEN_TO_BE_REPLACED

[cnn-photo-caption image= http://i2.cdn.turner.com/cnn/2010/images/05/03/art.bobbennett.gi.jpg
caption="Bennett has been reaching out directly to delegates who will attend the upcoming Utah GOP convention."]

And according to a Salt Lake Tribune survey, nearly four in ten likely Republican primary voters say they back Bennnet, putting the three-term senator nearly 20 points ahead of his closer competitor.

Not bad numbers for a politician running for re-election – unless, of course, you face Bennett's predicament. His problem: because the Utah GOP uses a convention to help determine it's nominee, Bennett might not even make it to the June primary.