[cnn-photo-caption image= http://i2.cdn.turner.com/cnn/2010/images/05/06/art.cameron0506.sun.jpg caption="The Sun, a Fleet Street newspaper, has borrowed the iconic Barack Obama 'Hope' campaign poster to endorse Conservative David Cameron."]
London, England (CNN) – As Britons head to the polls Thursday in what is clearly a historic election, comparisons to the 2008 U.S. presidential race are everywhere: from intense voter interest, to candidate debates and references to telegenic politicians.

But no comparison may be more unexpected than that made on the front page of The Sun, a Fleet Street newspaper, which borrowed the iconic Barack Obama "Hope" campaign poster to endorse Conservative David Cameron. Cameron's image graces the newspaper with the message, "Our Only Hope" and underscores the strange bedfellow relationship that has developed between Cameron and President Obama.

Cameron and Obama are hardly ideological soul mates, as Obama's Democratic Party is by and large liberal, while Cameron's Tory party is conservative. But the two men have more in common than you might think. Cameron is relying on strategic advice from two well-known American political consultants, Anita Dunn and Bill Knapp. Dunn and Knapp were key advisors to Obama during his successful presidential bid and Dunn went on to work as the White House communications director for a period of time before returning to the private sector.

And British commentators have repeatedly compared Cameron's campaign style to that of Obama. On the final day of campaigning, Cameron dragged the media to a fish and chips restaurant in Scotland where he promptly purchased 26 meals for his campaign staff and the media. Virtually every commentator called the move distinctly Obama-like.

Pre-election polls had Cameron's Conservative Party in the lead, but perhaps not far enough ahead to win an outright majority of the seats in Parliament.

CNN will reveal exit polling at 5 p.m. ET on the Situation Room with Wolf Blitzer.

View the full front page of The Sun is below: 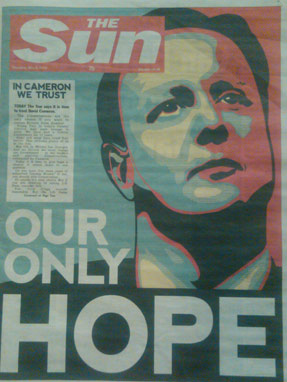