(CNN) - The Pentagon must hold down its spending and make choices that will anger "powerful people" in an era of economic strain, Defense Secretary Robert Gates said in a weekend speech in Kansas.

Increasing health care costs, a top-heavy uniformed and civilian management force, and big-ticket weapons systems are swelling the military's budget at an "unsustainable" rate, Gates said. In response, Gates said, he has ordered the Defense Department's military and civilian leaders to find savings of 2 to 3 percent - more than $10 billion of the Pentagon's roughly $550 billion base budget - and shift spending toward war-fighting costs.

"These savings must stem from root-and-branch changes that can be sustained and added to over time," he told an audience Saturday at the Eisenhower Presidential Library in Abilene. "Simply taking a few percent off the top of everything on a onetime basis will not do." 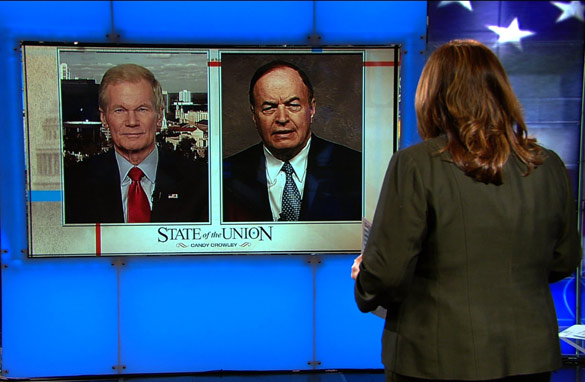 Two senators - one Democrat and one Republican - slammed the oil and gas industry Sunday along with the federal agency responsible for regulating the industry. (Photo Credit: CNN)

Washington (CNN) – A Democratic senator whose state is in the bulls’ eye of the massive oil spill swirling around the Gulf of Mexico said Sunday that the oil and gas industry has used its political muscle to frustrate past efforts to tighten regulations and increase safety precautions.

“’Big Oil’ wants its way,” Sen. Bill Nelson, D-Florida, said on CNN’s State of the Union, “They’ve been trying to bully their way to drill off the coast of Florida.” Nelson was responding to a suggestion from CNN Chief Political Correspondent Candy Crowley that Congress had failed in its oversight responsibility relating to the Minerals Management Service (“MMS”), the federal agency the regulates offshore drilling.

“’Big Oil’ has had its way among the regulators, the senator said. Nelson said the relationship between the industry and MMS is a “cozy” one and the Florida Democrat referenced embarrassing revelations about the MMS which both regulates the safety of oil and gas exploration and manages the federal government’s lucrative leases of federal land to the oil and gas industry.

“But shouldn’t Congress have some responsibility?” Crowley asked Nelson.
END_OF_DOCUMENT_TOKEN_TO_BE_REPLACED

Click to watch video
Washington (CNN) – Reflecting on the recent failed terrorism attack on Times Square, a Republican senator said Sunday that the United States may not be able to prevent every scheme designed to do harm.

“We can do everything we can to protect – but there will be some things that will slip up on us, no matter what,” Sen. Richard Shelby of Alabama, said on CNN’s State of the Union.

Shelby noted that the recent Times Square plot and last year’s failed attempt to blow up a U.S. airliner on Christmas Day had something in common - they were both carried out in the main by a single person. Those types of one-person operations make intelligence gathering and detection that much harder, he said.

“So if they keep doing this and they fan out all over the country, we’re going to have deep, deep challenges ahead in terms terrorism work,” Shelby told CNN Chief Political Correspondent Candy Crowley.

Later in the interview, Shelby said that law enforcement officials were lucky when it came to the botched Times Square plot. “It’s been said before: Luck shouldn’t be our policy,” said Shelby, “We’ve got to be more diligent. We’ve got to do more training. We’ve got to realize that individuals are dangerous by themselves especially when they’ve had training.”
END_OF_DOCUMENT_TOKEN_TO_BE_REPLACED

Obama told graduates at Virginia's Hampton University that he hoped their education had opened their minds, and added, "Now that your minds have been opened, it's up to you to keep them that way."

"And it will be up to you to open minds that remain closed that you meet along the way," Obama said. "That, after all, is the elemental test of any democracy: whether people with differing points of view can learn from each other, work with each other, and find a way forward together."

Quoting Thomas Jefferson, Obama said that "if a nation expects to be ignorant and free ... it expects what never was and never will be."

"What Jefferson recognized, like the rest of that gifted founding generation, was that in the long run, their improbable experiment - called America - wouldn't work if its citizens were uninformed, if its citizens were
apathetic, if its citizens checked out and left democracy to those who didn't have their best interests of all the people at heart," Obama said.
END_OF_DOCUMENT_TOKEN_TO_BE_REPLACED

"We are considering all of our options," Holder said on the NBC program "Meet the Press." "One possibility is filing a lawsuit."

Possible grounds for the lawsuit would be whether the Arizona law could lead to civil rights violations, Holder said. 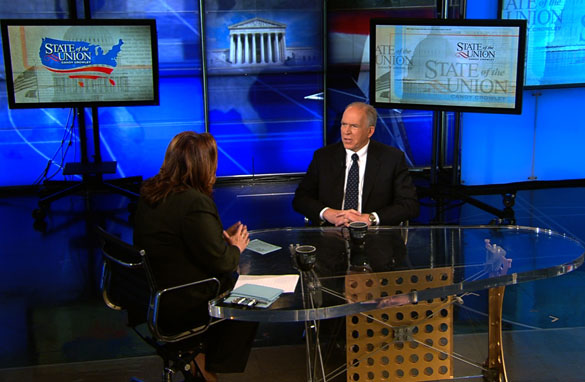 "It looks like he was working on behalf of the Pakistani Taliban," Obama counterterterrorism advsier John Brennan said Sunday on CNN. (Photo Credit: CNN)

John Brennan, the assistant to the president for counterterrorism and homeland security, told CNN's "State of the Union" that the ongoing investigation pointed to Faisal Shahzad having links to Tehrik-e-Taliban, known
as TTP.

"It looks like he was working on behalf of the Pakistani Taliban," Brennan said.

Watch: Brennan weighs in on Shahzad

The group, also known as the TTP, is "closely allied with al Qaeda" and has pledged to carry out attacks on other parts of the world, including the United States, Brennan said.

Washington (CNN) - President Obama is "very concerned" about Greece's economic crisis, sees mounting threats against the United States from non-state actors and wants to resolve the dispute with Russia over adoptions, he said in an interview released Saturday by the White House.

"I am very concerned about what's happening in Europe," Obama told the Russian television station Channel Rossiya in the wide-ranging interview, responding to a question about the Greek economic crisis.