[cnn-photo-caption image= http://i2.cdn.turner.com/cnn/2010/images/01/25/art.beaubiden3.gi.jpg caption="Beau Biden told supporters Saturday he will be back on the job soon."](CNN) – Four days after apparently suffering a mild stroke, Delaware Attorney General Beau Biden - the son of Vice President Joe Biden - told supporters he is ready to get back to work soon.

The comments came in a surprise phone call to participants of a fundraising event the vice president hosted Saturday morning on his son's behalf.

“I just wanted to call and let each and every one of you know how much I appreciate your support for me and for the family on so many levels,” the younger Biden said. “I’m looking forward to getting back to work and running for re-election as well.”

Biden is seeking reelection to a second term as Delaware’s top attorney. He recently served in Iraq for one year as a captain with the Delaware Army National Guard. He was considered a front-runner to fill his father's former U.S. Senate seat this November, but in January he announced he had decided against a run for higher office.

“I’m eager to continue [what] we started, that many of you helped me start in 2006,” the younger Biden also told supporters. “I can’t wait to see you all. I’ll be home real soon.”

END_OF_DOCUMENT_TOKEN_TO_BE_REPLACED

[cnn-photo-caption image= http://i2.cdn.turner.com/cnn/2010/images/05/15/art.lebron.jpg caption="Ohio Gov. Ted Strickland are among those pleading with LeBron James to remain a Cleveland Cavelier.'"](CNN) – Fans of nearly every NBA team would love to see Cleveland Cavalier great LeBron James in their uniform next year, but Ohio Sen. Sherrod Brown and Gov. Ted Strickland are trying to make sure that doesn’t happen.

The two politicians, along with a handful of other Ohio celebrities, star in a new web video imploring the NBA MVP to remain in Cleveland.

The video, a parody of the 1985 charity single “We Are the World,” features Brown and Strickland, among others, belting such lyrics as “Please stay LeBron, We really need you. No bigger market's gonna love you half as much as we do.”

Full lyrics after the jump

END_OF_DOCUMENT_TOKEN_TO_BE_REPLACED

“We often take it for granted, this cycle of life. We know, of course, that chance can change everything overnight. But we also rely on a certain order in our lives, a certain sense of security that lets us sleep safely in our beds and walk around our neighborhoods free from fear, and go about our daily lives without being the victims of crime,” Obama said.

“That sense of security doesn’t come on its own,” he continued. “What makes it possible - what makes freedom possible - are the law enforcement officers that we honor today. It’s men and women like so many of you. It’s anyone who’s ever put on a uniform or worn a badge in the name of law, in the name of order, in the name of protecting and defending the United States of America.”

The speech marked Peace Officers Memorial Day, a day of remembrance for law enforcement officials who have sacrificed their lives in the line of duty.

Obama’s full remarks after the jump

END_OF_DOCUMENT_TOKEN_TO_BE_REPLACED

[cnn-photo-caption image= http://i2.cdn.turner.com/cnn/2010/images/04/14/art.dc.gi.jpg caption="Some lawmakers are looking to cut ATM fees."]NEW YORK (CNNMoney.com) - As Congress debates the new rules of the road for the U.S. banking industry, some lawmakers have an ambitious proposal: They want to cut ATM fees.

Currently, banks and other ATM operators are free to charge consumers whatever they want for using their machine. And backers of the amendment maintain that those who tend feel the brunt of those fees are lower- and middle-income Americans, precisely those who can't afford it. 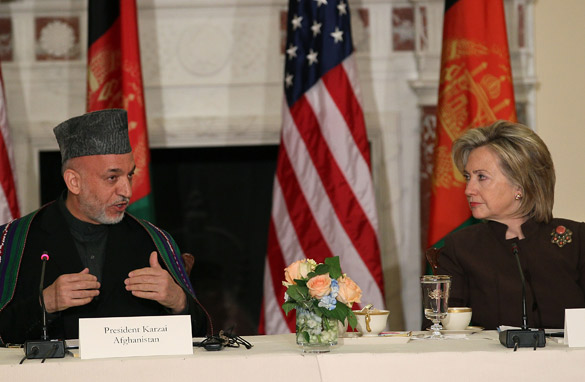 The comments from Lee, who represents the suburbs of Buffalo and Rochester, come two days after Obama visited Buffalo to promote the economic reform bill now being debated in the Senate.

“President Obama visited our area this week, and it was my hope that he would listen – really listen – to what the people are saying,” Lee says in the address. “I’ve been in Congress now 16 months, but it doesn’t take that long to figure out that Washington does more talking than listening. And it certainly does more spending than saving, often in the name of creating jobs that never seem to come.”

“Consider this: since President Obama was sworn into office, our national debt has risen by more than $2 trillion to a record $12.9 trillion. In just two more years, according to the President’s own estimates, our national debt will surpass the size of our entire economy,” Lee also says in the address. “And unless we change course, our debt will reach levels now being experienced by Greece, whose debt is projected to reach 125 percent of its economy this year. Greece is already in the process of receiving an international bailout.”

Full transcript after the jump:

END_OF_DOCUMENT_TOKEN_TO_BE_REPLACED

“You’ll be empowered with the clear and concise information you need to make the choices that are best for you. We’ll help stop predatory practices, and curb unscrupulous lenders, helping secure your family’s financial future,” Obama says in the address.

It is expected the bill, which has attracted little Republican support, will face a vote by the end of next week.

Transcript of Obama’s full address after the jump

END_OF_DOCUMENT_TOKEN_TO_BE_REPLACED

Palin does a bit of stand up

In what can only be described as a bit of a schtick, Palin had some fun Friday with the notion that she and her family might be rednecks.

Speaking at the National Rifle Association's annual meeting in Charlotte, North Carolina, Palin claimed that some in the media have tried to portray members of the Tea Party movement as "violent or racist or rednecks."

"And I don't really have a problem with the redneck part of it, to tell you the truth. I don't," the former vice presidential candidate told the crowd. "That's fine with me."

Palin told the gun rights supporters how she recently searched online for the best redneck jokes to prepare for an appearance in Alabama where she was introduced by a radio personality named "Bubba."

"But, I'm reading them [thinking] these aren't funny, these are me," Palin said to laughter. "They really are."