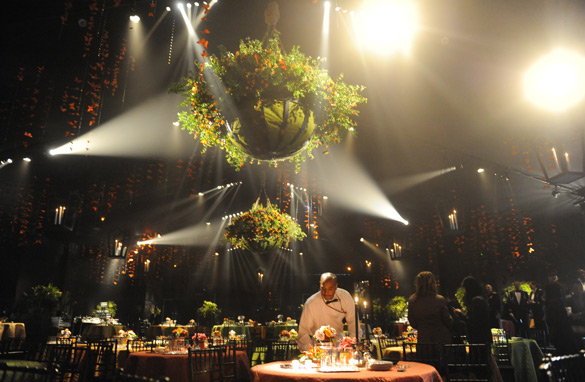 Obama must certainly hope the focus this time will be on the event itself, rather than gate-crashers who dominated the media coverage of his first State Dinner in November. This time, the White House promises enhanced security measures to keep out the uninvited.

There will be marzipan and chocolate flowers, tables bedecked in three shades of blue to resemble rippling water, and a separate tent decorated to look like Monarch butterflies in flight for after-dinner music by Beyonce and others.

The dinner in the East Room will be the eighth honoring Mexico, all since 1967, reflecting the growing importance of the U.S. southern neighbor in the past half-century.

According to background information from the White House, guests will sit at tables for 10, some rectangular and some round. The head table with both first couples will seat 20 people.

"Tables will be covered in boldly striped linens made in three hues of Mayan blue," the document said. "The colors resemble ripples of water."

The china, from the White House collection, will be from the Clinton and Eisenhower presidencies for a meal accenting both American and Mexican cuisine. Guests will dine on jicama and fruit in a citrus vinaigrette and ceviche of Hawaiian opah, followed by Oregon beef in Oaxacan black mole with black bean tamalon and grilled green beans.

After the meal, the diners will move into a tent erected on the South Lawn to be joined by additional guests for performances by pop star Beyonce and Mexican performers Rodrigo y Gabriela, along with the President's Own United States Marine Band.

In a tribute to Calderon's birthplace of Michoacan, Mexico, where the Monarch butterfly makes its annual pilgrimage from Canada each spring, guests walking into the tent "will experience the sense of Monarch butterflies in flight," the White House said.