[cnn-photo-caption image= http://i2.cdn.turner.com/cnn/2010/images/05/27/art.jerrybrown.0527.gi.jpg caption ="Jerry Brown’s gubernatorial campaign reported Thursday that the California attorney general has 20.6 million dollars in the bank."](CNN) - California Attorney General and Democratic gubernatorial candidate Jerry Brown appears to be building up his warchest for what will likely be a very expensive general election.

Brown's campaign reports Thursday that the candidate has $20.6 million dollars in the bank for his bid for governor. The campaign also says that Brown's raised $21.4 million dollars since the beginning of the year and has spent a mere $246,000 in 2010. Brown, a former two-term governor from 1975-1983, faces no serious opposition in next month's Democratic primary.

In the battle for California's Republican gubernatorial nomination, former eBay CEO Meg Whitman, a billionaire, has already spent nearly $70 million of her own money. Her opponent, California Insurance Commissioner Steve Poizner, a multi-millionaire, has spent more than $20 million of his money on his campaign.

California holds its primary on June 8.

[cnn-photo-caption image= http://i2.cdn.turner.com/cnn/2010/images/05/27/art.obama.bp.jpg caption="President Obama announced new steps to limit oil drilling on Thursday."]Washington (CNN) - A stern-faced President Barack Obama on Thursday announced steps to limit new oil drilling and exploration as the investigation of the Gulf of Mexico oil spill continues, telling the American people that he is "fully engaged" and ultimately responsible for what he called a catastrophe.

Obama's announcement was in response to the deadly April 20 explosion on a Gulf of Mexico oil rig that triggered a devastating oil spill. New federal estimates Thursday determined the spill is likely the largest in U.S. history, with oil already coating parts of the Louisiana coast and the eventual impacts still unclear.

The new steps announced Thursday were in response to a report on the Gulf spill by Interior Secretary Ken Salazar that Obama ordered last month. Salazar briefed Obama and senior advisers on the report Wednesday night.

Obama said the government would seek aggressive new operating standards and requirements for offshore oil companies. For now, he said, the government was suspending planned oil exploration of two locations off the coast of Alaska, canceling pending lease sales in the Gulf of Mexico and the proposed lease sale off Virginia, and halting the issuance of new permits for deep-water wells for six months.

END_OF_DOCUMENT_TOKEN_TO_BE_REPLACED

Rice to write memoir about her White House years

Rice spoke at an author panel during the 10th annual Book Expo America, a gathering of publishing and book retailers held at New York's Javits Center. Also on hand was moderator and Daily Show host Jon Stewart, who sheepishly admitted as he introduced Rice: "I am not particularly familiar with her work–but I hear good things."

After thanking Stewart for his 'stirring introduction,' Rice said she felt could not yet write a White House memoir until people understood the "personal and implausible journey" she had taken from being born in 1950s segregated Alabama to being named the first female African-American to lead the State Department. All of this happened, Rice said, due to her parents, John and Angelena Rice.

A guidance counselor/preacher and school teacher respectively, Mr. And Mrs. Rice never made more than $60,000 annually, Rice said. Yet they "believed in the transformative power of education and the armor of control it can put around you," she said.

END_OF_DOCUMENT_TOKEN_TO_BE_REPLACED

Washington (CNN) - Vowing to continue to "underwrite global security" - but not alone - the Obama administration Thursday released its first National Security Strategy, a 52-page outline of the president's strategic approach and priorities.

The NSS, required by Congress of every administration to be prepared every four years, for the first time combines homeland security and national security, focusing not only on threats internationally but on the threat of home-grown radicals inspired and recruited by al Qaeda.

"We view this as an important and emerging challenge," Ben Rhodes, deputy national security adviser for strategic communication, told reporters. Al Qaeda, he said, is less capable of using safe havens for training abroad and is now "trying to inspire Americans to carry out attacks on the U.S."

Those Americans, he said, may have less direct contact with the terrorist organization but they carry American passports and know the strengths and weaknesses of the United States.

"Several recent incidents of violent extremists in the United States who are committed to fighting here and abroad have underscored the threat to the United States and our interests posed by individuals radicalized at home," the NSS states. "Our best defenses against this threat are well informed and equipped families, local communities and institutions." 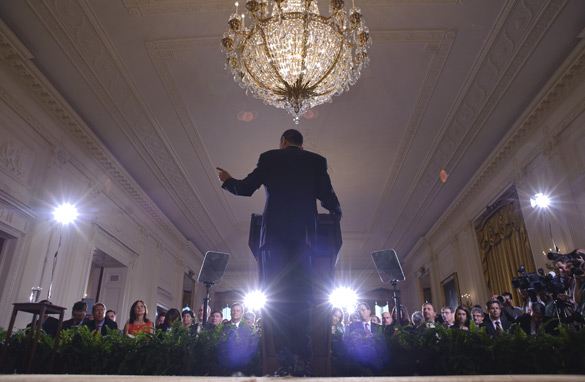 President Obama, who has come under blistering criticism for not doing enough in response to the spill, said at a news conference Thursday that ‘those who think we were slow’ in responding to the spill ‘don't know the facts.’ (PHOTO CREDIT: Getty Images)

RedState editor to Haley accuser: 'Shut the hell up'

[cnn-photo-caption image= http://i2.cdn.turner.com/cnn/2010/images/05/27/art.nikkihaley8.nh.jpg caption ="Erick Erickson wrote Wednesday that until a South Carolina blogger can produce definitive evidence of an affair he claims he had with gubernatorial candidate Nikki Haley (pictured), he should ‘shut the hell up.’"](CNN) - South Carolina blogger Will Folks defended himself Wednesday after Erick Erickson, the editor of the influential conservative website RedState.com, accused Folks of lying about having an affair with gubernatorial candidate Nikki Haley.

Erickson, a CNN contributor, accused Folks of "pulling the noose" on a "high-tech lynching" of Haley to gin up traffic for his website and torpedo her campaign. Haley is Erickson's preferred candidate in the four-way South Carolina Republican primary race.

Unless he produces definitive evidence of an affair, Erickson wrote, Folks should "shut the hell up."

Folks produced text messages between himself and the Haley campaign Tuesday that he said backed up his assertion that he supported Haley's bid and was working with her to keep reporters and political rivals away from the rumor.

END_OF_DOCUMENT_TOKEN_TO_BE_REPLACED

President Obama: government is 'in charge' of response effort in Gulf

(CNN) - President Barack Obama said Thursday that the federal government is "in charge" of the Gulf oil spill response effort. "BP is operating at our direction," he said.

Coach K gets 'payback' from Obama

"Now, I know that all of you remember last year, when I filled out my bracket. I picked North Carolina to win it all. It wasn't anything personal. Just trying to win some money. I was right. Coach K wasn't too happy. He basically told me to stick it. Or stick to my day job, is what he said," referring to Coach Mike Krzyzewski, who was standing next to the president in the Rose Garden.

"And then, this year, he went out with all these guys and he won, so he could come to the White House and crow about it. Payback is sweet, isn't it, Coach? Congratulations on your fourth National Championship at Duke."

This year the president chose Kansas, Kansas State, Kentucky and Villanova to make the Final Four

One thing the two men have in common: some advice they have given to Reggie Love, who used to play for Duke and is now the president's assistant.

"Coach and I were both discussing - I play with Reggie now, and when Reggie was playing, Coach said, don't shoot. And when he's on my team, I say to Reggie, don't shoot. So things haven't changed that much. Go down in the post, rebound," the president said to a roar of laughter from the audience.

END_OF_DOCUMENT_TOKEN_TO_BE_REPLACED

The Minerals Management Service (MMS) is involved in federal oversight of offshore oil drilling. Birnbaum's resignation letter cast her decision to leave as a consequence of a decision to reorganize the agency following April's explosion of the Deepwater Horizon oil rig in the Gulf of Mexico. The explosion resulted in a massive oil spill that well owner BP and federal authorities are still trying to cap.

"As you move forward with the reorganization of Minerals Management Service, you will be requiring ... new leaders," Birnbaum wrote in a letter to Interior Secretary Ken Salazar.

President Barack Obama said Thursday that he didn't know whether Birnbaum had been fired or chose to resign on her own. Speaking before a House subcommittee, Salazar insisted Birnbaum had resigned "on her own terms and own volition."

She "is a strong and very effective person who ... helped us break through the very difficult things which we have a lot more work to do," Salazar said. "She helped us with addressing a very broken system. And all I can really [say] is that she is a good public servant."

Birnbaum, a former high level staffer on Capitol Hill, became head of the MMS in July 2009.

A recently released federal report highlighted what many observers have characterized as widespread corruption at the agency. Among other things, the report, issued by the Interior Department's inspector general, revealed that federal inspectors overseeing oil drilling in the Gulf of Mexico accepted meals and tickets to sporting events from companies they monitored.

END_OF_DOCUMENT_TOKEN_TO_BE_REPLACED

[cnn-photo-caption image= http://i2.cdn.turner.com/cnn/2010/images/05/27/art.blumenthal.0527y.gi.jpg caption ="A new poll released Thursday has Richard Blumenthal holding a 56 to 31 point lead over his challenger for Senate."](CNN) - A new poll suggests that the controversy surrounding Democratic Senate nominee and Connecticut Attorney General Richard Blumenthal's misstating of his military record during the Vietnam War does not seem to be hurting him with most state voters.

A Quinnipiac University survey released Thursday indicates that more than six out of ten Connecticut voters say the controversy doesn't make a difference to their decision in the Senate election, with a third questioned saying it makes them less likely to vote for Blumenthal.

According to the poll, 56 percent say they back Blumenthal, with 31 percent supporting former professional wrestling executive Linda McMahon, in a likely general election matchup. One in ten were undecided. Blumenthal's 25 point advantage is down from a 33 point lead in a March poll conducted by Quinnipiac University.

"It looks like Connecticut voters forgive Attorney General Richard Blumenthal, or feel that there is nothing to forgive in the Vietnam service flap. While he has taken a hit with voters, his poll numbers were so high to begin with that he still maintains a commanding lead over Linda McMahon," says Quinnipiac University Poll Director Douglas Schwartz.