Obama to meet Tuesday with heads of oil spill commission

[cnn-photo-caption image= http://i2.cdn.turner.com/cnn/2010/images/05/31/art.getty.obama.3.4.jpg caption="Presdent Obama will hold meetings on Tuesday about the Gulf oil spill."]Washington (CNN) - President Barack Obama will meet Tuesday at the White House with former Sen. Bob Graham of Florida and former Environmental Protection Agency administrator William Reilly, the co-chairs of a new presidential commission investigating how to prevent another oil spill like the devastating leak in the Gulf of Mexico.

White House aides said Obama will make public comments after he meets with Graham and Reilly, new co-chairs of the National Commission on the BP Deepwater Horizon Oil Spill and Offshore Drilling, which Obama created earlier this month by executive order.

Administration officials have said that five other people will soon be selected to serve on the seven-person commission. The other panel members are likely to come from outside government because of allegations that government officials at the federal, state, and local level have been too cozy with people in the oil industry they are supposed to oversee.

The commission has six months to issue a report to Obama with recommendations on how to prevent future spills resulting from offshore drilling.

END_OF_DOCUMENT_TOKEN_TO_BE_REPLACED

Washington (CNN) – The drawdown of U.S. forces in Iraq remains on track, and the military will meet the troop level benchmark laid out by President Obama, according to the Army Chief of Staff.

In an interview with CNN Chief National Correspondent John King, Gen. George Casey said the military is slated to reduce troop levels to 50,000 by the end of August.

"[I]t's something we've been working on with the leadership in Iraq for more than 18 months. We have been gradually moving the extra equipment and things out. There's a great plan in place and we're executing that plan right now," Casey said on CNN's John King, USA.

The U.S. now has more troops in Afghanistan than Iraq for the first time since 2003.

When asked about the need for additional resources in Afghanistan - beyond the 30,000 additional troops scheduled to be deployed there - Casey said the number should be sufficient.

END_OF_DOCUMENT_TOKEN_TO_BE_REPLACED

[cnn-photo-caption image= http://i2.cdn.turner.com/cnn/2010/images/05/31/art.markey.gi.jpg caption="Ed Markey holds up a container filled with oil taken from the Gulf of Mexico."]Washington (CNN) - Rep. Edward Markey on Monday challenged the assertion by oil giant BP's chief executive that no underwater oil plumes have formed because of the Gulf of Mexico spill.

In a letter to BP, Markey, D-Massachusetts, said scientific evidence showed such plumes have formed and he asked for BP CEO Tony Hayward to provide evidence to back up Hayward's claim Sunday that the spilled oil had gone to the surface.

On Sunday, Markey, who heads the House Energy and Environment subcommittee, had accused BP of issuing false statements about the oil spill.

"BP in this instance means 'Blind to Plumes,'" Markey said in a statement Monday.

There was no immediate response from BP.

Markey's letter to BP said "the confirmation of the presence of large quantities of oil sub-surface could help to inform clean-up and response efforts, and it is vital that there is unfettered access to all relevant data or analysis."

In a separate letter Monday to BP, Markey called for complete transparency regarding video feeds of the company's underwater operations. BP is launching a new effort to cut an opening to the leaking equipment so that a containment dome can be lowered on it.

"There cannot be any delay or gaps in our understanding of this situation, given that thousands of barrels of oil are spewing forth each day into the Gulf, with catastrophic long-term consequences," said Markey's letter to BP America head Lamar McKay, later adding: "BP should not be controlling the view the American public has of this disaster in our ocean."

Elwood, Illinois (CNN) - A little rain never hurt anyone, but a torrential downpour and lightning strikes kept President Barack Obama from commemorating Memorial Day as he had planned.

A major rainstorm soaked the president and crowd at Monday's Memorial Day event at the Abraham Lincoln National Cemetery in Illinois.

"We are a little bit concerned about lightning. This may not be safe," Obama told the crowd. "I know that all of you are here to commemorate the fallen and that's why we're here."

The president then asked the crowd to move to their cars and wait out the storm, saying he would return if the weather passed. His motorcade left the cemetery once before doubling back when the storm slowed.

Obama was able to greet some crowd members on a bus parked at the cemetery, but never returned to the stage.

Instead, he left the cemetery and met with families of veterans and service members living at the recently opened Chicago-area Fisher House, which services the Hines VA Hospital.

END_OF_DOCUMENT_TOKEN_TO_BE_REPLACED 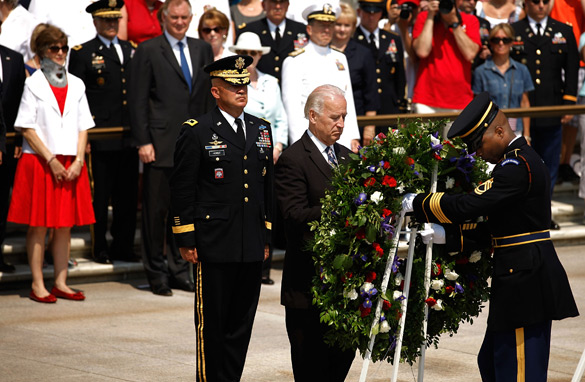 Arlington, Virginia (CNN) - Vice President Joe Biden led Americans in every corner of the country and around the world Monday morning in pausing to remember the sacrifices of those who have fallen in military service to the country.

The vice president marked Memorial Day with a tradition wreath-laying ceremony at Arlington National Cemetery, followed by remarks in which he praised "the finest military the world has ever produced."

President Barack Obama was scheduled to spend the day in his home state of Illinois, marking the holiday with remarks at the Abraham Lincoln National Cemetery, about an hour outside of Chicago.

"Today is a day [in] which sorrow mixes with incredible pride," Biden said. "We mourn those we lost and we hold fast to their memories. ... May God continue to bless the memory of all those who have died [so] that we may live."

Netanyahu also decided to cut short a visit to Canada and return to Israel, according to an e-mail statement from his media adviser.

Netanyahu's cancellation of the meeting came in the wake of international condemnation of Israel after Israeli soldiers stormed a flotilla of ships carrying aid intended for Palestinians in Gaza, leaving at least nine people dead in the resulting violence.

Israel claimed it was defending itself, with the Israel Defense Forces saying the soldiers' lives were in danger after they were attacked with "severe physical violence, including live fire, weapons, knives and clubs."

Several nations, however, have condemned the military action and called for an investigation.

Obama spoke on the phone with Netanyahu Monday morning, according to a statement from the White House press office. He "said he understood the prime minister's decision to return immediately to Israel to deal with today's events ... (and) agreed to reschedule their meeting at the first opportunity."

END_OF_DOCUMENT_TOKEN_TO_BE_REPLACED

Washington (CNN) - As Americans mark Memorial Day, a new national poll indicates that support for President Barack Obama's planned removal of U.S. troops from Iraq by the end of the August could drop significantly if Iraq cannot solve its current problems in time.

According to a CNN/Opinion Research Corporation survey released Saturday,64 percent of Americans favor the president's plan to keep just 50,000 U.S. troops in Iraq by the end of the summer, with 35 percent opposed.

But public approval of the plan falls to 51 percent if Iraq does not have a stable government by August and there is widespread violence at that time, with opposition rising to 48 percent.

"Support drops more than 20 points among Americans with a college education and among suburbanites," said CNN Polling Director Keating Holland. "But among people who never attended college, opinion barely changes. The same is true for people who live in rural areas."

END_OF_DOCUMENT_TOKEN_TO_BE_REPLACED

A USC/Los Angeles Times survey released Monday indicates that 50 percent of California voters favor the Arizona measure, with 43 percent opposed and five percent unsure. Support for the law is higher in most national polls conducted over the past two months.

"California voters support the Arizona law, but not nearly by the margins we've seen in other parts of the country, " says Dan Schnur, director of the Jesse M. Unruh Institute of Politics at USC.

The recently enacted Arizona law initially allowed police to ask anyone for proof of legal U.S. residency, based solely on a police officer's suspicion that the person might be in the country illegally. Arizona lawmakers soon amended the law so that officers could check a person's status only if the person had been stopped or arrested for another reason.