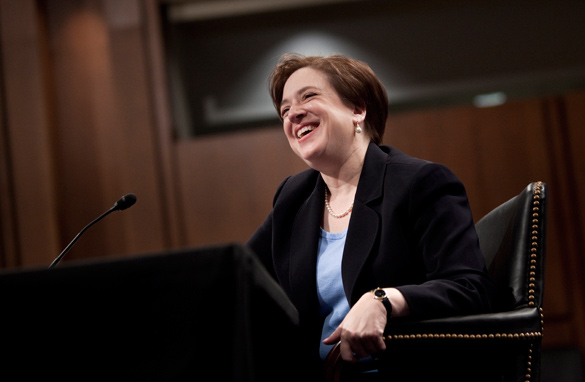 Kagan's candid but cautious approach in three days of hearings looks like it came out of the playbook John Roberts used when he went before senators in 2005. (Photo Credit: Getty Images)

Washington (CNN) - If confirmed to the Supreme Court as expected, Elena Kagan would work with and independently of Chief Justice John Roberts. That's the nature of the court's internal dynamics, and the concept of the one justice-one vote system in which the chief justice is often called "first among equals."

Roberts' five-year leadership of the nine-member court has frequently been as much a part of Kagan's Senate confirmation hearing this week as the nominee herself. Despite their clear ideological differences, it has been striking how much these two clearly bright legal minds share.

Kagan's candid but cautious approach in three days of hearings looks like it came out of the playbook Roberts used when he went before senators in 2005. She concluded her testimony Wednesday relatively unscathed, clearing the path for a likely confirmation in coming weeks.

The potential sites for the convention, to be held during the week of September 3, 2012, are St. Louis, Charlotte, Minneapolis and Cleveland.

"Throughout this summer, our team will visit these four cities to determine which is the best locale to host our 46th National Convention," DNC chairman Tim Kaine said in an email to committee members announcing the finalists. "We look forward to our continued work to ensure that the Democratic National Convention of 2012 is the best that it can be."

The DNC will select the host city "at some point before the end of the year," a party official told CNN.

Last month, the Republican National Committee's site selection committee recommended Tampa, Florida as the host city for their 2012 convention. The RNC is expected to finalize that decision at their summer meeting in August.

Washington (CNNMoney.com) - The House voted 237-192 Wednesday to pass a sweeping package of reforms to the financial regulatory system, moving the bill a step closer to the finish line.

But the Senate isn't likely to take up the measure until the week of July 12. And it's not clear whether Democrats have secured the votes they need.

After more than 18 months of negotiation and debate, the bill aims to strengthen consumer protection, shine a light on complex financial products and establish a new process for shutting down giant financial firms in trouble.

Washington (CNN) - The Federal government is the world's largest purchaser but taxpayers don't get the most value for their buck as Uncle Sam isn't saving the way Aunt Thelma does with her regular trips to Costco-by buying in bulk.

The government's top purchaser is trying to change exactly that.

While the federal government is the world's largest purchaser, its spending is traditionally fragmented across many agencies, Orszag added.

END_OF_DOCUMENT_TOKEN_TO_BE_REPLACED

Racine, Wisconsin (CNN) –President Obama loves to tell audiences across the country that he enjoys getting away from Washington.

At a town hall meeting in Racine, Wisconsin Wednesday, it was no different.

"It's just nice to get out of Washington, I love Washington but I have to tell you, you know, it's good to escape the heat and hot air," Obama said.

It's not just the 90-degree temperatures Obama was referring to, but the heated political climate that's been intensified by the upcoming midterm elections.

END_OF_DOCUMENT_TOKEN_TO_BE_REPLACED

The panel now will hold a private session with Kagan on classified information, and then hear from witnesses for and against her nomination on Thursday.

Perry's Political Director David White and Central Texas Field Director Jon McClellan challenged each other to see who could raise the most money for the Perry campaign in a 24-hour period. The loser had to receive a buzz-cut.

In last 24 hours, White and McClellan raised more than $15,000 together, said Perry's press secretary, Alejandro Garcia. Garcia could not specify how much each participant raised individually but confirmed that McClellan did receive a buzz-cut.

END_OF_DOCUMENT_TOKEN_TO_BE_REPLACED

(CNN) - Rep. Pete Stark must like going viral, at least amongst his conservative detractors.

"Who are you going to kill today?" is how he solicited a question from a self-proclaimed Minuteman - the volunteer organization, which tries to prevent illegal crossings of the U.S. border - at a recent town hall meeting in Fremont, California. It went from there.

The questioner continued, seen on a video posted by The Golden Gate Minuteman on Youtube, questioning the California Democrat over what the government will do to "to seal our borders so that we're a solvent country again."

Stark's answer: "We can't get enough Minuteman armed. We'd like to get all the Minuteman armed so they could stop shooting the people here," Stark said.

END_OF_DOCUMENT_TOKEN_TO_BE_REPLACED

“The President should be focused on solving the problems of the American people – stopping the leaking oil and cleaning up the Gulf, scrapping his job-killing agenda, repealing and replacing ObamaCare – instead of my choice of metaphors.

“Attacking Republicans is a lot easier than explaining to the citizens of Racine, who face 14 percent unemployment, why one in every 10 Americans in our workforce is unemployed nearly 18 months after the president’s trillion-dollar ‘stimulus’ spending bill was enacted.”

“I wasn’t minimizing the crisis America faced – I was pointing out that Washington Democrats have produced a bill that will actually kill more jobs and make the situation worse. It does nothing to reform Fannie Mae and Freddie Mac, the government mortgage companies that caused the housing and financial crisis by giving risky loans to people who couldn’t possibly pay them back. Republicans have a better solution that ends the bailouts, ends ‘too big to fail,’ and reforms Fannie Mae and Freddie Mac.

“The American people want leadership from the White House, not more childish partisanship.”

Racine, Wisconsin (CNN) - President Barack Obama acknowledged Wednesday that the federal deficit is a significant concern, but he also criticized Republicans for obstructing what he called commonsense legislation and siding with big business.

In a campaign-style speech and in answering questions from a crowd of about 1,400 people in economically hard-hit Racine, Wisconsin, Obama depicted Republican opponents as obstructionists to necessary progress for continuing recovery from what the president called "the great recession" that started under the previous GOP administration.

"We already tried the other side's ideas," Obama said, adding that the choice now facing the nation is to "return to the failed economic policies of the past" or to keep working to build a stronger future.