Administration to end joint briefings on oil spill with BP

[cnn-photo-caption image= http://i2.cdn.turner.com/cnn/2010/images/06/01/art.boallen0601.gi.jpg caption="Former Coast Guard Commandant Adm. Thad Allen, pictured here with President Obama, will now handle the administration's daily briefings on his own, CNN has learned."]
Washington (CNN) - The Obama administration will no longer do joint briefings with BP on the Gulf of Mexico oil spill, and instead will have former Coast Guard Commandant Adm. Thad Allen handle the daily briefings on his own, senior administration officials told CNN on Tuesday.

According to the senior administration officials, the change is an effort to control the message, release accurate information about the oil spill and speak in one voice to deliver the daily message on latest developments.

Allen, the administration's point man on the oil spill, later told reporters in New Orleans that his job is to speak "very frankly with the American public."

"I think we need to be communicating with the American people through my voice as the national incident commander," he said.

The move comes amid growing frustration from the White House that BP is delivering inaccurate information and not being transparent, said the senior administration officials, who spoke on condition of not being identified by name.
END_OF_DOCUMENT_TOKEN_TO_BE_REPLACED

(CNN) - Three primaries, a re-election campaign in Delaware and Al and Tipper going their separate ways. A lot for one podcast with CNN's John Lisk and CNN Deputy Political Director Paul Steinhauser.

The high court upheld the murder conviction of a man who did not verbally assert his right to remain silent during his police interrogation. In a 5-4 ruling, the court said a suspect must explicitly tell officers he or she is asserting that right, known as Miranda rights.

The famous constitutional "right to remain silent" and the "right to talk to a lawyer before answering any questions" are among the well-known warnings all criminal suspects must be given upon arrest. The conservative court has generally been supportive in recent years, when police challenges to Miranda rights have been raised.

"A suspect who has received and understood the Miranda warnings, and has not invoked his Miranda rights, waives the right to remain silent by making an uncoerced statement to police," said Justice Anthony Kennedy, writing for the court.

END_OF_DOCUMENT_TOKEN_TO_BE_REPLACED 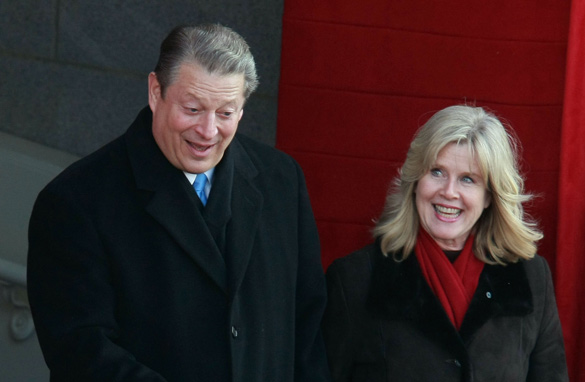 The Gores, shown here at President Obama's inauguration, have decided to separate after 40 years of marriage. (Photo Credit: Getty Images/File)

"We are announcing today that after a great deal of thought and discussion, we have decided to separate," the message said. "This is very much a mutual and mutually supportive decision that we have made together following a process of long and careful consideration. We ask for respect for our privacy and that of our family, and we do not intend to comment further."

Gore spokeswoman Kalee Kreider confirmed the authenticity of the e-mail but declined to comment further.

The couple, married for 40 years, has four grown children and three grandchildren.
END_OF_DOCUMENT_TOKEN_TO_BE_REPLACED

The seven-member panel, headed by former Sen. Bob Graham, D-Florida, and former EPA Administrator William Reilly, will "thoroughly examine the (BP oil) spill and its causes so we never face such a catastrophe again," Obama said at the White House. Graham and Reilly joined the president for the announcement.

"We owe all those who've been harmed, as well as future generations, a full and vigorous accounting of the events that led to what has now become the worst oil spill in U.S. history," Obama said. "Only then can we be assured that deep-water drilling can take place safely. ... Only then can we be confident that we've done what's necessary to prevent history from repeating itself."

Obama, who recently created the commission through an executive order, noted that the panel is authorized to hold public hearings and "request information from government, from not-for-profit organizations, and from experts in the oil and gas industry ... as well as from relevant companies, including BP, Transocean, Halliburton and others."
END_OF_DOCUMENT_TOKEN_TO_BE_REPLACED

Washington (CNN) – Ronald Reagan is the father of Foursquare. At least that's what O'Reilly Media CEO and founder Tim O'Reilly said in his keynote presentation at last week's Gov 2.0 Expo in Washington.

That decision ultimately enabled new location-based social networks such as Foursquare or Gowalla to use GPS technology and change the way friends interact with each other. Reagan's opening of the GPS data to citizens was an early example of "open government."

O'Reilly co-produced the Gov 2.0 Expo, which brought together government officials, venture capitalists, large technology companies, entrepreneurs and individuals to discuss the latest trends in how the government is using transformative technologies to foster further innovation.

The Obama administration's early commitment to openness with government information has made Gov 2.0 an emerging business sector in America.

"Data is available to anyone who wants to do something with it," said Mark Drapeau, the Director of Innovative Social Engagement at Microsoft and a co-chair of the Expo. "The government does not have all the ideas and skills, but citizens have all the opportunities due to new and open technologies."
END_OF_DOCUMENT_TOKEN_TO_BE_REPLACED

(CNN) - U.S. Attorney General Eric Holder will head to the Gulf Coast Tuesday to survey the BP oil spill and meet with state attorneys general and federal prosecutors from Louisiana, Alabama and Mississippi, according to the Justice Department.

Last month a group of senators - including Environment and Public Works Committee Chair Sen. Barbara Boxer, D-California - sent Holder a letter expressing concerns "about the truthfulness and accuracy of statements submitted by BP to the government in its initial exploration plan for the site," and asking Holder to investigate possible criminal and civil wrongdoing.

But in a reply to that letter last week, a Justice Department official did not say whether a criminal investigation had begun.

"The Department of Justice will take all necessary and appropriate steps to ensure that those responsible for this tragic series of events are held fully accountable," Assistant Attorney General Ronald Welch wrote.

Holder said last month that the Justice Department would "ensure that BP is held liable."

Click to watch video
(CNN) – One of former President George W. Bush's daughters is aiming to change the face of global public health and she intends to use members of her generation to do it.

Former first daughter Barbara Bush's new non-profit, Global Health Corps, was inspired by a 2003 trip that she took with her parents to five African countries. The Bush family was in Africa at the time promoting the Bush administration's anti-AIDS initiative.

A visit to a health clinic for people battling HIV opened Barbara Bush's eyes to how she might make a difference in the health field.

"I think that was the first time that – I was not pre-med; I hadn't studied health – that was the first time that I thought well maybe, what am I doing? Maybe I should focus on this," the Bush daughter said in an interview Tuesday on CNN's American Morning. "And I can. You really can work in the health field even if you're not a doctor or a nurse."

Bush decided to take that premise and use it as the foundation of Global Health Corps, a non-profit that recruits young professionals who are age 30 or younger to work for a year in health organizations.

"They're not doctors or nurses. They're filling any needs that the organizations have. And what we've found is all of our partners want people with technology skills. They want program management skills. They want monitoring and evaluation support. They just want general program support – which are skills that tons of people have. They just don't know they can use them in the health field."

For example, Bush said one participant in the non-profit's first crop of fellows is a former Google employee with a background in product management who is now working on health management information systems in Tanzania.
END_OF_DOCUMENT_TOKEN_TO_BE_REPLACED

[cnn-photo-caption image= http://i2.cdn.turner.com/cnn/2010/images/06/01/art.okeefe.gi.jpg caption="James O'Keefe said Tuesday that he doesn't regret his attempt to tamper with Sen. Mary Landrieu's phone system."](CNN) – The conservative videographer who plead guilty to entering federal property under false pretenses following an attempt to access Sen. Mary Landrieu's office phone system says that if given the chance, he'd do it again.

"I'd do it again, I might do it differently," James O'Keefe told ABC's George Stephanopoulos on Tuesday.

"I don't regret what I did," O'Keefe said before adding, "Senators are corrupt, politicians are corrupt. These people have to be investigated."

When asked by Stephanopoulos if he would intentionally break the law again, O'Keefe indicated he would alter his methods.

"I might do it a little differently," O'Keefe said.

O'Keefe is one of four men arrested in January. Two of the group posed as telephone repair workers to get into Landrieu's office while O'Keefe secretly videotaped the incident.

Throughout the interview, O'Keefe defends his methods, saying, "This is not a left or right thing. This is about exposing corruption."

END_OF_DOCUMENT_TOKEN_TO_BE_REPLACED

[cnn-photo-caption image= http://i2.cdn.turner.com/cnn/2010/images/05/31/art.gov.riley.gi.jpg caption="With Alabama Gov. Bob Riley out of the mix, a slew of candidates are vying for both the Democratic and Republican gubernatorial nominations. "](CNN) - The polls are now open in three states - Alabama, Mississippi, and New Mexico - holding primaries Tuesday, and in one of those states voters could make history.

Two-term Gov. Bob Riley, a Republican, is prevented from running for re-election.

New Mexico also holds gubernatorial primaries Tuesday. Five candidates are battling for the GOP nomination. The winner will face off in November against Lt. Gov. Diane Denish, who is unopposed in the Democratic primary. Two-term Gov. Bill Richardson, a Democrat, is prevented from running for another term in office.