Poll: Voters give Congress thumbs down 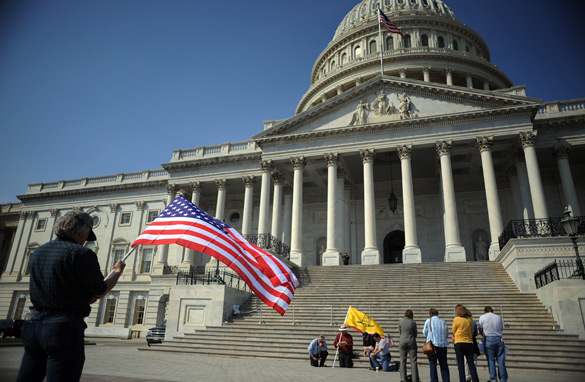 A new national poll suggests that Americans' support for their member of Congress is at an all time low. (PHOTO CREDIT: Getty Images/File)

Washington (CNN) - As voters in 12 states cast ballots today, a new national poll suggests that Americans' support for their member of Congress is at an all time low.

According to an ABC News/Washington Post survey released Tuesday, only 29 percent of the public says they are inclined to vote for their member of the House of Representatives in November's midterm elections. That level is even lower than in 1994, when voters swept the Democrats out of power in both the House and Senate.

A CNN/Opinion Research Corporation poll conducted late last month also indicated that this is shaping up to be an anti-incumbent year. Forty-seven percent of registered voters questioned in the survey said they were more likely to vote for a challenger than an incumbent, with only three in ten saying they'd back the incumbent.

The ABC News/Washington Post poll indicates that 26 percent approve of the job Congress is doing, with more than seven in ten saying they disapprove of how federal lawmakers are performing. Congressional approval stood at 34 percent in June of 1994, and at 33 percent in May of 2006, the year that Democrats won back control of the House and the Senate from the GOP.

The anti-incumbent sentiment hurts Democrats more than Republicans, since there are more Democratic than Republican lawmakers fighting for re-election this year. But the survey does have a silver lining for the Democrats: They have a double-digit advantage over the GOP as the party that people trust to deal with the country's major problems. And six in ten people questioned say they have a negative view of the polices pushed by Congressional Republicans.

The ABC News/Washington Post poll was conducted June 3-6, with 1,005 national adults questioned by telephone. The survey's overall sampling error is plus or minus three percentage points.