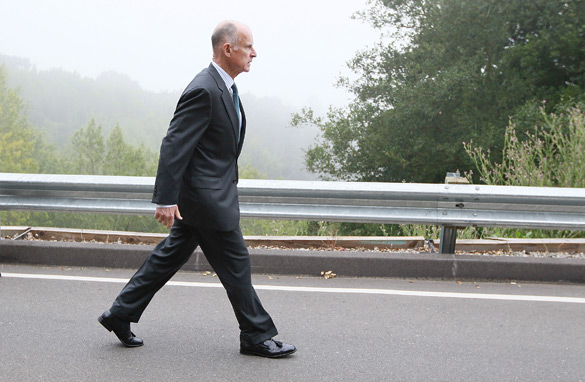 California gubernatorial candidate Jerry Brown alleged his opponent, Meg Whitman, of disseminating propaganda about him in the same way the Nazis did. (PHOTO CREDIT: Getty Images)

(CNN) - Given California's colorful political history, perhaps it's no surprise the just-kicked off gubernatorial race has taken a peculiar turn, with one candidate accusing the other of using Nazi-like tactics.

During an apparent off-the-cuff interview with a KCBS reporter published Wednesday, state Attorney Gen. Jerry Brown, the Democratic candidate, alleged opponent Meg Whitman of disseminating propaganda about him in the same way the Nazis did.

"It's like Goebbels...Goebbels invented this kind of propaganda," said Brown in reference to Joseph Goebbels, the Nazi Minister of Propaganda. "He took control of the whole world. She wants to be president. That's her ambition, the first woman president. That's what this is all about."

The comments were made while Brown was jogging and his campaign dismissed the remarks as mere "jogging talk."

END_OF_DOCUMENT_TOKEN_TO_BE_REPLACED

[cnn-photo-caption image= http://i2.cdn.turner.com/cnn/2010/images/04/19/art.getty.mitt.romney.jpg caption ="According to an Iowa Poll released Friday, 62 percent of people who said they were likely to vote in the state's Tuesday GOP primary give Mitt Romney a favorable rating."](CNN) - At this very early stage in the battle for the 2012 Republican presidential nomination, strong name recognition appears to be making the difference. Case in point: a new survey of Iowa Republicans that puts possible White House hopefuls Mitt Romney, Sarah Palin and Newt Gingrich at the top.

According to an Iowa Poll released Friday, 62 percent of people who said they were likely to vote in the state's Tuesday GOP primary give Romney a favorable rating, with 26 holding a unfavorable view. Fifty-eight percent say they have a positive view of Palin, with nearly four in ten saying they hold a negative view. Fifty-six percent say they have favorable opinion of Gingrich, with one in three saying they hold an unfavorable view.

Romney, the former Massachusetts governor who was a 2008 Republican presidential candidate, Palin, the former Alaska governor and John McCain's running mate two years ago, and Gingrich, the former speaker of the House, all have high name ID.

But the poll indicates that a large percentage of Iowa Republicans are not familiar with some of the other possible contenders for the 2012 GOP presidential nomination. Fifty-three percent of those questioned say they don't know enough about Tim Pawlenty to form a favorable or unfavorable opinion, even though he's governor of neighboring Minnesota, with 32 percent saying they have a favorable view of him. Sen. John Thune is unknown to 71 percent of Iowa Republicans, even though he's from neighboring South Dakota, and eight in ten were unfamiliar with Indiana Gov. Mitch Daniels.

END_OF_DOCUMENT_TOKEN_TO_BE_REPLACED

[cnn-photo-caption image= http://i2.cdn.turner.com/cnn/2010/images/06/11/art.jindal4pres.cnn.jpg caption ="A ‘Jindal for President’ on Louisiana’s coast."](CNN) - He's said he has no plans to run for president in 2012, but Lousiana Gov. Bobby Jindal's handling of the oil crisis off the Gulf Coast may have earned him a number of new supporters who hope he reconsiders.

On the Louisiana coast this week, CNN's John King even passed by a homemade "Jindal for President" sign – something that made the Louisiana Republican chuckle.

"I've got my hands full down here, we've got to protect our state; we've got plenty of work to do in Louisiana," Jindal told King Thursday.

The 39 year-old governor of Indian descent has long been considered a rising star in the Republican Party, though his star power took a bit of hit last year following a poorly received response to President Obama's State of the Union Address.

Speaking at the Southern Republican Leadership Conference in April, Jindal – who faces reelection next year - said he will not be a candidate for president in 2012.

"I am not running for president of the United States," he said then. "I've got the job I want."

Among the proposals highlighted by the administration is a $30 billion government lending program offering capital to community banks that boost their small-business lending. Banks with assets worth less than $10 billion would be able to borrow money from the Treasury at a dividend rate as low as 1 percent provided they use the cash to make more small-business loans this year than they did in 2009.

Other proposals being pushed by the president include an elimination of capital gains taxes on certain small business investments.

"Ensuring that small businesses can thrive is about more than our economic success," Obama said at the White House after a meeting with small business leaders. "It's about who we are as a people. It's about a nation where anybody with a good idea and a willingness to work can succeed. That's the promise of America."

END_OF_DOCUMENT_TOKEN_TO_BE_REPLACED

Rove says Barrett is a long shot in S.C.

Haley captured 49 percent of the vote in Tuesday's GOP primary, while Barrett finished a distant second. The runoff election is June 22 and some Republicans have suggested that Barrett step aside and let Haley become the nominee.

Asked in a Fox News appearance if Barrett should drop out of the runoff, Rove answered, "Well, he's a really good man and this is a decision that's up to him."

Rove predicted that Republican voters "who supported other candidates are now going to find themselves, you know, sort of moving naturally into the campaign of the candidate who got nearly as many votes as all the rest of the candidates combined."

[cnn-photo-caption image= http://i2.cdn.turner.com/cnn/2010/images/06/11/art.blincoln.0611.gi.jpg caption ="Arkansas Sen. Blanche Lincoln was once a stranger to the national press corps."]Washington (CNN) - One day late last year, Blanche Lincoln held a news conference in the Senate. That sure doesn't sound like much of a headline, but at the time it was.

For much of 2009's heated health care debate, she avoided reporters like the plague.

She was such a stranger to the Capitol Hill press corps that when she walked into her news conference, she commented on what she thought was a new backdrop for the press studio frequented by senators. It had actually been renovated more than a year earlier.

Lincoln barely acknowledged Washington reporters - this one assumed she was being strategic and limiting her interaction - especially about the divisive health care debate.

"Now you've got to play 'Where's Sharron [Angle]?' because she's hiding out, according to the local news. I might hide out, too, if I said I wanted to get rid of Social Security and Medicare," Clinton told an audience of 700 people during a 30-minute speech in Las Vegas, according to the Las Vegas-Review Journal.

Clinton also took aim at Angle for support of a plan that would have Yucca Mountain accept nuclear waste. Reid, as have most Nevada lawmakers, opposes opening Yucca to nuclear waste.

Since her victory in Tuesday's GOP Senate primary, Angle - a former state assemblywoman who was backed by Tea Party organizations - has largely avoided the spotlight, only granting interviews to conservative talk-radio hosts. Her campaign website has also gone dark except for a page that seeks contributions.

Commenting to the Las Vegas Review-Journal, Angle campaign spokesman Jerry Stacy said they have been "overwhelmed."

END_OF_DOCUMENT_TOKEN_TO_BE_REPLACED

Think you're smart about deficits? Try this.

Rep. Joe Sestak, D-Pennsylvania, is one of the candidates that the White House unsuccessfully tried to convince to drop a primary challenge to Sen. Arlen Specter, D-Pennsylvania. A role in the administration was suggested as a way to entice Sestak to forgo a challenge to Specter, the Republican turned Democrat who President Obama backed in the primary. Sestak rebuffed the attempt and went on to defeat Specter in last month's election.

Issa, who serves as the senior Republican on the House Oversight and Government Reform Committee, has called for an independent counsel to investigate the matter.

"After pledging to change the business-as-usual culture of Washington during his campaign, the Sestak-Romanoff controversies have lifted a veil on this Presidency that has revealed a Chicago-style politicking that is the antithesis of what candidate-Obama campaigned on," Issa, who represents a southern California district, charged in a statement sent to CNN.

The meeting is being held in Hershey, Pennsylvania. No word yet if Issa will also be addressing Colorado Republicans.