[cnn-photo-caption image= http://i2.cdn.turner.com/cnn/2010/images/06/13/art.carlycu0613.gi.jpg caption="'I regret this whole situation. I gave people the opportunity to talk about something petty and superficial,' Republican Senate candidate Carly Fiorina said Sunday."]
(CNN) – Republican Senate hopeful Carly Fiorina expressed regret Sunday for a recent, unguarded comment about her rival's hair style that was caught on a live microphone as she prepped for a television interview last week.

"God, what is that hair?" Fiorina said of Sen. Barbara Boxer, D-California. "So yesterday."

Appearing on "Fox News Sunday," Fiorina tried to move past the embarrassing moment.

"Well, I was quoting a friend of mine," Fiorina said, according to a transcript. "But look, I regret this whole situation. I gave people the opportunity to talk about something petty and superficial. And this is a very serious election year about serious issues."

But Fiorina did not directly respond Sunday when asked whether she'd called Boxer to apologize.

END_OF_DOCUMENT_TOKEN_TO_BE_REPLACED

Washington (CNN) - The decision for President Barack Obama to make a major address to the nation on the Gulf oil spill came together Friday and Saturday, according to senior administration officials.

Just days before, the White House had indicated no such address was in the works for the very near future.

A top White House aide said "after spending two days in region it's a good time to tell folks what has been done and what needs to happen."
END_OF_DOCUMENT_TOKEN_TO_BE_REPLACED

State of the Union: Candy Crowley's Crib Sheet for June 13

The White House, in the person of David Axelrod, would like you to know that the president will address the nation Tuesday evening about the oil spill.  That’s right after his third trip to the Gulf in 18 days, and right before his (Wednesday) first meeting ever with BP executives where he intends to tell BP it needs to ante up into an escrow account, to be controlled by an independent panel to pay people and businesses economically hurt by the oil gusher. Reassuringly (we think), Axelrod says he’s not going to make any judgments about the soul of BP execs.

Message:  Not Working For Them

Rep. Mike Pence (R-IN) can’t figure out why it took the president 7 weeks to talk to BP’s CEO because everybody else knew from Day Two whose “A-double-S” should be kicked.

Oil is washing up on Alabama’s shore and that’s not good for business, any business. Governor Bob Riley says BP ought to reimburse everyone for everything, from lost ice-cream sales on the beach to falling tax receipts to the state. This could get expensive.

Riley is no more pleased with the Obama administration than he is with BP. As it turns out, the government bureaucracy is, well, bureaucratic. Venting his frustration, the governor complained there are 14 agencies with veto power. So many people things aren’t getting done.
e.g.: Beach cleaners are sent to the scene, but OSHA holds their schedule to 20 minutes an hour in the oppressive heat. He’d like to see the 14 people making decisions be reduced to precisely …one.

Other Stuff On Sunday TV

Rep. James Clyburn talked elephant dung and the surprise win of an unemployed veteran with no money and no campaign to be the democratic nominee for a South Carolina senate seat.

You gotta love a Sunday when Elvis, elephant dung and “A-double-S” come up in the conversations.
END_OF_DOCUMENT_TOKEN_TO_BE_REPLACED

[cnn-photo-caption image= http://i2.cdn.turner.com/cnn/2010/images/06/13/art.penceiso0613.cnn.jpg caption="'I believe with all my heart that Republicans need to continue to fight for the sanctity of life and the sanctity of marriage with everything we’ve got in 2010 and in 2012,' Rep. Pence said Sunday."]
(CNN) – A leading congressional conservative disagreed Sunday with a suggestion by his state's governor that social issues be put on the back burner in order to allow policymakers to focus on turning the economy around and bringing the federal government’s finances into balance.

Speaking to The Weekly Standard, a conservative publication, Indiana's Republican governor, Mitch Daniels, said the next president "would have to call a truce on the so-called social issues" so he or she could focus on the fiscal problems facing the country.

Asked about the comments, GOP Rep. Mike Pence of Indiana praised Daniels but rejected his contention about social issues as the midterm elections approach and as both parties begin to turn their attention to the 2012 presidential race.

“I think Mitch Daniels is the best governor in the United States of America. He’s done a fantastic job for the people of Indiana,” Pence said on CNN’s State of the Union.

But, Pence quickly added that, in his view, “Barack Obama’s the most pro-abortion president in American history.”

“I believe with all my heart,” Pence told CNN Chief Political Correspondent Candy Crowley, “that Republicans need to continue to fight for the sanctity of life and the sanctity of marriage with everything we’ve got in 2010 and in 2012.”
END_OF_DOCUMENT_TOKEN_TO_BE_REPLACED

Obama's push for spending to boost economy gets mixed reaction

The Saturday letter to the leaders of the House and Senate asked for the Senate to approve an $80 billion measure offering extended jobless benefits as well as tax breaks and better access to credit for small businesses. In the letter, Obama also sought congressional support for proposals totaling about $50 billion to help state and local governments avoid layoffs and service reductions.

Obama's letter also noted that his administration was holding down some annual spending and had created a bipartisan commission intended to devise a deficit reduction strategy.

"Ultimately, reining in our deficit will take major steps, including the effective implementation of health reform and laying the conditions for the success of the bipartisan fiscal commission," Obama's letter said. "Only through this approach of aggressive and well-designed targeted and temporary actions, alongside measures to ensure a sustainable and responsible long-term budget outlook, will we be able to fulfill our economic potential."

[cnn-photo-caption image= http://i2.cdn.turner.com/cnn/2010/images/06/13/art.bolawalk0613.gi.jpg caption="During his last visit to the Gulf Coast region, the president met with business people and local officials in Grand Isle, Louisiana. The president will address the nation Tuesday after another trip to the Gulf states early this week."]
Washington (CNN) - President Barack Obama will visit the Gulf states affected by the oil spill on Monday and Tuesday and then address the nation on Tuesday night from the White House on the next steps in responding to the environmental catastrophe, his senior adviser said Sunday.

On his fourth visit to the Gulf region since the disaster began on April 20, Obama will make stops in Theodore, Alabama; Gulfport, Mississippi, and Pensacola, Florida, according to senior administration officials.

After returning from the two-day trip, Obama will make a televised statement from the Oval Office on the night before he is scheduled to meet with top BP officials.

David Axelrod, the senior adviser to Obama, said the president would push BP to create a BP-funded escrow account that will pay for damage claims from the worsening oil spill. In addition, Axelrod said, the plan would call for an independent third party to handle the claims process.

"The president will use every legal device at his disposal to make sure that this money is escrowed and that there is an independent administrator so that claims are not slow-walked, people can get the relief they need in a timely fashion and that we don't create more victims from this terrible disaster," Axelrod told reporters.

Asked if Obama had legal authority to force BP to create the escrow fund, Axelrod said: "The advice is that we have the authority to compel such an escrow fund if it comes to that."

Washington (CNN) - U.S. and Cuban officials are set to sit down together in Washington on Friday to discuss immigration and other issues, according to a State Department spokesman.

"The U.S. views the migration talks as an important opportunity for both the United States and Cuban governments to discuss policies and procedures that promote safe, legal, and orderly migration," State Department spokesman Michael Tran told CNN Sunday.
END_OF_DOCUMENT_TOKEN_TO_BE_REPLACED

State of the Union: Up close on Obama's response to the oil spill 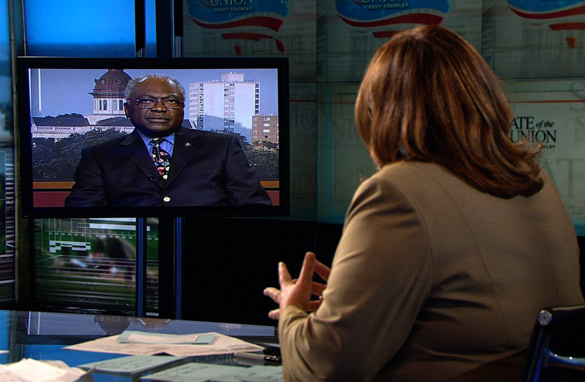 (CNN) – A leading South Carolina Democrat charged Sunday that his state’s recent Democratic primaries had been tainted. And House Majority Whip James Clyburn used some very colorful language to do so.

In addition to the fact that Alvin Greene, an unemployed veteran with no apparent campaign apparatus, won Tuesday’s race for the South Carolina’s Democratic Senate nomination, Clyburn also told CNN of a suspicious element in his own primary race - a consultant with Republican ties worked for Clyburn’s unsuccessful challenger.

“I saw the patterns in this,” Clyburn said on CNN’s State of the Union. “I know a Democratic pattern. I know a Republican pattern and I saw in the Democratic primary elephant dung all over the place. And so I knew something was wrong in that primary. And this result tells us that.”

Clyburn also told CNN Chief Political Correspondent Candy Crowley that he did not see himself supporting Greene in his effort to unseat popular conservative lawmaker Sen. Jim DeMint, R-South Carolina. And Clyburn reiterated his theory that Greene’s candidacy was orchestrated to disrupt the electoral process in South Carolina. “Of course, Candy, I never said [Greene] was a Republican plant,” explained Clyburn. “I said he was someone’s plant.”

Related: Clyburn calls for an investigation into Greene's bid

Speaking to CNN’s Don Lemon in an interview that aired Saturday night, Greene denied that he had been planted in the race by the Republican Party.

(Video of Lemon's interview with Greene embedded after the jump)