[cnn-photo-caption image= http://i2.cdn.turner.com/cnn/2010/images/06/15/art.bopensive0615.gi.jpg caption="President Obama will note the unprecedented federal response to the oil disaster and cite BP's responsibility to clean up the worst environmental catastrophe in U.S. history and pay all damages, administration officials said."]
Washington (CNN) - President Barack Obama will detail plans for dealing with the worst oil spill in U.S. history and call for shifting to a clean energy economy when he makes his first Oval Office address to the nation on Tuesday night.

The 18-minute speech being televised nationally will describe what happened in the April 20th explosion and fire on a Gulf of Mexico oil rig that led to the gushing well at the ocean's bottom, according to two senior
administration officials who briefed reporters on condition of not being identified by name.

Obama will emphasize the government's containment strategy in conjunction with oil giant BP, which owns the broken well, to capture as much as 90 percent of the leaking oil in coming weeks as workers dig relief wells intended to halt the spill sometime in August, the senior administration officials said.

In addition, Obama will note the unprecedented federal response to the oil disaster and cite BP's responsibility to clean up the worst environmental catastrophe in U.S. history and pay all damages, the officials said.

However, the officials conceded that negotiations with BP on a BP-funded escrow account to pay for damages are continuing. They said a main sticking point was whether workers who lose their jobs due to the government's six-month moratorium on offshore drilling would be eligible to file damage claims.

After Obama speech, Gibbs to answer public's questions on spill

Washington (CNN) – Moments after President Obama addresses the nation about the oil spill Tuesday in a primetime address, White House Press Secretary Robert Gibbs will field questions about the situation that were submitted online by the public.

The White House will have final say on what questions are presented, but White House spokesman Nick Shapiro noted that Gibbs will answer the most popular in each category.

In a short video posted on the White House's YouTube channel, Gibbs invites the public to submit questions through an online platform called Google Moderator. The Google tool allows users to submit questions in several categories including "BP Accountability," "Cleanup Plan," "Gulf Region recovery," "Environmental impact," and "Other" as well as express approval or disapproval through "thumbs up" and "thumbs down" icons for each question.

Earlier this year, after his first State of the Union address, Obama personally took questions submitted by YouTube users during an interview distributed on the popular online video site.

[cnn-photo-caption image= http://i2.cdn.turner.com/cnn/2010/images/06/15/art.kagan.0510h.gi.jpg caption ="A coalition of 69 law-school deans have endorsed Supreme court nominee Elena Kagan."]
Washington (CNN) - A broad coalition of law-school leaders have come out in strong support of Elena's Kagan's nomination to the Supreme Court. But three top academics - speaking in a White House-organized briefing - refused to talk about or defend her past views on a range of hot-button issues such as affirmative action and gun rights.

A letter from 69 deans was the latest endorsement from the legal and political community on behalf of the 50-year-old solicitor general. They touted her skills as an administrator, intellectual, and consensus builder when she was dean of the Harvard Law School from 2003-2009.

In that role, "She revealed a strong and consistent aptitude for forging coalitions that achieved smart and sensible solutions, often in the face of seemingly insoluble conflict," wrote the deans. "The same qualities that enabled her to unify what some described as a fractious campus will serve the nation, and the Constitution, well."

The letter was sent to the Senate Judiciary Committee, which start confirmation hearings for Kagan on June 28. Republicans on the committee have complained they have not had enough time to examine tens of thousands of documents from her service in the Clinton White House. Those records began being released in the past 10 days, and reveal the then-young lawyer as a politically shrewd policy pragmatist.

END_OF_DOCUMENT_TOKEN_TO_BE_REPLACED 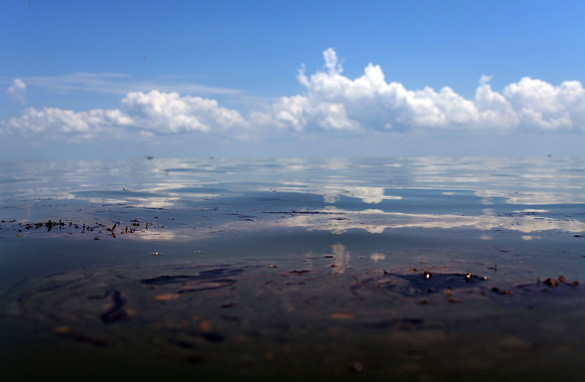 (CNN) - Government officials Tuesday increased the estimate of oil flowing into the Gulf to between 35,000 and 60,000 barrels (1.5 million to 2.5 million) per day, up to 50 percent more than previously estimated.

The government's previous estimate, issued last week, was 20,000 to 40,000 barrels per day. The change was "based on updated information and scientific assessments," and was reached by Secretary of Energy Steven Chu, Secretary of the Interior Ken Salazar, and Chair of the National Incident Command's Flow Rate Technical Group Marcia McNutt, the Deepwater Horizon Incident Joint Information Center said.

"The improved estimate is based on more and better data that is now available and that helps increase the scientific confidence in the accuracy of the estimate," it said.

A White House statement said Bromwich would "lead the effort to reform the Minerals Management Service," an Interior Department agency accused of corrupt practices and poor oversight of offshore drilling in the run-up to the Gulf oil disaster.

"For a decade or more, the cozy relationship between the oil companies and the federal agency was allowed to go unchecked," Obama said in a White House statement. "That allowed drilling permits to be issued in exchange not for safety plans, but assurances of safety from oil companies. That cannot and will not happen anymore."

According to the statement, Bromwich will develop plans "for a new oversight structure, replacing long-standing, inadequate practices with a gold-standard approach for environmental and safety regulation."

"He has a mandate to implement far-reaching change and will have the resources to accomplish that change," the statement said.
END_OF_DOCUMENT_TOKEN_TO_BE_REPLACED

Washington (CNN) - The woman hoping to unseat the most powerful member of the Senate paid a visit to the Capitol on Tuesday to meet the people whom she hopes to call colleagues.

Sharron Angle was officially introduced to the Senate Republican conference at their weekly luncheon, where the Nevada GOP senatorial nominee met with individuals and briefly spoke to the group about her campaign to beat Senate Majority Leader Harry Reid.

While it is customary for senatorial candidates to come to Washington and meet with sitting senators, Angle's victory in the Nevada primary one week ago raised concern among some Republican party officials who deem her support for phasing out social security and dismantling the Department of Education as out of the mainstream.

Angle's invitation to the Capitol came from Nevada's other Senator, John Ensign, who said her presentation was "very positive" and that her positions are in line with those of fellow Nevadans.
END_OF_DOCUMENT_TOKEN_TO_BE_REPLACED

[cnn-photo-caption image= http://i2.cdn.turner.com/cnn/2010/images/06/15/art.obama.oilresponse.jpg caption ="President Obama, Gov. Charlie Crist, and Adm. Thad Allen at a briefing with local officials in Pensacola, Florida Tuesday. A new poll indicates nearly half of the public disapproves of how Obama's handling the oil spill."]
Washington (CNN) - Nearly half of all Americans disapprove of the way President Barack Obama is handling the oil spill in the Gulf of Mexico, according to a new national poll released hours before the president gives a prime-time address from the Oval Office on the crisis.

An AP-GfK survey released Tuesday indicates that 48-percent of the public disapproves of how Obama's handling the oil spill, up 15 percentage points from a month ago. Thirty-nine percent approve of how the president's dealing with the crisis, down three points from May. According to the survey, 13- percent say they neither approve nor disapprove.

Other recent polls also indicate that a minority of Americans approve of the way Obama and his administration are handling the massive spill.

The president's overall job approval stands at 50-percent in the new AP-GfK survey, up one point from a month ago.

END_OF_DOCUMENT_TOKEN_TO_BE_REPLACED

At one point Rep. Cliff Stearns, R-Fla., called on Lamar McKay, chairman and president of BP America, to quit his job. Rep. Anh "Joseph" Cao, R-Louisiana went so far as to suggest McKay try a type of ritual suicide.

"Mr. Stearns asked you to resign. In the Asian culture we do things differently. During the Samurai days we just give you a knife and ask you to commit hara-kiri," said Cao, who is of Vietnamese descent.

McKay did not respond to these comments. However, he did say that a relief well will allow his company to get the leak under control "by mid-August."

Rep. Ed Markey, D-Mass. called on executives from BP, ExxonMobil, ConocoPhillips, Chevron and Shell Oil to answer before his House Energy and Environment subcommittee Tuesday. Specifically, he wanted to focus on the ongoing spill, renewable energy development and the effect of President Obama's six-month moratorium on deepwater drilling.

Palin hopes to meet Thatcher during possible trip to U.K.

[cnn-photo-caption image= http://i2.cdn.turner.com/cnn/2010/images/06/15/art.palin.0808t.gi.jpg caption ="Sarah Palin said she hopes to meet one of her 'political heroines', former British Prime Minister Margaret Thatcher, when she visits London."]
(CNN) - Sarah Palin may be going global in her effort to connect with prominent conservatives. The former Republican vice presidential nominee said she has received an invitation to visit London and included in that was an offer to meet former British Prime Minister Margaret Thatcher, she wrote on her Facebook page.

In the Monday posting, she described Thatcher as "one of my political heroines."

"Baroness Thatcher's life and career serve as a blueprint for overcoming the odds and challenging the 'status quo.' She started life as a grocer's daughter from Grantham and rose to become Prime Minister – all by her own merit and hard work. I cherish her example and will always count her as one of my role models. Her friendship with my other political hero, Ronald Reagan, exemplified the Special Relationship between the United States and the United Kingdom," she wrote.

Palin, who did not detail who has extended the invitation to visit, said she hopes to arrange the trip "in the future."

A spokeswoman for Thatcher told CNN her office has not been contacted recently about a possible meeting although the two women's staffs did speak last year. Asked if the former prime minister would want to meet Palin, the spokesman said "she would be very happy...if it is feasible." The spokeswoman said the possible meeting seems to have generated a lot of interest in the U.S.

In Dem vs. Dem race, Meek slams Greene as a 'carpetbagger'

Washington (CNN) - The bitter Democrat-versus-Democrat race to become Florida's next senator on Tuesday saw a new salvo, with one candidate slamming his opponent as a "carpetbagger" who is trying "to buy Florida's senate seat."

Rep. Kendrick Meek's campaign has also said that Jeff Greene has lived in Florida for such a short time that he would be ineligible to run for other key statewide offices.

Meek's campaign made the charges in a campaign statement released Tuesday. Meek and Greene are locked in a battle for the Democratic senate nomination that will be decided in a late August primary.

The winner will vie for Florida's senate seat in a three-way race against Gov. Charlie Crist, who abandoned the Republican Party for an independent bid, and Republican Marco Rubio, the former Florida House Speaker.

The statement from Meeks' campaign references a website that, it says, "Confirms that Greene didn't live here long enough to run for any statewide office."

"…Jeff Greene decided to run for political office in Florida after only living here for two years," the statement says, adding that Greene "asks middle class Floridians to trust him, but why would they?"