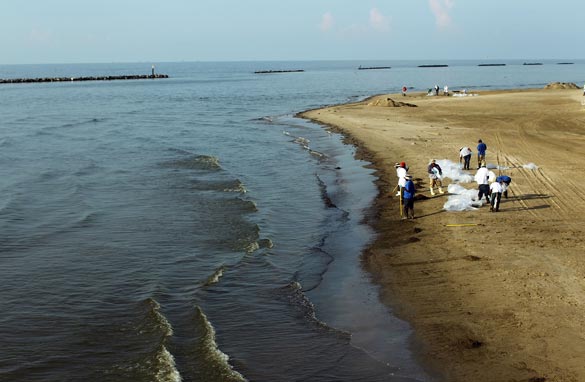 The poll's Thursday release comes as top BP executives testify in front of Congress. At the hearing, Rep. Joe Barton, ranking Republican on the House Energy Committee, defended BP and slammed the White House for insisting that BP place $20 billion in an escrow fund to help compensate those affected by the oil disaster.

"I am ashamed of what happened at the White House yesterday," said Barton at the hearing. "I think it is a tragedy of the first proportion that a private corporation would be subjected to what I would characterize as a shakedown. In this case a $20 billion dollar shakedown."

But according to the poll, Americans disagree with Barton. Eighty-two percent approve of the creating of a fund of billions of dollars to compensate workers and businesses affected by the spill.

The survey indicates that two thirds of Americans think the president hasn't been tough enough in dealing with BP, with one in four saying Obama's been about right and five percent saying he's been too tough on the oil corporation.

Only 13 percent of Americans approve of how BP's handling the oil spill, down 11 points from last month, with 87 percent saying they disapprove, up an equal amount from May.

Just over half questioned say they trust the federal government more than BP to improve the situation in the Gulf of Mexico, with 32 percent saying they have more faith in BP and 12 percent say they trust neither Washington or the oil corporation.

"Most Republicans say they trust BP more than the government, but only about one in four independents and Democrats agree with that view," Holland says. "That's not to say that Republicans like BP - only 13% of GOP respondents approve of how the oil company is handling the situation in the Gulf and six in ten Republicans think that BP will be more concerned about the bottom line than about cleaning up the Gulf."

The CNN/Opinion Research Corporation poll was conducted Wednesday June 16, with 534 adult Americans questioned by telephone. The survey's overall sampling error is plus or minus 4.5 percentage points.