Members of Congress battle the media on softball diamond 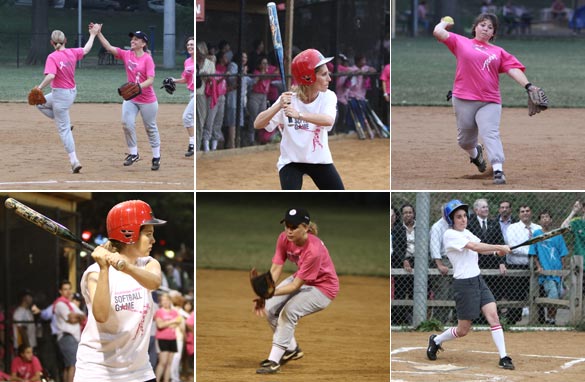 Female members of Congress and members of the media oiled up their gloves and laced up their spikes to do battle in the second annual Congressional women's softball game Wednesday evening in Washington. (PHOTO CREDITS: Bob Kovach/CNN)

(CNN) - The Washington Nationals may have been on the road Tuesday night but baseball fans were able to get their fix by two teams who were in a league of their own.

On this humid June evening, members of Congress and members of the media oiled up their gloves and laced up their spikes to do battle in the second annual Congressional women's softball game.

Check out more pictures and find out who was victorious, after the jump:
END_OF_DOCUMENT_TOKEN_TO_BE_REPLACED

Sanford won't have to go far to join the Republican frontrunner – Haley is scheduled to appear with Mitt and Ann Romney in Charleston and Beaufort, both a short drive from Sanford's home on Sullivan's Island.

Sanford gave Haley's campaign its first major endorsement last fall, when Haley, a state representative, was the least known of the four candidates seeking the Republican gubernatorial nomination. Now she is on the cusp of winning the nomination, assuming she maintains her current wide lead in the runoff against Rep. Gresham Barrett.

Haley is regarded as Gov. Mark Sanford's ideological protégé in the governor's race. But the governor, aware of his tarnished reputation in the wake of an affair the destroyed his career and marriage, has avoided endorsing Haley.

The revised jobs bill eliminates a $25 weekly supplement for the jobless that had been part of the last year's stimulus act. Those currently receiving the supplement in their unemployment benefits check will continue to do so until they exhaust their extended benefits, or until the week of Dec. 7, whichever comes first. That cut will reduce the bill's cost by $5.8 billion over the next decade.

The new version of the bill would also freeze a 21% cut to Medicare physician reimbursement rates only through November, instead of through 2011. This will reduce the bill's size by $16.4 billion over 10 years.

The legislation, which has been stuck in the Senate for more than a week, originally came in at about $140 billion and would have added about $78.7 billion to the deficit. The overall impact of the revised bill on the deficit has not yet been determined.

CNN: Democrat: Lawmakers going to take Hayward's 'hide off'
Democratic lawmakers will try to build the case of a corporate culture which chose riskier, cheaper methods over safety concerns as they grill BP CEO Tony Hayward on Capitol Hill Thursday. "Members are angry. Members are frustrated," Rep. Bart Stupak, D-Michigan, told CNN's Dana Bash. "They're going to take his hide off, as they should." Stupak, who chairs the House Energy and Commerce Subcommittee on Oversight and Investigations, outlined evidence his committee has put together from thousands of pages of internal BP documents. In Thursday's hearing, Stupak intends to focus on what the lawmaker sees as a pattern of behavior on BP's part that risked safety in order to contain costs and make up for the drilling project's being behind schedule.

CNN: RNC alleges Obama ‘dithered’ in Gulf crisis
The Republican National Committee accuses President Obama of failing to focus his full attention on the Gulf oil spill, specifically criticizing him in a new web video of waiting 58 days to meet with BP executives to discuss how to address this environmental disaster. Obama met with BP officials Wednesday morning in the Roosevelt Room, less than 24 hours after he returned from the Gulf and delivered a primetime address from the Oval office outlining his plan to revive the region.

CNN: Poll: Rossi front-runner in Washington GOP Senate race
Dino Rossi holds a large lead over two other Republican candidates in the battle to challenge Democratic Sen. Patty Murray of Washington, according to a new survey. An Elway Poll of registered voters in Washington state indicates that 43 percent back Murray, who's bidding for a fourth term in the Senate, in the state's August 17 primary. Thirty-one percent support Rossi, with fellow Republicans Clint Didier at five percent and Paul Akers at two percent.

Charleston Post and Courier: Rawl will cite irregularities
Vic Rawl, the defeated candidate in the Democratic race for the U.S. Senate, will allege irregularities in voting-machine programming when he protests the primary results today in Columbia. It's questionable whether Alvin Greene, the certified winner, will show up to defend his victory even after being invited in a hand-delivered letter from party officials. Efforts to reach Greene were unsuccessful Wednesday, but during a telephone interview Tuesday he said "I'm not going." He immediately hung up.