A general's life: From clandestine missions to controversy 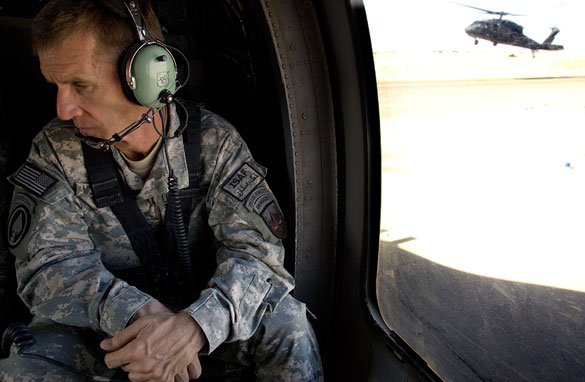 Stanley McChrystal has been recalled to Washington following the release of a controversial Rolling Stone profile. (PHOTO CREDIT: Getty Images)

(CNN) - Shortly after President Obama tapped Stanley McChrystal in June 2009 to be the top commander in Afghanistan, CNN reported that McChrystal would never let a reporter in the room during classified morning meetings he led among senior military officers.

McChrystal was known in Washington for his discretion. He kept a low profile, briefly interrupted by two major news events.

The general was criticized for the way he handled the circumstances of U.S. soldier Pat Tillman's friendly fire death in Afghanistan in 2004. In 2006, McChrystal was lauded for the death of Abu Musab al-Zarqawi, the leader of al Qaeda in Iraq.

The media spotlight on McChrystal this week, however, may be the hottest in the general's storied military career.

On Tuesday, McChrystal flew from Afghanistan to Washington. His boss, President Obama, has asked the general to explain in person the derisive comments he and his aides made to a Rolling Stone reporter.

The magazine's profile on McChrystal, due out Friday, depicts an angry, snarky and foulmouthed general lambasting how the war in Afghanistan is being conducted.

McChrystal does not directly criticize Obama in the article, but reporter Michael Hastings writes that the general and Obama "failed from the outset to connect" after the president took office.

Sources familiar with their first meeting said McChrystal thought Obama looked "uncomfortable and intimidated" by the room full of top military officials, according to the article.

"Are you asking about Vice President Biden?'" McChrystal says with a laugh.

McChrystal hasn't denied the article's accuracy. In a statement, he called his comments "a mistake" and apologized for "poor judgment." The general has also fired a press aide over the article, two Defense Department sources told CNN.

McChrystal, a West Point graduate and former Green Beret, was a senior official on the staff of Chairman of the Joint Chiefs of Staff Adm. Michael Mullen. Between 2003 and 2008, he was the commander of the highly clandestine Joint Special Operations Command, which oversees the military's most sensitive forces, including the Army's Delta Force.

In 2009, Defense Secretary Robert Gates asked for the resignation of Gen. David D. McKiernan, the former U.S. and NATO commander in Afghanistan. McChrystal would have "fresh eyes on the problem" in Afghanistan, Gates said at the time.

McChrystal has pushed a counterinsurgency strategy in Afghanistan intended to empower the civilian population so much that the insurgency will slowly be demoralized, fractured and defeated. Part of that plan means a prohibition in some areas on lethal air strikes and other attack methods so that civilian injuries and deaths can be avoided.

Some U.S. service members have been critical of the move, arguing that the rules have left them vulnerable.

In a July 2009 interview with Time, McChrystal explained his approach.

"First thing is, if you take a very small area, you have to try and figure out what is going on in that area. ... It's like knowing what is going on in your neighborhood," he said. "Not just the traffic on the road, but howmoney is made, who is running rule of law, who do they go to when they have dispute adjudication - do they go to a Taliban shadow court, a government of Afghanistan official entity?"

" ... You have to get at the attitudes of the people. And that is why I say you have to immerse yourself in it and understand it before you can confidently assess it," he told Time.

Just who the man is behind the strategy is tougher to assess.

"He's lanky, smart, tough, a sneaky stealth soldier," Maj. Gen. William Nash, a retired officer, told The New York Times in May 2009. "He's got all the Special Ops attributes, plus an intellect."

The Times reported that McChrystal thrives on a few hours of sleep a night and often eats only one meal a day. He has for years been an avid distance runner. When he did a yearlong fellowship at the Council on Foreign Relations in New York, he reportedly ran 12 miles a day from his home in Brooklyn to Manhattan.

McChrystal's last public apology came during his Senate confirmation hearing for the top post in Afghanistan. He said he was sorry for his role in the way the Pentagon handled Pat Tillman's death. Tillman gave up an NFL contract to join the Army and fight in Afghanistan.

He was killed by friendly fire in 2004. A Pentagon investigation found that McChrystal was notified that the soldier was a victim of fratricide. But Tillman's family said they were led to believe he was killed by insurgents.

Tillman's mother said last year that McChrystal knew at her son's memorial service that he had died of friendly fire, but did not tell the family. She said McChrystal was "lying."

Investigations by the Army's Criminal Investigation Division and the Defense Department's inspector general concluded that officers in Tillman's chain of command knew almost immediately that he had been killed by fire from his own platoon.

That information, however, was withheld from his family for more than a month, in violation of Army regulations. McChrystal told the Senate Armed Services Committee that he helped expedite the Silver Star award for Tillman before confirming that Tillman was killed by friendly fire.

The Army did not take action against McChrystal.