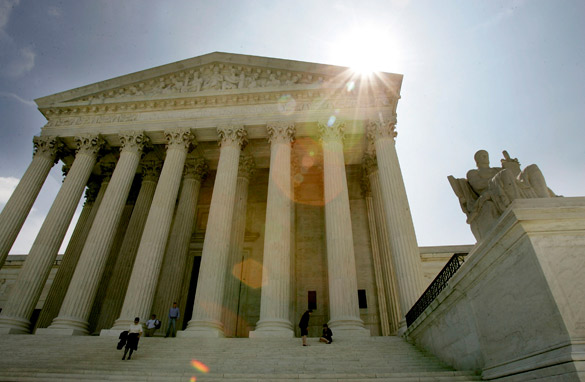 Washington (CNN) - In another dramatic victory for firearm owners, the Supreme Court has ruled unconstitutional Chicago, Illinois' 28-year-old strict ban on handgun ownership, a potentially far-reaching case over the ability of state and local governments to enforce limits on weapons.

A 5-4 conservative majority of justices on Monday reiterated its two-year-old conclusion the Constitution gives individuals equal or greater power than states on the issue of possession of certain firearms for
self-protection.

"It cannot be doubted that the right to bear arms was regarded as a substantive guarantee, not a prohibition that could be ignored so long as states legislated in an evenhanded manner," wrote Justice Samuel Alito.
END_OF_DOCUMENT_TOKEN_TO_BE_REPLACED

Brown, a little known Republican state lawmaker at the time, scored an upset in January's special election for the seat of the late Democratic Sen. Ted Kennedy. His victory gave the GOP 41 seats in the Senate, and dropped the Democrats to 59 seats, which meant Democrats lost the potential to avoid filibusters by marshaling 60 votes in the upper chamber.
END_OF_DOCUMENT_TOKEN_TO_BE_REPLACED

(CNN) - The South Carolina Law Enforcement Division is investigating how Alvin Greene, an unemployed political newcomer who could not afford a lawyer when facing criminal charges last year, came up with the $10,440 needed to get his name on the Democratic Senate primary ballot.

The State newspaper reported Monday that Greene is under investigation.

SLED traditionally does not have subpoena power, which would make it difficult to obtain Greene's bank records in the event that he refuses to turn them over.

But according to The State, the agency will take advantage of a new law, signed by Gov. Mark Sanford last week, that allows law enforcement officials to issue administrative subpoenas to financial institutions.

END_OF_DOCUMENT_TOKEN_TO_BE_REPLACED

[cnn-photo-caption image= http://i2.cdn.turner.com/cnn/2010/images/06/28/art.byrd.flag.gi.jpg caption="The flag flies at half staff at the Capitol building on Monday following the death of Sen. Robert Byrd. There is confusion about the process that will be used to fill his seat."]Washington (CNN) - The timing of Sen. Robert Byrd's death is contributing to confusion about filling the remainder of his term.

Under West Virginia law, Gov. Joe Manchin has the power to appoint a successor. Since Manchin, a popular two-term governor, is a Democrat, it's expected he will name a fellow member of his party to succeed Byrd, who was also a Democrat, thereby keeping Democrats' caucus in the Senate at 59 seats.

But questions surround how long Byrd's appointed successor would serve before another election is held.

END_OF_DOCUMENT_TOKEN_TO_BE_REPLACED

Washington (CNN) - Colleagues of Sen. Robert Byrd of West Virginia mourned his death as family and friends planned his funeral.

Byrd, the longest-serving member of the U.S. Congress, died Monday at the age of 92.

West Virginia Gov. Joe Manchin, a Democrat like Byrd, will appoint his replacement.

Read the reactions of Byrd's colleagues after the jump.

END_OF_DOCUMENT_TOKEN_TO_BE_REPLACED

Kagan hearings to begin with questions from left and right

[cnn-photo-caption image= http://i2.cdn.turner.com/cnn/2010/images/06/28/art.kagan2.gi.jpg caption="The Senate confirmation hearings for Elena Kagan begin Monday."]Washington (CNN) - The political irony for Supreme Court nominee Elena Kagan is who she is, what she hopes to be and the path necessary to fulfilling a long-held dream.

Confirmation hearings for the 50-year-old academic and government lawyer begin Monday. Although she has never been a judge, Kagan is seeking a lifetime job on the nation's highest court.

To get there, she herself must first be judged - by 17 senators on the Judiciary Committee, who will decide whether she deserves a final floor vote.

The hearings promise to be an intense examination of her record advocating for two Democratic White Houses and her work as a teacher and administrator at top law schools.

Byrd, a nine-term Democrat, was known as a master of the chamber's often-arcane rules and as the self-proclaimed "champion of the Constitution," a jealous guardian of congressional power.

His speeches were laced with references to poetry and the Greek and Roman classics, often punctuated by the brandishing of his pocket copy of the national charter.

He was also known as the "King of Pork," using top positions on the Senate Appropriations Committee to steer federal spending to his home state - one of the nation's poorest.