According to a Reuters/Ipsos survey, California Attorney General Jerry Brown holds a 45 to 39 percent advantage over Meg Whitman in the race for governor, with 14 percent undecided.

Brown, a former two-term governor in the 1970's and 1980's, has also served as Oakland mayor and California secretary of state. Whitman, the billionaire former eBay CEO who also was an adviser and surrogate for Sen. John McCain's 2008 presidential bid, has spent around $90 million of her own money so far on her bid for governor.

END_OF_DOCUMENT_TOKEN_TO_BE_REPLACED 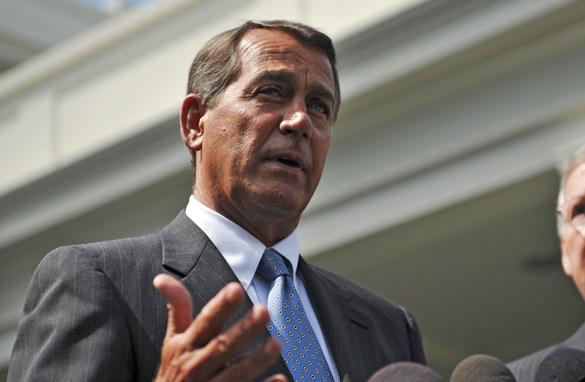 (CNN) – Democrats are apparently doing everything they can to ensure Rep. John Boehner's recent comments to a conservative-leaning paper in Pittsburgh aren't soon forgotten.

The Democratic National Committee is out with a web video Wednesday taking aim at the portion of the interview in which the House minority leader blasts the Obama-backed financial reform bill, saying of the measure, "This is killing an ant with a nuclear weapon."

The comments came in an interview with the Pittsburgh Tribune-Review, published Tuesday.

END_OF_DOCUMENT_TOKEN_TO_BE_REPLACED

[cnn-photo-caption image= http://i2.cdn.turner.com/cnn/2010/images/06/30/art.burr.ad.youtube.jpg caption="An actor meant to represent Sen. Richard Burr is scrubbed clean in a new ad paid for by a coalition of liberal groups."](CNN) – A coalition of liberal advocacy groups is launching an ad campaign Wednesday that praises two senators for supporting clean energy policies while slamming three others the groups say fall short.

The initial $2 million ad buy is funded by VoteVets.org, the League of Conservation Voters, the Sierra Club and union group SEIU.

Democratic Sens. Claire McCaskill of Missouri and Harry Reid of Nevada are the two beneficiaries of the campaign running statewide for the next two weeks on broadcast and cable.

Getting the negative treatment are Republican Sens. Richard Burr of North Carolina and Republican Mike Johanns as well as Democratic Sen. Ben Nelson of Nebraska.

END_OF_DOCUMENT_TOKEN_TO_BE_REPLACED

The poll indicates that 42 percent of Ohio voters back Fisher, with 40 percent supporting former Rep. and Bush administration budget director Rob Portman, the GOP nominee. Fisher's two point advantage is basically unchanged from Quinnipiac surveys conducted in March and April and is within the poll's sampling error.

"The Senate race remains far, far from any kind of clear picture, mostly because neither candidate is well known to Ohioans. Even though Fisher has been a figure in Ohio politics for two decades, 54 percent of voters say they don't know enough about him to form an opinion. For Portman, 66 percent can't rate him. With four months until Election Day the Senate race is wide, wide open," says Peter A. Brown, assistant director of the Quinnipiac University Polling Institute.

END_OF_DOCUMENT_TOKEN_TO_BE_REPLACED

(CNN) – Elizabeth Edwards, who became legally separated from husband John Edwards in January, is again speaking out about the woman who was instrumental in ending her marriage.

Speaking to CNN's Larry King in an exclusive primetime interview airing Wednesday, Edwards took aim at Rielle Hunter – the woman with whom John Edwards engaged in an affair and fathered a child – for posing provocatively in a magazine earlier this year.

"I did see the pictures and I think it's really important when you're a mother to convey that's the role you value and I think she just had too many T's to cross," Edwards said. "She also wanted to be viewed as sexy and everything else. At some point you can be sexy but that can't be your goal.

END_OF_DOCUMENT_TOKEN_TO_BE_REPLACED

Holder is in Afghanistan to foster the development of the nation's justice system, a statement from the department said.

"Fighting corruption and supporting the rule of law in Afghanistan are top priorities for this Administration, and we will continue to assist the Afghan government in creating and sustaining the effective criminal justice system to which the Afghan people are entitled," Holder said.

END_OF_DOCUMENT_TOKEN_TO_BE_REPLACED

CNN: Kagan takes on GOP critics at Supreme Court confirmation hearing
Supreme Court nominee Elena Kagan mounted a spirited defense against her Republican critics Tuesday, saying at her Senate Judiciary Committee confirmation hearing that she rejects the empathy standard for judges and believes the written law should be followed, including precedents in most cases. On the second day of the hearing expected to last through the week, Kagan expressed a judicial philosophy of impartiality and equality, saying the courts provide a "level playing field" for all and advocating for televising high court proceedings. Republican committee members had used their opening statements to depict Kagan as a deficient nominee because of her lack of judicial experience and the advocacy positions she has held in the Clinton and Obama administrations.

END_OF_DOCUMENT_TOKEN_TO_BE_REPLACED

Washington (CNN) - It has long been the dream of many a liberal advocate: to have an unabashedly outspoken, cleverly articulate justice who can take on the conservative majority and inspire young progressives for decades to come - a "Scalia for the Left," as many have called it.

If confirmed, Elena Kagan may or may not turn out to be that intellectual counterweight to conservatives Justice Antonin Scalia or Chief Justice John Roberts. But Kagan displayed in her confirmation hearing Tuesday what those two men share - a ready public wit and disarming sense of humor.

Time and again, the nominee sought to subtly charm lawmakers on the Senate Judiciary Committee, many of whom tried to press her for candor on a range of contentious issues such as gun rights, executive power and military recruiting on campus.

Kagan's funny asides during 10 hours of questioning appeared spontaneous, and colleagues say that is her style: someone who is serious about the law but who enjoys a good laugh, often at her expense.

END_OF_DOCUMENT_TOKEN_TO_BE_REPLACED

While the general is short of the time needed to retire at his current pay grade, White House spokesman Robert Gibbs said Obama would ensure he keeps his rank as he steps down.

"The president believes and has talked with Secretary Gates about this, and we will do whatever is necessary to ensure he, somebody who has served the country as he has, can retire at a four-star level," Gibbs told reporters.

McChrystal resigned as the top U.S. commander in Afghanistan last week after he and his staff were quoted in a Rolling Stone magazine article criticizing and mocking key administration officials, and he announced Monday that he would retire from the Army.

END_OF_DOCUMENT_TOKEN_TO_BE_REPLACED

Bill Clinton at odds with party over Colorado race

Washington (CNN) - Former President Bill Clinton announced Tuesday that he is endorsing challenger Andrew Romanoff in the battle for Colorado's Democratic Senate nomination, rather than support incumbent Sen. Michael Bennet. The move puts the former president at odds with his national party.

In an email to supporters, Clinton said that he supports Romanoff, "and I hope you will too. Please make a generous contribution to his campaign today."

In the email, the former president says he first met Romanoff in 1992. Clinton then goes on to describe what he calls the many accomplishments by Romanoff as a state lawmaker and then as Colorado's first Democratic House speaker since 1976.

"Colorado is far better off today because of Andrew Romanoff's leadership. America will be too," add Clinton.