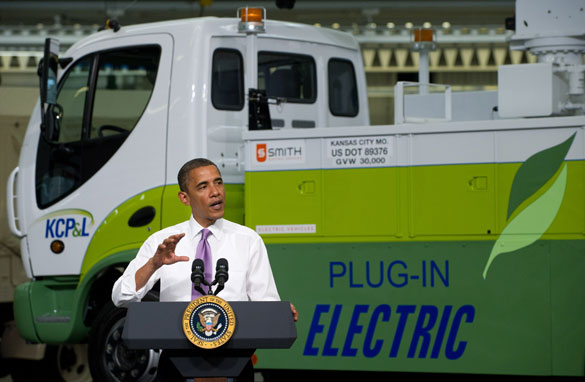 (CNN) - President Barack Obama said Thursday the U.S. economy is "headed in the right direction," and he challenged Republican critics to work with him to continue making progress instead of trying to obstruct his agenda.

"What is absolutely clear is that we are headed in the right direction - and that the surest way out of this storm is to keep moving forward," Obama told workers at a Kansas City, Missouri, electric vehicle company that had been helped by economic stimulus funds.

"There are some people who argue that we ought to abandon our efforts, and some people who made the political calculation that it's better to just say no to everything than lend a hand," Obama said of congressional Republicans who oppose his policies.

He urged his political opponents to visit Smith Electric Vehicles, which makes batteries for electric trucks, and other businesses across the country to hear how government initiatives such as the stimulus bill and tax credits are creating and saving jobs, particularly in future-growth industries such as clean energy.

"This is how we ensure that America not only recovers, but prospers - that this nation leads the industries of the future," Obama said.

Later, at a fundraiser for Democratic Senate candidate Robin Carnahan, Obama sharpened his criticism of Republicans, saying his GOP opponents continue to push the same economic policies that helped bring the recession that started during the previous administration.

"It's a little odd getting lectures on sobriety from folks who spent like drunken sailors for the last decade," Obama said. At a second event for Carnahan, Obama said Republicans are "peddling that same snake oil that they've been peddling for years."

Ridiculing Boehner for comparing the financial system collapse that helped launch the recession to an ant, Obama said: "You can imagine a movie: 'The Ant That Ate Our Economy.' That's a big ant."

Obama, however, said Republicans "continue to defend the status quo that got us into this mess."

Noting that some of his policies, such as the economic stimulus bill, were not widely popular, Obama prompted applause by saying: "Our decision was not to worry about the next election. We worried about the next generation."

Republicans criticize Obama for driving up the federal deficit, which they say hinders economic recovery and threatens future stability. Obama contends that government spending was essential to halting the recession and must continue in the short term until full recovery is assured.

At the same time, the president said, a deficit reduction commission he appointed will devise a long-term strategy for balancing the federal books.