Washington (CNN)– A Defense Department memo obtained by CNN Monday outlines "consensus recommendations" on how the U.S. military should interact with members of the media in relation to the war in Afghanistan.

Among other things, the memo includes a recommendation of weekly briefings for Pentagon press by military officials in the field. It also calls for "consistent media engagement by our most credible interlocutors."

It cites a "need to more effectively explain and sustain public understanding of [the Afghan] mission, goals, complexities and direct relevance to national security."

NAACP to condemn 'racism' of the Tea Parties

[cnn-photo-caption image= http://i2.cdn.turner.com/cnn/2010/images/07/12/art.teaparty.jpg caption ="The NAACP will offer its members a resolution condemning the Tea Party for what it calls rampant racism."]Washington (CNN) - On Tuesday the National Association for the Advancement of Colored People will offer a resolution to its members condemning what it believes to be rampant racism in the Tea Party movement.

The resolution could pass on Tuesday or later this week as the nation's oldest civil rights organization holds its 101st convention in Kansas City over six days.

NAACP President and CEO Benjamin Jealous talked to CNN about the controversial, loose-knit groups that espouse a commitment to the Constitution.

"The Tea Party movement knows that there are tens of thousands of dedicated racists and ultra nationalists in their ranks," Jealous said. Those groups "must be repudiated by the regular, law-abiding members or they must take responsibility," Jealous added, saying "they can't have it both ways."

END_OF_DOCUMENT_TOKEN_TO_BE_REPLACED

The cash boost puts Rubio in prime position to blanket the expensive Florida airwaves in what's expected to be a tight three-way battle come November.

Rubio's campaign said it has raised $11 million since the beginning of the tumultuous Senate race, which once pitted Rubio against Gov. Charlie Crist in the GOP primary.

Crist fell out of favor with Republican activists and is now seeking the Senate seat as an independent, non-party affiliated candidate. He has not yet released his second quarter fundraising totals.
END_OF_DOCUMENT_TOKEN_TO_BE_REPLACED

Sotomayor in her own words

[cnn-photo-caption image= http://i2.cdn.turner.com/cnn/2010/images/07/12/art.sotomayor.0628u.gi.jpg caption ="Supreme Court Justice Sonia Sotomayor’s memoir will be published by Knopf Publishing."]Washington (CNN) - Supreme Court Justice Sonia Sotomayor will pen an memoir about her climb to the bench of the highest court in the country. The book, which does not yet have a title, will be published by Knopf Publishing.

The memoir will include details about Sotomayor's childhood including growing up in New York City, her relationship with her mother, and the loss of her father when she was young. The memoir will also cover her years at Princeton and Yale Law School, and her eventual legal career.

"I am honored to be working with the distinguished publishing house of Alfred A. Knopf on the publication of my memoir," Sotomayor said in a release put out by Knopf Publishing Monday.

A previous six-month ban issued in the wake of the Gulf oil disaster was thrown out by a federal judge. Last week, a federal appeals panel rejected the government's request to overturn the lower court judge's decision.

The ban would prevent further deepwater drilling in the Gulf of Mexico until officials determine what went wrong in the April 20 explosion and fire at an oil rig that led to oil gushing into the ocean 5,000 feet below the surface.

RNC website asks 'Play Golf or Save the Gulf?' 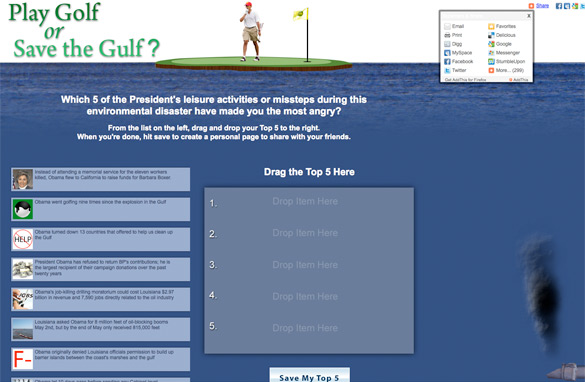 Washington (CNN) - Play golf or save the gulf?

That's the question asked on a new website launched Monday by the Republican National Committee. It lists 13 "leisure activities or missteps" made by President Obama since the Deepwater Horizon oil rig exploded on April 20, and visitors can list their top five and share them on Twitter and Facebook.

"President Obama's frustrating tendency to hit the links rather than devote his undivided attention to providing a solution to the worst ecological disaster in American history represents an unacceptable lack of seriousness and focus," RNC Chairman Michael Steele said in a statement provided to CNN. "While communities along the Gulf Coast are reeling from the devastating economic and environmental impact of the ongoing spill, it is beyond offensive that this president would even think of scheduling a tee time."

“It’s nice to know that Michael Steele can take time out of his busy schedule of fending off calls for his resignation to play politics with the oil spill," Sevugan said. "And it’s too bad he’d rather play political games than support the Administration’s efforts to hold BP accountable and a pass energy security bill that ensures we are never in a position where we are reliant on big oil companies like BP again. Of course, if we could harness even a fraction of the energy Republicans put into these silly websites we wouldn’t need a new energy bill.”

Washington (CNNMoney.com) - A key Republican senator announced his support for the Wall Street reform bill Monday, placing Senate Democrats within a vote of passing the most sweeping set of changes to the financial system in decades.

"It is a better bill than it was when this whole process started," Sen. Scott Brown, R-Mass., said in a statement. "While it isn't perfect, I expect to support the bill when it comes up for a vote."

But according to new filings with the state ethics commission, another Republican heavyweight also swooped in at the last minute - apparently under the radar - to help Haley capture the GOP nomination: Louisiana Gov. Bobby Jindal.

END_OF_DOCUMENT_TOKEN_TO_BE_REPLACED

After Obama was in Las Vegas late last week to attend two events for Senate Majority Leader Harry Reid, the Las Vegas Review Journal published a tough editorial Sunday that faulted Obama's policies on taxes and other economic issues as the White House and Capitol Hill try to turn around the struggling economy.

"President Obama once again left behind a sinking feeling that neither he nor Sen. Reid have a clue how to pull this country out of its current dire economic straits," the paper's editorial said.

In a series of tweets posted Sunday, Palin echoed the editorial's sentiments. "What happens in Vegas shouldn't stay in Vegas;pls circulate this," the former GOP vice presidential hopeful and Tea Party favorite tweeted before dropping a link to the editorial.

Gingrich back in Iowa

The former House speaker and possible 2012 Republican presidential hopeful is scheduled to lead a workshop Monday for GOP candidates running this year for the Iowa legislature.

At a news conference prior to the workshop, Gingrich said "every Republican's focus should be on '10. It will set the stage for '12"

While in Des Moines, Gingrich also attended a fundraiser for Brad Zaun, the Republican candidate for Iowa's third Congressional district.