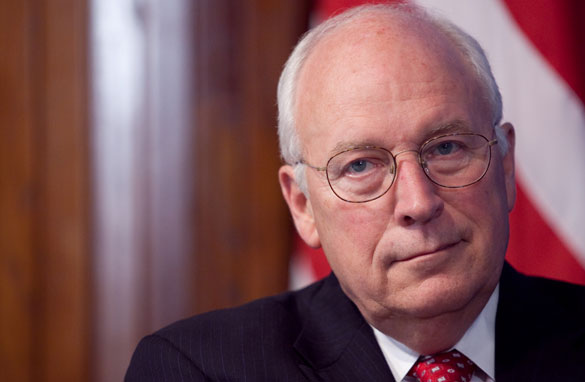 During the operation last week at the Inova Fairfax Heart and Vascular Institute, doctors implanted a small pump that "improves heart function and will enable me to resume an active life," Cheney's statement said.

"The operation went very well and I am now recuperating," the statement said.

Cheney has a history of heart problems, including five heart attacks dating back to the first one he suffered in 1978 at age 37.

END_OF_DOCUMENT_TOKEN_TO_BE_REPLACED

Click to watch video
(CNN) – A controversial Mason City, Iowa billboard that featured President Barack Obama next to images of Adolf Hitler and Vladimir Lenin was papered over Wednesday, according to a report by the Mason City Globe Gazette.

The billboard went up last week, the local newspaper reported, and was ordered and paid for by the North Iowa Tea Party. The billboard showed Obama underneath the label "Democrat Socialism," Hitler under the label "National Socialism," and Lenin under the label "Marxist Socialism." The word "change," one of Obama's trademark slogans from his White House run, appeared beneath each of the images. And the phrase "Radical Leaders Prey on the Fearful & the Naïve" was written across the bottom of the billboard.

The North Iowa Tea Party, the local Tea Party group behind the billboard, has not responded to requests for comment.

A letter posted to the business group's site and a summit with 500 business leaders were the latest moves in an ongoing battle between big business and the Obama administration.

The two are at odds over the best way to keep the recovery from slipping into a double-dip recession. The Chamber believes tax cuts are key to job creation. The Obama administration, however, has focused on stimulus and spending to create jobs.

The Chamber said in its letter that the administration "vilified industries while embarking on an ill-advised course of government expansion, major tax increases, massive deficits and job-destroying regulations."

Washington (CNN) - Democrats racing to protect their congressional seats also face a serious battle on their other flank: state capitals. One analyst has found that a quarter of state legislatures are in play this November, with the vast majority of the bodies at risk controlled by Democrats.

"I've been doing this for five cycles now and already we have the most chambers in play as basically at any point, going back to 2002," said Lou Jacobson, who writes for PolitiFact and recently completed an extensive analysis on state legislatures for Governing magazine.

"The other really striking thing," he said, "is this (election) is the biggest differential between the two parties."

END_OF_DOCUMENT_TOKEN_TO_BE_REPLACED

The senior officials said that at a private Capitol Hill meeting on Tuesday night, a string of House Democrats - including House Speaker Nancy Pelosi - expressed deep frustration that Gibbs had played into Republicans' hands by answering a hypothetical question on NBC's "Meet the Press" about whether Democrats may lose their grip on power.

In a statement that senior White House officials maintain was blindingly obvious and really not newsworthy, Gibbs said on Sunday, "I think there is no doubt there are enough seats in play - that could cause Republicans to gain control."

END_OF_DOCUMENT_TOKEN_TO_BE_REPLACED

Angle on refusing 'mainstream media' interviews: 'There's no earnings for me'

The Republican made the comments to David Brody of The Christian Broadcasting Network in an interview on Tuesday. Angle is battling to oust Senate Majority Leader Harry Reid in the November election.

"People say that I went 'dark.' I didn't," Angle said. "I have done over 60 interviews. I quit counting a couple of weeks ago. But the whole point of an interview is to use it like they say, 'earned media,' to earn something with it. And I'm not going to earn anything from people who are there to badger me and use my words to batter me with."

The candidate went on to explain how mainstream media interviews won't pay off for her campaign politically – or financially.

END_OF_DOCUMENT_TOKEN_TO_BE_REPLACED

"The president looks forward to hearing the ideas of the group on ways to spur new investments in clean energy," the statement said.

Honeywell CEO David Cote and Bank of America CEO Brian Moynihan are among the business leaders participating in the meeting.

(CNN) - Congress tackled the role of religion and ethics in the politically explosive immigration debate Wednesday as biblical passages and church doctrines were invoked during a heated discussion of various reform proposals.

The argument exposed a sharp philosophical divide on an issue that has taken center stage in the wake of Arizona's passage of a controversial law designed to crack down on illegal immigration.

"We are so far apart philosophically," one Democratic congresswoman said, that it's hard to see how a middle ground can be found.

[cnn-photo-caption image= http://i2.cdn.turner.com/cnn/2010/images/07/14/art.randpaul.file5.cnn.jpg caption ="Rand Paul said Wednesday that if he's elected, he would like to band together with other conservatives to form a ‘Tea Party Caucus.’"]Washington (CNN) - Next year's Congress will likely feature an array of fresh faces and entertaining personalities - and it might even have a new voting bloc if Kentucky Senate candidate Rand Paul has his way.

Paul told the National Review Wednesday that if elected, he hopes to band together with like-minded conservatives to form what he called a "Tea Party Caucus" that will advocate for small government ideals.

"I think I will be part of a nucleus with Jim DeMint and Tom Coburn, who are unafraid to stand up," Paul said. "If we get another loud voice in there, like Mike Lee from Utah or Sharron Angle from Nevada, there will be a new nucleus.

"Term limits, a balanced-budget amendment, having bills point to where they are enumerated in the Constitution – those issues resonate with the tea party," he continued. "I know Republicans are trying to get something going, and I don't know their list, but if I had a contract with America, these things would be in it. These are not radical ideas – they are reform-minded, good-government ideas."

END_OF_DOCUMENT_TOKEN_TO_BE_REPLACED

Records from the Westchester County Clerk show that Kennedy filed for divorce form his wife Mary Kennedy on May 12.

The next evening, according to police records, Bedford police responded to a 911 call. When police arrived at the Kennedy residence they found the couple in an argument over taking their four children to a carnival at St. Patrick's School.