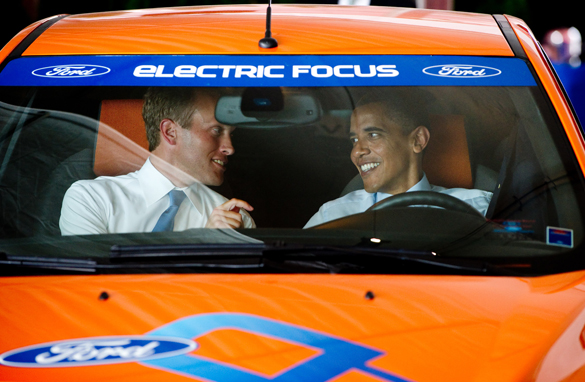 The lower cost "will make electric and hybrid cars and trucks more affordable for more Americans," Obama said. "And that not only means more jobs, but also that we'll be less dependent on oil."

Previewing the Democratic message for the November mid-term congressional election, Obama said it is "absolutely clear" the nation's economy is headed in the right direction, and that "the surest way out of the storms we've been in is to keep moving forward, not to go backward."

"There are some folks who want to go back - who think we should return to the policies that led to the recession," Obama said of Republican critics, accusing them of choosing political obstruction over working with Democrats for solutions.

At a Republican news conference Thursday, GOP senators called for an end to policies that they said hinder job creation.

"It is time this administration and its Capitol Hill ally stop this job-killing agenda," said Sen. Orrin Hatch, R-Utah.

The president, however, reiterated his long-standing assertion that things would have been worse without the economic stimulus bill and other job creation efforts.

New projects like the Michigan plant are helping the United States compete with other nations for a foothold in the clean energy industry of the future, Obama said.

He challenged his GOP critics to ask workers filling the new jobs if they would have preferred for the batteries they will be building to instead be manufactured overseas.

"It will be a boost to the economy of the entire region," he said.