[cnn-photo-caption image= http://i2.cdn.turner.com/cnn/2010/images/07/16/art.edwards0716.gi.jpg caption="A book by a former aide to John Edwards is going to be made into a movie."]
(CNN) - With "Charlie Wilson's War" and "The West Wing" among his writing credits, Aaron Sorkin is no stranger to political drama.

Now he'll make his feature directorial debut with a movie about former presidential candidate John Edwards and his affair with mistress Rielle Hunter.

The writer/producer has acquired the rights to Andrew Young's book, "The Politician: An Insider's Account of John Edwards's Pursuit of the Presidency and the Scandal That Brought Him Down," CNN confirmed.

Cafferty: Should Dems pop out champagne if Palin most popular in GOP for 2012?

[cnn-photo-caption image= http://i2.cdn.turner.com/cnn/2010/images/07/16/art.s.palin.jpg caption=" Join the conversation on Jack's blog."]
There are five Republicans generally viewed as the most likely contenders for the 2012 presidential nomination.

See where this is going?

But the most popular of the Republicans seen vying for the nomination in 2012 is... you guessed it... Sarah Palin. And it's not even close.

Palin, who describes herself as a mama grizzly bear, has a whopping 76 percent favorable rating among Republicans, according to a new Gallup poll.

Compare that to Huckabee, who gets a 65 percent favorable rating, Gingrich 64 percent followed by Romney with 54 percent and Jindal with 45 percent.

First family off to Maine for the weekend 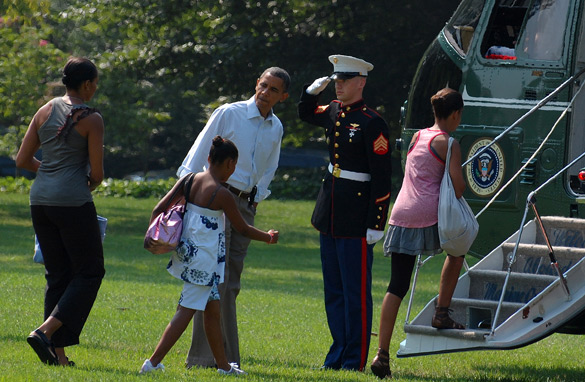 “Carte Goodwin is unquestionably among West Virginia’s best and brightest.

“He is widely respected and admired across our state, and has served West Virginia as an attorney, General Counsel to Governor Manchin and Chairman of the West Virginia School Building Authority – working with great character, dignity and professionalism to serve and protect the public good, and always keeping West Virginia families and the challenges they face each day at the very forefront of his thinking.”

Greene raised eyebrows when, in the wake of his primary victory, he suggested to The Guardian, a British newspaper, that one idea to help create jobs in his state is to "make toys of me, especially for the holidays. Little dolls. Like maybe action dolls. Me in an army uniform, air force uniform, and me in my suit."

It's an idea the South Carolina native did not back away from in an interview with CNN last week.

"The reaction has been good. I am a true American hero and if any of the toy companies want to put something like that forward that would be good." He said he has not received any inquiries. He said it would help spur retail sales. "Just a good positive thing for the kids" is how he described it.

END_OF_DOCUMENT_TOKEN_TO_BE_REPLACED

Poll: Palin hot amongst Republicans, others not so much

[cnn-photo-caption image= http://i2.cdn.turner.com/cnn/2010/images/05/21/art.palin.closeup.jpg caption ="According to a new poll, 76 percent of Republicans have a favorable view of Sarah Palin."]Washington (CNN) - For many Democrats in Washington, a Sarah Palin presidential run would be a dream come true.

As their thinking goes, Palin's popularity among Republican base voters in early primary states would be enough to swamp the rest of the 2012 field and vault the conservative firebrand to the GOP nomination.

But in a general election, her standing among independent and swing voters, which began to crater in the closing weeks of the 2008 presidential race, might be too much to overcome.

New (admittedly early) polling data suggests that very scenario could play out if she decides to seek the White House.

END_OF_DOCUMENT_TOKEN_TO_BE_REPLACED

Goodwin, 36, served as Manchin’s general counsel from 2005 until 2009. He is a lawyer in the Charleston law firm Goodwin & Goodwin.

Manchin is expected to officially name Goodwin later this afternoon. A date for a special election still needs to be set, but it could occur as early November 2. Manchin, himself, has expressed interest in running for the seat.

A spokesman for the governor declined to confirm Goodwin’s expected appointment.

Goodwin received his undergraduate degree from Marietta College and his law degree from Emory University.

Update 4:41 p.m.: CNN has learned that Williams has removed the version of his blog post that was quoted in this story and replaced it with a "personal note" to readers.

(CNN) – The war of words between the NAACP and the Tea Party movement has reached a new level, with the spokesman for a national Tea Party organization penning a controversial blog post and a representative of the NAACP calling the post "a feeble attempt at satire" and offensive.

In an effort to mock to the NAACP's recent criticism of the Tea Party movement, Mark Williams, a conservative radio talk show host and spokesman for the Tea Party Express, published a post on his blog that is a mock letter from NAACP president Benjamin Jealous to former President Lincoln.

The mock letter continues by taking on several core beliefs and positions of the Tea Party movement including the conservative movement's desire to end bailouts of big business, to reduce the size and scope of government, to reduce government spending and to cut taxes.
END_OF_DOCUMENT_TOKEN_TO_BE_REPLACED