S.C. Senate candidate aims to 'get America back to work'

"My campaign is about ... moving South Carolina and America forward," the 32-year-old Greene told a friendly audience in his hometown of Manning during a brief, halting speech that at times jumped from one topic to the next.

The speech, given at a meeting of the local chapter of the NAACP, was voters' first glimpse of Greene's campaign vision as he mounts an unlikely challenge against Republican incumbent Sen. Jim DeMint.

NAACP: Getting rid of Williams 'a good start'

State of the Union: Getting to know Sen. Mitch McConnell

State of the Union: Candy Crowley's Crib Sheet for July 18

[cnn-photo-caption image= http://i2.cdn.turner.com/cnn/2010/images/04/04/art.candycribnew0404.cnn.jpg caption="In her Crib Sheet, CNN's Candy Crowley wraps the news from Sunday's political talk shows."]
The Gibbs Antidote
Joe Biden, Vice President of Optimism, appeared on for ABC to predict that Democrats will “shock the heck out of everybody” in the November elections. He means that in a good way. It was a veritable chorus of Democratic Yay-Sayers this Sunday, bravehearts all, Reps. Chris Van Hollen, James Clyburn, Steny Hoyer and Sen. Robert Menendez.

To be clear, they’re not talking victory as generally defined in every language around the globe except political-speak. They’re talking about not getting beaten too badly. Hoyer: “I don’t think we’re talking about a big loss…”

Getting with the Program
Remember that icky feeling Democrats were getting that the White House was not all that vested in winning House seats and intends to blame election losses this year on bad campaigns? There’s been a meeting of the minds. As Van Hollen delicately explained “…the day after the elections, it will be interpreted as a referendum on the President’s policies in the press, whether they like it or not. So we are on the same page.” Check please.

Dumped by the Tea Party
David Webb, of the National Tea Party Federation says his organization has expelled the Tea Party Express and Mark Williams. Make sense of that if you will. Williams authored a controversial blog featuring a dialogue between “coloreds” and President Lincoln. He called it a “satire.” Many others called it offensive.

BTW, the Vice President of Optimism said he wouldn’t characterize the whole Tea Party movement as racist, though there are racist elements. Nearly every Sunday guest was asked the Tea Party/Racism question. Nearly everyone answered. Senate Republican leader Mitch McConnell took a pass, saying “I’m not interested in getting into that debate.”

Your Can Stop the Oil From Going Into the Ocean But You Can’t Take the Politics Out of the Oil (Is That How That Goes?)
On the first oil-free Sunday in almost three months, at least three Republicans went after the President for incompetence in cleaning up the spill. Is this a co-inky-dink? Only 106 more days until the election. Or, as we put it, 15 more Sundays.
END_OF_DOCUMENT_TOKEN_TO_BE_REPLACED 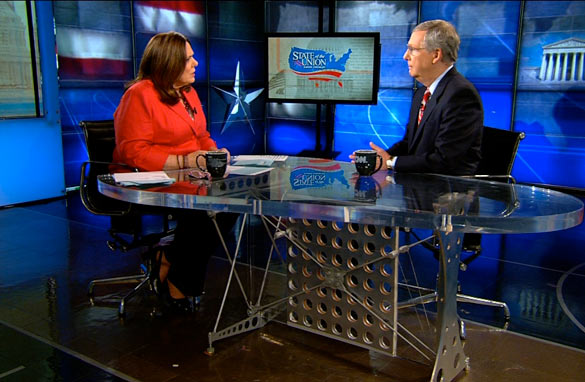 "How long can the other side run against the previous administration?" asked Senate Minority Leader Mitch McConnell. "They've been in charge now for a year and a half. (Photo Credit: CNN)

Washington (CNN) - If anyone doubted whether campaigning had started for the mid-term congressional elections in November, the answer became clear on Sunday.

Democratic and Republican politicians rolled out their main campaign themes on morning talk shows less than four months before voters will decide races for all 435 House seats and at least 36 of the 100 Senate posts.

West Virginia could decide to hold a special election in November to fill the seat of the late Democratic Sen. Robert Byrd, which would put 37 Senate seats in play.

To Republicans, the election is about halting the free-spending policies of a Democratic-controlled White House and Congress. For Democrats, the choice for voters is between moving forward to tackle tough issues or going back to failed GOP policies of the past.

While Democrats repeatedly invoke the crippling recession and increased deficits of the Bush administration, Republicans say the problem now is how the majority party forces through unpopular and irresponsibly expensive legislation.

"How long can the other side run against the previous administration?" asked Senate Minority Leader Mitch McConnell, R-Kentucky, on the CNN program "State of the Union." "They've been in charge now for a year and a half. They've been on a gargantuan spending spree."

On the same show, House Majority Leader Steny Hoyer, D-Maryland, shot back that the nation needs to progress rather than boomerang.

[cnn-photo-caption image= http://i2.cdn.turner.com/cnn/2010/images/07/18/art.hoyeriso0718.cnn.jpg caption="House Majority Leader Steny Hoyer pointed to a trio of Democratic victories in special House elections to downplay the notion that his party will suffer big losses this November."]
Washington (CNN) – Pointing to victories in recent special elections, the number two Democrat in the House sought Sunday to buck the conventional wisdom about his party’s prospects in this fall’s midterms.

“I don’t think we’re talking about a big loss,” House Majority Leader Steny Hoyer of Maryland, said on CNN’s State of the Union.

Hoyer told CNN Chief Political Correspondent Candy Crowley that his party has done well in special congressional elections since the passage of the health care bill.

“After the last summer, which was a very hot summer politically, as you recall, we won a number of races during that period of time. Health care was a very hot topic.”

Notwithstanding the potential political fallout from passage of the health care overhaul, Hoyer pointed out that Democrats had won special elections in New York’s 20th and 23rd congressional districts and Pennsylvania’s 12th .
END_OF_DOCUMENT_TOKEN_TO_BE_REPLACED

State of the Union: Hoyer sounds off on public's anxiety

State of the Union: Up Close on Nancy Pelosi vs. Robert Gibbs

Related: Pelosi dismisses reports of tension with the White House

McConnell defends GOP against Dems' 'party of no' charge

Click to watch video
Washington (CNN) – With midterm elections less than four months away, the top Republican in the Senate said Sunday that the GOP is “proud” to oppose many aspects of Democrats’ agenda. Senate Minority Leader Mitch McConnell, R-Kentucky, also laid out some issues where he said Republicans support President Obama.

Appearing on CNN’s State of the Union, McConnell ticked off a litany of Democratic agenda items that his party has opposed.

“Look, what we are proud to say no to, and I think what the public wants us to say no to, are things like the government running banks, insurance companies, car companies, nationalizing the student loan business, taking over our health care,” McConnell told CNN Chief Political Correspondent Candy Crowley.

McConnell also pointed to the recently passed financial regulatory reform bill, the growth of the federal workforce, action by the Federal Communications Commission to assert authority over the internet, and the possibility that the National Labor Relations Board will change the law regarding how unions can be formed.

“Yes, we are opposed - let me make it clear, we are absolutely opposed to all of those things, and proudly so,” McConnell said.

But the GOP leader quickly added that his party agrees with the president on other issues and is willing to work on passing some legislation the president says he wants.
END_OF_DOCUMENT_TOKEN_TO_BE_REPLACED