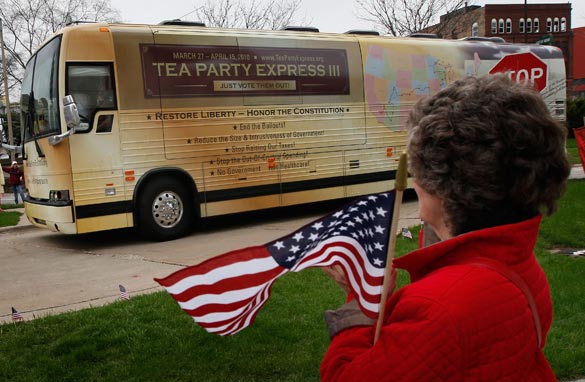 "The Tea Party Express with over 400,000 members is by far larger than the Tea Party Federation’s entire membership. Most rank-and-file tea party activists think we’re talking about Star Trek when we try to explain who the “Federation” is. Given the absurdity of the actions by the "Federation," this is quite fitting, since their conduct is alien to our membership.

"Groups trying to say who can or can't be 'expelled' from the tea party movement is arrogant and preposterous. Perhaps this explains why so many tea party groups have left the "Federation" during the past few months. Whatever the reason, most tea party activists are focused on taking back their country and the upcoming 2010 elections and not silly power games being played by individuals such as those in the "Federation."

"To add to the absurdity of the "Federation" they have also informed us that our members can't participate in something called their "basecamp" communication network, which makes us think that the individuals involved in the "Federation" spend a bit too much time watching science fiction movies and cartoons. We here at the Tea Party Express prefer a focus that is more grounded in the Constitution and electing tea party conservatives to offices of import in these 2010 elections.

The "Federation" has enabled and empowered the NAACP's racist attacks on the tea party movement, and they should be ashamed of themselves.

"Circular firing squads of groups within the tea party movement attacking one another accomplish nothing, and on this issue the Tea Party Federation is wrong, and has both enabled and empowered the NAACP’s racist attacks on the tea party movement. Which is something they'll realize when they beam themselves back from basecamp."