As one British reporter put it, David Cameron was quote "slumming it in business class" on the flight from London to Washington.

How refreshing. Cameron didn't take his own private jet, he didn't even fly first class. Turns out Cameron is actually walking the walk when it comes to fiscal austerity. Britain, like much of Europe, is in the midst of making drastic cuts to many government programs in order to keep its economy afloat.

Under normal circumstances, Prime Ministers travel on their own planes. They either charter a Boeing 747 or 767 or use military jets. But Downing Street officials say that Cameron's commercial flight saved $300,000. In the grand scheme of things, the amount isn't that significant - but the gesture is huge.

Obama did not appear at the White House briefing Wednesday to discuss the issue. At the briefing, White House Press Secretary Robert Gibbs apologized to Sherrod on behalf of the administration.

Last year, the president did make a surprise appearance at a briefing to address reporters regarding the controversy surrounding the arrest of Harvard professor Henry Louis Gates Jr., even though White House officials had said he wouldn't speak publicly about it.

END_OF_DOCUMENT_TOKEN_TO_BE_REPLACED

"A successful businesswoman and public servant, Karen Handel's blend of executive, political, and business experience is just what Georgia needs at this critical time," Romney said in a statement Wednesday. "The leadership skills that she has honed in both the private and public sectors will enable her to make tough decisions and enact the reforms needed to get the economy back on track and foster job creation."

Handel and Rep. Nathan Deal emerged from a four-way primary battle and will now face off in the Aug. 10 runoff. Handel was boosted in the primary by endorsements from Sarah Palin and Arizona Gov. Jan Brewer. Deal is backed by former House Speaker Newt Gingrich, who represented Georgia's sixth congressional district for two decades.

Romney stayed out of the primary, an aide said, because one of the candidates, state Sen. Eric Johnson, had backed Romney during his 2008 presidential bid.

END_OF_DOCUMENT_TOKEN_TO_BE_REPLACED

[cnn-photo-caption image= http://i2.cdn.turner.com/cnn/2010/images/07/21/art.changingcharliead.youtube.jpg caption ="A new ad is out in Florida attacking Gov. Charlie Crist."] Washington (CNN) - An outside group is weighing on the Florida Senate race with a new TV ad attacking Gov. Charlie Crist for shifting his positions on taxes, the federal stimulus bill and cap and trade legislation.

The commercial is being funded by The American Action Network, a Republican think tank and advocacy group headed by former Minnesota Sen. Norm Coleman and Rob Collins, a former aide to House Minority Whip Eric Cantor. The commercial will run for one week in the Tampa/St. Petersburg and Panama City markets.

The ad accuses Crist, who in April left the GOP to run as an unaffiliated candidate in the Senate battle, of flip-flopping on an anti-tax pledge he signed when running for governor, as well running away from his support for the stimulus bill while still in the Republican primary.

END_OF_DOCUMENT_TOKEN_TO_BE_REPLACED 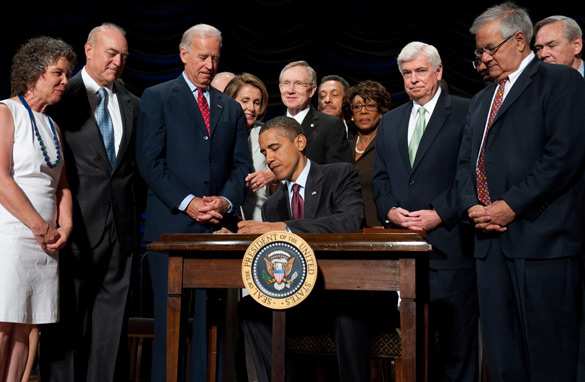 New York (CNNMoney.com) - After more than a year of work and months of grueling debates on Capitol Hill, President Obama on Wednesday signed the Wall Street reform bill, the most sweeping overhaul of the financial system since the New Deal.

"These reforms represent the strongest consumer financial protections in history," Obama said. "And these protections will be enforced by a new consumer watchdog with just one job: looking out for people – not big banks, not lenders, not investment houses – in the financial system."

In a major signing ceremony at the Ronald Reagan Building in Washington, Obama was flanked by a number of lawmakers who worked on the legislation, including Sen. Christopher Dodd, D-Conn., and Rep. Barney Frank, D-Mass., the two committee chairmen who sponsored the bill.

[cnn-photo-caption image= http://i2.cdn.turner.com/cnn/2010/images/07/21/art.bachmann.0320p.cnn.jpg caption ="Rep. Michele Bachmann is a member of a newly formed Tea Party coalition in Congress."] Washington (CNN) - The founder of a new Tea Party caucus in the House of Representatives says her group's main mission is to listen to Tea Party activists concerns, but not to serve as a mouthpiece for the movement or to vouch for actions by Tea Party members.

"We decided to form a Tea Party caucus for one very important purpose: To listen to the concerns of the Tea Party," said Rep. Michele Bachmann, at a news conference Wednesday morning following the first meeting of the caucus.

END_OF_DOCUMENT_TOKEN_TO_BE_REPLACED

[cnn-photo-caption image= http://i2.cdn.turner.com/cnn/2010/images/07/21/art.union.cnn.jpg caption ="The New Hampshire Union Leader published a scathing Op-ed on the front page of Wednesday’s newspaper."] (CNN) - Days after her first foray this election cycle into New Hampshire politics, Sarah Palin is getting a chilly reception from one of the crucial presidential primary state's most conservative and influential newspapers.

In a blistering Op-Ed on the front page of the New Hampshire Union-Leader's Wednesday edition, publisher Joseph McQuaid writes the former Alaska governor and vice presidential nominee knows little about the Granite State and even less about its residents.

"Former Gov. Palin isn't making these endorsements because, as she claims, she has spent time in New Hampshire and thus knows that the people here are a lot like Alaskans. She spent a few hours here on one day during the 2008 Presidential election. That's still more time than she spent getting to know Ayotte, but it takes quite a bit longer to know New Hampshire," McQuaid writes in the editorial.

Palin waded into the New Hampshire political landscape Monday when she backed former state Attorney General Kelly Ayotte's Senate bid. The "Mama Grizzly," as Palin called Ayotte, is the frontrunner in a primary race against three other Republicans. Her endorsement was greeted with enthusiasm from Ayotte, herself a social conservative running in a state where Republicans are generally more concerned with fiscal policies.

END_OF_DOCUMENT_TOKEN_TO_BE_REPLACED

Blago will not testify, lawyers rest their case

(CNN) - Lawyers for ousted Illinois Gov. Rod Blagojevich rested their case Wednesday without calling him to testify in his federal corruption trial.

‪“It is troubling that Shirley Sherrod was asked for her resignation as Georgia State Director for Rural Development at the U.S. Department of Agriculture because of an edited video clip. A full review of the clip demonstrates Ms. Sherrod’s personal transformation. She was clearly educating the public about the power of redemption. It is now apparent that Secretary Vilsack did not have all of the facts available to him and overreacted.‬

‪“The Congressional Black Caucus continues to believe that Ms. Sherrod was unfairly asked to resign, without due process and should be reinstated immediately. There are many individuals still serving in the Department of Agriculture who were responsible for years of discrimination against African American farmers.‬

‪“We also believe that a national dialogue on race must be held. Last November, we held a forum on race in Washington DC to begin the discussion. The basis for Ms. Sherrod’s resignation is another example of why we must not sweep race under the rug. Rather, we must come together as a nation and recognize that we do not live in a post-racial era and that while difficult, we must confront these issues head on with clarity and without fear.‬

‪“Ms. Sherrod has been an effective public servant and it would be tragic to lose a person of such caliber, competence and commitment to fairness and equality and one who has dedicated her life to working for a more perfect union.”‬

Capito says no to Senate bid

"I will not be a candidate for U.S. Senate this year, and with the voters support, I intend to serve my full term in the House of Representatives and not run for any other office until 2012," Capito said in a statement.

West Virginia Gov. Joe Manchin announced Tuesday that he is running for the seat.

Manchin's announcement came one day after the West Virginia state legislature approved a plan to hold a special election in November to fill Byrd's seat. Late Monday night, Manchin - a popular two-term Democratic governor - signed the measure after a compromise worked out by state lawmakers won final approval. The primary contests will be August 28 and the general election for Byrd's successor will take place as part of the congressional mid-term contests on November 2.