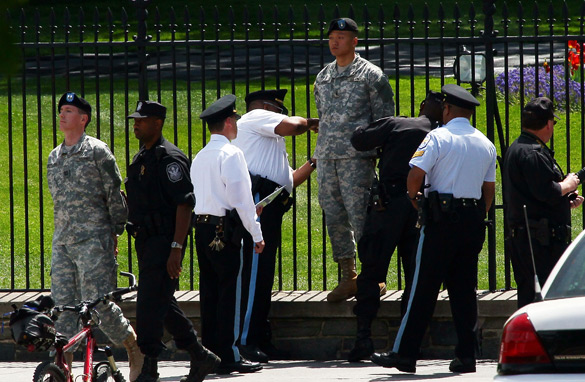 Lt. Dan Choi, an outspoken critic of the military’s “Don’t Ask, Don’t Tell” policy who is shown here during an April 20, 2010 protest in which he handcuffed himself to the White House gates, announced Thursday that he has been discharged from the U.S. military. (PHOTO CREDIT: Getty Images)

(CNN) - One of the most outspoken gay critics of the military's "don't ask, don't tell" policy said Thursday that he has been discharged from the Army.

Lt. Dan Choi, who was arrested in March for handcuffing himself to a White House fence in protest of the policy, released a statement saying he had been honorably discharged.

According to an invitation obtained by CNN, the former Massachusetts governor is listed as the "special guest" at the August 12 event in Tuftonboro, New Hampshire for the Republican State Committee.

One week earlier, the 2008 Republican presidential candidate will also be in New Hampshire for an August 5 fundraiser to benefit the House Republican Victory PAC, which supports GOP candidates in the state.

Earlier this summer, in what looked like another move towards a possible run for the 2012 Republican presidential nomination, Romney donated $20,000 to the Republican Party of New Hampshire. According to a state GOP spokesman, Romney's contributed $30,000 since the beginning of this election cycle.

END_OF_DOCUMENT_TOKEN_TO_BE_REPLACED

Washington (CNN) - The House of Representatives passed a bill Thursday pushing back the deadline to file for extended unemployment benefits to the end of November. The $34 billion measure, which cleared the Senate Wednesday, now moves to President Barack Obama's desk to be signed into law.

The President reached Ms. Sherrod by telephone at about 12:35. They spoke for seven minutes.

The President expressed to Ms. Sherrod his regret about the events of the last several days. He emphasized that Secretary Vilsack was sincere in his apology yesterday, and in his work to rid USDA of discrimination.

The President told Ms. Sherrod that this misfortune can present an opportunity for her to continue her hard work on behalf of those in need, and he hopes that she will do so.

Schakowsky calls on opponent to stop blogging for Breitbart

[cnn-photo-caption image= http://i2.cdn.turner.com/cnn/2010/images/07/22/art.schakowsky.09u.gi.jpg caption ="Illinois Rep. Jan Schakowsky called on her Republican challenger to stop blogging for Andrew Breitbart."] (CNN) - Conservative blogger Andrew Breitbart has hundreds of contributors to his website, and one of them is a Republican challenging Illinois Democratic Rep. Jan Schakowsky for her seat in Congress.

On Thursday, in the wake of the Shirley Sherrod firing controversy, Schakowsky called on her opponent, Joel Pollak, to "denounce Breitbart's intentional distortion of the truth and to end any further association with his website, BigGovernment.com."

Backlash against Breitbart has mounted since Monday, when he published a video of Sherrod, a USDA employee at the time, speaking to a crowd of NAACP members in Georgia. Liberals accuse Breitbart of deliberately editing the video to paint a portrait of a racist woman and NAACP members who applaud discrimination.

"Breitbart's publication of a video, which intended to turn the point of her speech into its exact opposite is the lowest form of political mudslinging," Schakowsky said in a statement.

END_OF_DOCUMENT_TOKEN_TO_BE_REPLACED

Facebook is looking into "this incident to determine why and how the content in question was removed," spokesman Andrew Noyes said in a statement provided to CNN.

Palin re-posted the Facebook "note" Thursday morning. In the re-posted version, Palin responds to New York City Mayor Michael Bloomberg who was, in turn, responding to earlier comments by Palin about the planned mosque.

END_OF_DOCUMENT_TOKEN_TO_BE_REPLACED

CNN Poll: Obama approval dips but not among blacks

[cnn-photo-caption image= http://i2.cdn.turner.com/cnn/2010/images/07/19/art.getty.obama.seal.jpg caption ="President Obama’s approval rating has dipped below 50 percent again, according to a new CNN poll."] Washington (CNN) - President Barack Obama's approval rating among all Americans has dipped below 50 percent for the first time since March, but he remains extraordinarily popular among African-Americans, who also overwhelmingly approve of how the president has handled race relations, according to a new national poll.

A CNN/Opinion Research Corporation survey released Thursday indicates that 47 percent of the public approves of the job Obama is doing in the White House, with half saying they disapprove of his performance in office.

According to the poll, more than nine out of ten black respondents give Obama a thumbs up on how he is handling his job. 57 percent of Hispanics questioned also approve, but only 37 percent of white respondents feel that way.

END_OF_DOCUMENT_TOKEN_TO_BE_REPLACED

Ben Nelson goes against his party–again

[cnn-photo-caption image= http://i2.cdn.turner.com/cnn/2010/images/07/22/art.bennelson.0715u.gi.jpg caption ="Ben Nelson bucked his own party again this week, voting against a bill to extend unemployment benefits."] Washington (CNN) - Democratic Sen. Ben Nelson is not afraid to buck his party when it comes to fiscal issues.

The Nebraskan did it again this week, voting against a bill extending unemployment insurance benefits to millions of Americans. The bill passed Wednesday with the help of a couple of Repubican votes. It now goes to the House where it is expected to pass.

The extension, which lapsed in June, failed in an earlier Senate vote after a Republican filibuster.

In this week's votes, Nelson insisted that Democrats find a way to pay for the extension of benefits. He said there are some stimulus funds that could be used - an idea that Republicans back.

"I'm comfortable with my own decision on this," he said. "I made it clear what I think needs to be done." Nelson told CNN.

"There should be no mosque near Ground Zero in New York so long as there are no churches or synagogues in Saudi Arabia. The time for double standards that allow Islamists to behave aggressively toward us while they demand our weakness and submission is over," Gingrich, a potential 2012 presidential candidate writes in a post on his web site Thursday.

"Those Islamists and their apologists who argue for 'religious toleration' are arrogantly dishonest. They ignore the fact that more than 100 mosques already exist in New York City," he adds.