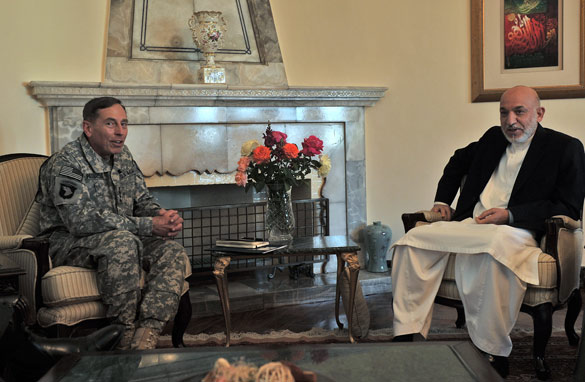 Those admonitions are among the two dozen guidelines for counterinsurgency warfare that Gen. David Petraeus issued to U.S. and allied troops in Afghanistan on Sunday. In his first major public pronouncement since taking command in early July, Petraeus urged American troops and the NATO-led International Security Assistance Force to learn and adapt to the culture of Afghanistan while battling the Taliban insurgents and their allies.

"The decisive terrain is the human terrain," Petraeus wrote. "The people are the center of gravity. Only by providing them security and earning their trust and confidence can the Afghan government and ISAF prevail."

Petraeus led the 2007-2008 campaign to stabilize Iraq after years of insurgent and sectarian warfare following the U.S. invasion of 2003. Some of the steps he took there - ordering troops to work in closely with local allies in outposts close to the people, patrol on foot and without sunglasses and cultivate ties with the local population - are included in Sunday's four-page order.

"Earn the people's trust, talk to them, ask them questions and learn about their lives," he wrote. Coalition troops should be "a good guest," learn the local history and "make sure you have the full story."

"Don't be a pawn in someone else's game," he wrote. "Spend time, listen, consult and drink lots of tea."