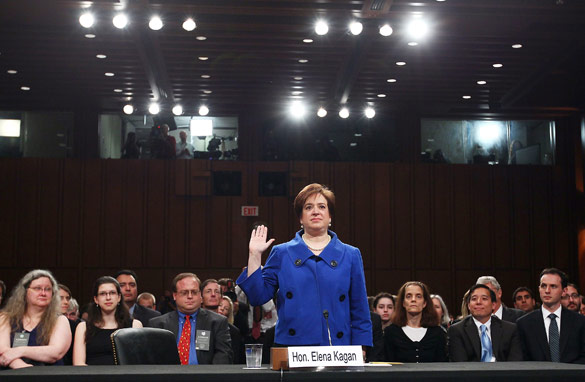 Elena Kagan was confirmed Thursday by the Senate. She is pictured here being sworn in before the Senate Judiciary Committee. (PHOTO CREDIT: Getty Images)

Washington (CNN) - Solicitor General Elena Kagan was easily confirmed Thursday as the next associate justice of the U.S. Supreme Court, completing the 50-year-old native New Yorker's climb to the peak of the American legal profession.

The 63-37 vote was more than enough to blunt any possibility of a last-minute Republican delay or filibuster. Opposition during three days of Senate floor debate was relatively subdued.

Kagan is set to begin a lifetime position as the nation's 112th justice. Administration officials anticipate she will sworn into office Saturday, when she takes the traditional constitutional and judicial oaths. She will then assume her court duties immediately.

Her brisk confirmation was a political victory for President Barack Obama - who placed Justice Sonia Sotomayor on the high court last year - and for Senate Democrats.