(CNN) - The major powerbrokers of Kentucky politics gathered Saturday for the annual Fancy Farm Picnic, a rough and tumble political event in which candidates serve up their best stemwinder and hope it's not drowned out by the raucous audience.

At this year's event, Senate hopefuls Rand Paul and Jack Conway were joined onstage by Senate Minority Leader Mitch McConnell, and much to the delight of the crowd, the three heavyweights each took their turn slinging one-liners.

If a candidate overruns their allotted speaking time at Fancy Farm, they are shooed offstage by a band, just like the Academy Awards. And the gathering is probably the only political event in the country that features an opening prayer that includes the line: "Lord, may our words be gracious and tender today, for tomorrow we might have to eat them."

END_OF_DOCUMENT_TOKEN_TO_BE_REPLACED

The freshman New York Democrat, one of Washington's most web-savvy politicians, used the appearance to press other women to run for office, a rallying cry heard throughout the conference.

“We need you,” Gillibrand told the bloggers. “You don’t have to be afraid [of politics] just because it is a blood sport.”

A frequent blog contributor herself, Gillibrand discussed her experience in the Senate, and specifically the fight against the Stupak amendment – a crucial sticking point for liberal Democrats that turned the debate over health care reform legislation on its head. Gillibrand expressed surprise at the lack of grassroots coordination from women to protest the amendment and pointed to the debate as one where women could have been better organized, and more effective.

END_OF_DOCUMENT_TOKEN_TO_BE_REPLACED

Washington (CNN) - Elena Kagan, building on a long, diverse legal career in government and academia, was officially sworn in as the 112th justice at the Supreme Court on Saturday, promising to "faithfully and impartially" discharge her new judicial duties.

With friends, family and four of her new colleagues looking on, the 50-year-old Kagan took the judicial oath in the court's wood-paneled West Conference Room. It was only the second time such a ceremony was televised at the court.

Chief Justice John Roberts administered the 62-word oath, required of all federal judges. In a private ceremony just moments before, Kagan took a separate constitutional oath across the hall. Both are necessary for her lifetime job to become official.

Kagan beamed as she waved to relatives and guests when walking in for the public ceremony. Among those in the ornate room were her two brothers, as well as former colleagues from the Justice Department, where she served as solicitor general before being tapped by President Obama for the high court on May 10.

END_OF_DOCUMENT_TOKEN_TO_BE_REPLACED

Republicans see an opportunity to knock off a freshman Democrat in New Mexico's 1st district and reclaim a seat they had held for 40 years.

Rep. Martin Heinrich was elected to the House in 2008, one of 33 Democratic freshmen sent to Congress that year. He was a member of the Albuquerque City Council when he announced he would challenge incumbent GOP Rep. Heather Wilson, who had held the seat since 1998. Wilson narrowly won her 2006 re-election bid with 50 percent of the vote and eventually opted to run to replace retiring GOP Sen. Pete Domenici in the U.S. Senate rather than seek a sixth full term. Heinrich went on to win the House seat with 56 percent over Republican Darren White.

END_OF_DOCUMENT_TOKEN_TO_BE_REPLACED 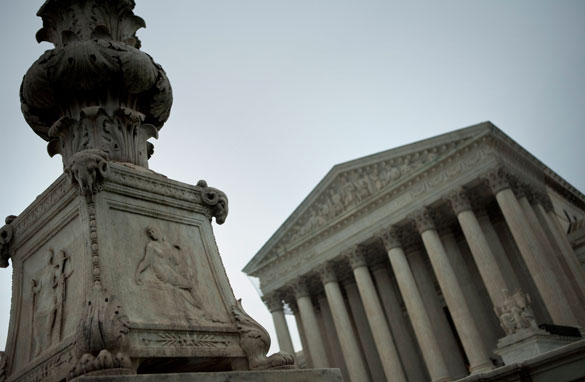 END_OF_DOCUMENT_TOKEN_TO_BE_REPLACED

Roskam: Democrats spending out of control

In his Wednesday ruling, Walker also issued a temporary stay, which stopped his decision from taking effect.

If he lifts his stay, officials in California could immediately be allowed to perform same-sex marriages again. They were able to do so, briefly, before the Proposition 8 ban passed in 2008.