The law prohibits the use or possession of mobile phones and wireless devices, and calls for up to a year in prison for anyone found guilty of trying to smuggle one to an inmate.

War of words between Sestak and Toomey continues

The race is locked in a dead heat. A Quinnipiac University poll of Pennsylvania voters conducted last month indicated that race was tied at 43 percent, with 12 percent undecided.

" … When I came to Congress my first year is when the recession began I was also a damage control officer. Those six months after President Bush left the White House, we lost three million jobs because of the policies he and Congressman Toomey – my opponent – had pursued."

But Toomey argued that tax cuts drive the economy.

END_OF_DOCUMENT_TOKEN_TO_BE_REPLACED

[cnn-photo-caption image= http://i2.cdn.turner.com/cnn/2010/images/07/14/art.randpaul.file5.cnn.jpg caption =" Rand Paul on Tuesday denied an accusation that he kidnapped a woman in college."](CNN) - Kentucky Republican Senate Candidate Rand Paul rejected allegations Tuesday from an anonymous woman that during his college days he and a friend kidnapped her and attempted to force her to use marijuana.

The allegations were part of a larger profile for the GQ magazine by their reporter Jason Zengerle. The piece describes Paul's years as a student at Baylor University, during which the alleged incident took place.

END_OF_DOCUMENT_TOKEN_TO_BE_REPLACED

Describing himself as "an outspoken critic of the anchor baby phenomenon," the former five-term Republican congressman said the question of who is a citizen should be resolved by the courts.

If elected, Tancredo vowed he would trigger a court fight by denying public school funding to the children of illegal immigrants.

Tancredo also said he would force the issue "through the mechanism we use to fund education. We could say for instance that we are not going to provide support for people, the children of people who are here illegally."

END_OF_DOCUMENT_TOKEN_TO_BE_REPLACED 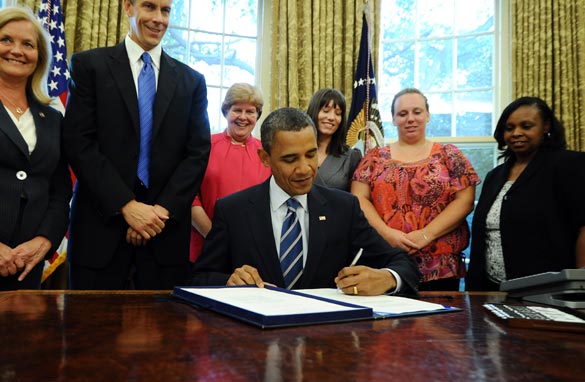 Washington (CNN) - President Barack Obama on Tuesday signed into law a $26 billion measure to help avoid teacher layoffs - a move Democrats claim is necessary in the wake of state and local government cutbacks.

The House gave final approval earlier Tuesday to the bill, which had already passed the Senate.

The measure, which passed the House on a largely party-line 247-to-161 vote, is designed to save the jobs of approximately 160,000 teachers across the country, as well as create and save positions for police officers, firefighters and nurses, according to Democratic leaders.

Rangel challenges House to kick him out

Washington (CNN) - Veteran Rep. Charlie Rangel apologized on the House floor Tuesday for causing any embarrassment by violating chamber rules, but he insisted he is not corrupt and refused to resign.

In a sometimes rambling speech, the New York Democrat defiantly challenged the House ethics committee to move faster on holding a public hearing on the 13 counts of alleged violations against him.

He also challenged fellow House members of both parties to kick him out if they want to get rid of him.

"If it is the judgment of the people here that I should resign," then the ethics committee should expedite its consideration of the charges against him, Rangel said.

END_OF_DOCUMENT_TOKEN_TO_BE_REPLACED

The 30-second spot focuses on illegal immigration and highlights Donnelly's position on the hot-button issue.

" … I voted to hire 5,300 more border agents, penalize any business that hires illegals, deport illegals who commit felonies and eliminate amnesty, because no one should ever be rewarded for breaking the law," Donnelly says.

"That may not be what the Washington crowd wants but I don't work for them, I work for you," Donnelly adds.

END_OF_DOCUMENT_TOKEN_TO_BE_REPLACED

Former NASA Administrator Sean O'Keefe and his son are among the survivors of a plane crash near Dellingham, Alaska, according to EADS North America, where O'Keefe works.

Statements on the death of former Sen. Ted Stevens

(CNN) - Following the death of former Alaska Sen. Ted Stevens, a number of politicians have released statements on the iconic senator's death.

Read the statements, after the jump:
END_OF_DOCUMENT_TOKEN_TO_BE_REPLACED