Washington (CNN) - White House Press Secretary Robert Gibbs is standing by his critique of what he called the "professional left."

"I think I have both my feet firmly planted on the floor and nothing in my mouth to speak of," Gibbs said Wednesday during his daily briefing, after being asked if he had put his foot in his mouth.

In an interview with The Hill newspaper earlier this week, Gibbs went public with his private frustration over harsh criticism from his party's base.

"I hear these people saying he's [Obama's] like George Bush," Gibbs told the paper. "Those people ought to be drug tested."

END_OF_DOCUMENT_TOKEN_TO_BE_REPLACED

Buck: Republicans are also to blame for 'mess' in Washington

[cnn-photo-caption image= http://i2.cdn.turner.com/cnn/2010/images/08/11/art.buck.jkusa2.cnn.jpg caption ="Colorado Senate candidate Ken Buck said Wednesday that Republicans are 'every bit as much to blame' as the Democrats for our nation's troubles."](CNN) - The Republican nominee for Senate in Colorado said Wednesday that Republican frustration with both parties in Washington politics is driving grassroots victories over establishment candidates in GOP primaries around the country.

"I think Republicans realize that Republicans are every bit as much to blame for the mess that we are in in D.C. as the Democrats," Ken Buck told CNN's John King in an interview set to air at 7 p.m. on John King USA. "And we can't send this kind of Republican to Washington, D.C. to fix this mess."

Buck said he doesn't think the Republican Party has a national leader at the moment, and he expects the GOP's 2012 presidential nominee to be selected through "a wonderful process" whereby one contender emerges from a large pool of candidates-much like he has.

"I think we're going to see a number of people get into the race," Buck said. "We'll see who has the stamina, who has the financing, who has […] the grasp of the issues to attract voters."

Watch the segment after the jump:
END_OF_DOCUMENT_TOKEN_TO_BE_REPLACED

(CNN) - Florida Gov. Charlie Crist does not support proposed legislation that would set up an immigration law similar to Arizona's legislation that took effect last month, the independent candidate for the Senate said Wednesday.

Florida Attorney General Bill McCollum, a Republican candidate to replace Crist as governor, proposed legislation that would require law enforcement officers to check a suspected undocumented worker's status in the course of a traffic stop and businesses to use the E-verify system to check the immigration status of job applicants.

"I don't like the Arizona law. I don't think it's the way to go," Crist told CNN's Wolf Blitzer on The Situation Room. "I think the key word […] is 'people that are suspected of being illegal immigrants.' How do you make that determination? By what they look like? That's not part of the America I believe in."

END_OF_DOCUMENT_TOKEN_TO_BE_REPLACED 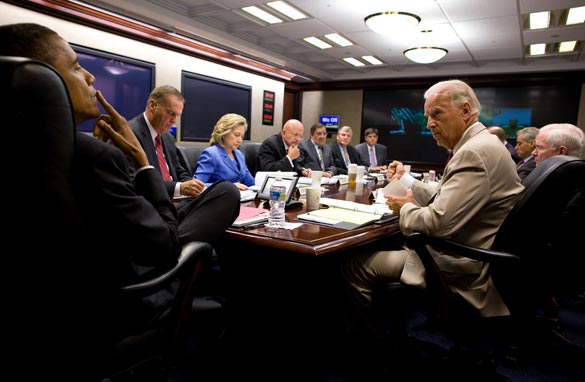 President Barack Obama met behind closed doors with his national security team Wednesday to review the ongoing U.S. engagement in Iraq, according to the White House.

Plans to reduce the total number of American troops in Iraq to 50,000 by the end of this month are on schedule, Obama announced last week.  At that point, the U.S. military mission will shift to training and supporting Iraqi security forces, as well as support for U.S. diplomats.

END_OF_DOCUMENT_TOKEN_TO_BE_REPLACED

(CNN) - President Barack Obama on Wednesday signed into law an act that reduces or suspends tariffs paid by American companies on certain imports needed to manufacture their products.

The Manufacturing Enhancement Act easily passed both chambers of Congress earlier this year.

At the White House signing ceremony, Obama thanked Democrats and Republicans for working together on the measure and called for similar bipartisan support for an additional $5 billion in clean-energy tax credits.

"Don't let politics get in the way of doing what's right for our economy and for our future," said Obama, who was joined by Commerce Secretary Gary Locke and U.S. Trade Representative Ronald Kirk at the ceremony.

American manufacturing was badly hurt by the economic recession, but had been in decline before then, Obama noted.

END_OF_DOCUMENT_TOKEN_TO_BE_REPLACED

Colorado voters mail it in

Denver, Colorado (CNN) - In Tuesday's primary most Colorado voters did not have to worry about long lines at the polls or to remember to get to the precinct before closing time.

For the first time, a majority of counties in the state, 46 of 64, only used mail-in ballots for a statewide partisan primary. In previous elections, counties could offer the convenience of allowing voters to send in their ballots but could not use that system exclusively.

Officials of the Secretary of State's office could not say right now exactly how many of the more than 735,000 ballots cast in the Senate primaries were mail-in. They will know more when they get specific reports back from each county.
As of Friday, more than 515,000 ballots had been received. In order to be counted, ballots had to arrive at a county election office by 7pm Tuesday. They could either be mailed in dropped off at specific locations. State officials say there was a steady stream of drop offs on Tuesday but not an onslaught.
END_OF_DOCUMENT_TOKEN_TO_BE_REPLACED

One part of the plan, announced Wednesday, includes a new $1 billion program that will offer loans to unemployed borrowers at risk of losing their homes. The loans, which will be dispersed through nonprofit and housing agencies, will carry 0% interest and be good for a maximum of $50,000 for up to two years.

The government's department of Housing and Urban Development said it will announce details about the program, coined the Emergency Homeowner Loan Program, in the coming weeks.

(CNN) - The man Levi Johnston may face in his bid for mayor of Wasilla, Alaska is sparing no punches when it comes to the political newcomer.

"Well, it is a little early to declare. Usually most wait until the year the seat is up," current Wasilla Mayor Verne Rupright said in a statement. "But since I am nearly old enough to be Levi's grandfather I think it would be wise for him to get a high school diploma and keep his clothes on. The voters like that!"

Rupright's comments come two days after the production firm Stone & Company Entertainment said it is actively shopping a show that will feature Johnston seeking the post once held by Sarah Palin.