Standing at the border, Hayworth slams McCain on immigration

On a ranch in Hereford, Arizona, and with the border fence visible several hundred yards behind him, Hayworth also praised Arizona's new immigration law that was signed by the state's governor, who has spent the last two days campaigning with McCain.

Pulling a word from a McCain letter on immigration which first surfaced in April, Hayworth said it was time to "regularize the status of John McCain," and remove him from office.

END_OF_DOCUMENT_TOKEN_TO_BE_REPLACED 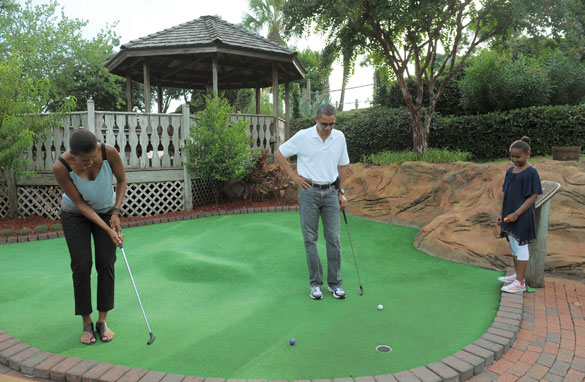 (CNN) - President Obama may get needled by Republicans for spending too much time on the links, but he might need some practice when it comes to miniature golf.

On vacation on Florida's Gulf Coast, the first family–Barack, Michelle and Sasha Obama–spent an hour playing at Pirate's Island Adventure Golf. Malia is away at camp and didn't join the family on their trip.

Despite his clear advantage over his 9-year-old daughter, it took him 11 holes to sink a hole-in-one. How many did it take Sasha? One.

Photo of Sasha Obama's hole-in-one reaction, after the jump:
END_OF_DOCUMENT_TOKEN_TO_BE_REPLACED

In an interview on CNN's State of the Union, the chairman of the Democratic Congressional Campaign Committee, Maryland Rep. Chris Van Hollen, accused congressional Republicans of "gambling" with Americans' retirement savings.

"If you privatize Social Security … the end result will be that that money is not there," Van Hollen told CNN Chief Political Correspondent Candy Crowley. "There is not a stable source of retirement money because we'll be literally gambling it on Wall Street. And that has been a long-held position of our Republican colleagues."

"Republicans want to secure it [Social Security] and make it there for the future," McCarthy said. "One of the reasons why it's actually losing money right now is because there are so fewer jobs out there and fewer people are paying in."

Watch the debate, after the jump:
END_OF_DOCUMENT_TOKEN_TO_BE_REPLACED

Doubts about Obama and Palin

[cnn-photo-caption image= http://i2.cdn.turner.com/cnn/2010/images/06/29/art.petraeus.gi.jpg caption ="Gen. David Petraeus said in an interview broadcast Sunday that the U.S. will have an 'enduring commitment' in Afghanistan."](CNN) - The commanding U.S. general in Afghanistan says success in the war there will require a long and steady U.S. commitment.

"We will have an enduring commitment here in some fashion," Gen. David Petraeus said in an interview broadcast Sunday on the NBC program "Meet the Press."

He later added: "I think this is going require a substantial, significant commitment and that it is going to have to be enduring to some degree."

The Obama administration has been criticized for its announced strategy to start a troop withdrawal in August 2011, with conservatives saying it signals U.S. intentions to the enemy while liberals complain it doesn't end the war soon enough.

END_OF_DOCUMENT_TOKEN_TO_BE_REPLACED

(CNN) - Two days after President Obama declared his support for a controversial proposal to build an Islamic center and mosque near the site of Ground Zero in Manhattan, two New York lawmakers sounded off on the merits of the project.

Republican Rep. Peter King represents a portion of western Long Island less than 20 miles from New York City; Democratic Rep. Jerrold Nadler represents part of Brooklyn and a slice of Manhattan that includes ground zero. In an interview Sunday on CNN's State of the Union, the congressmen differed on how they characterized the sensitivity of building a mosque near such hallowed ground.

"The fallacy is that al Qaeda attacked us. Islam did not attack us," Nadler told CNN Chief Political Correspondent Candy Crowley.

"It is only insensitive if you regard Islam as the culprit as opposed to Al Qaeda as the culprit," he added. "[…]Objecting to the mosque would be as objectionable if you wouldn't object to a church or synagogue in the same place because that's blaming all Islam and you can't blame an entire religion."

But King said "the attack was carried out in the name of Islam," and the fact that many families of 9/11 victims are opposed to the proposal should be enough of a reason to relocate it farther away from where the twin towers of the World Trade Center came down.

END_OF_DOCUMENT_TOKEN_TO_BE_REPLACED

Rogers declined to comment about the Salahis, the couple whose party-crashing ways may have cost her the White House position. Nor did she want to discuss a reality show that features the Salahis and that recently showed footage of the couple with a police escort.

Those images have sparked an investigation by police in Washington D.C., an official said Saturday.

In the interview, Rogers said told CNN she is focused on her strategy for Johnson Publishing Company, Inc, an African-American owned and operated publishing company in Chicago whose portfolio includes Ebony and Jet magazines.