Click to watch video
Washington (CNN) – Evangelical leader Franklin Graham, son of famed presidential religious adviser Billy Graham, said Thursday that he believes President Barack Obama is a Christian, but that the president was born a Muslim because of his father's religious beliefs.

Asked by CNN Chief National Correspondent John King if he had any doubts about Obama's Christian faith, Graham, who has made controversial comments about Islam in the past, said the president's background is fueling the false perception that he is a Muslim.

Earlier this year, the Army rescinded its invitation to Graham for the National Day of Prayer at the Pentagon over controversial remarks he made about Islam.

END_OF_DOCUMENT_TOKEN_TO_BE_REPLACED

Palin's defense of Schlessinger, which Palin posted on her Facebook page, is the second time the former Alaska governor has defended the talk show host. Palin came to Schlessinger's defense on Wednesday via Twitter, telling the radio host: "don't retreat...reload!"

"Does anyone seriously believe that Dr. Laura Schlessinger is a racist?" Palin wrote. "Anyone, I mean, who isn't already accusing all conservatives, Republicans, Tea Party Americans, etc., etc., etc. of being racists?"

END_OF_DOCUMENT_TOKEN_TO_BE_REPLACED

"I sort of feel in some respects I'm being pulled along in this," Santorum told the Des Moines Register on Wednesday. "I'm still seriously going through this process. And at this point I'm very encouraged by everything that's happening."

In July, Santorum met privately with several of his former Capitol Hill staffers to pitch the idea of a presidential bid in 2012, something the Republican is now talking openly about.

"There seems to be support on the ground at least to consider this," Santorum told the Des Moines Register. "The response has been surprisingly positive."

END_OF_DOCUMENT_TOKEN_TO_BE_REPLACED

(CNN) -  With broadcast reports and pictures  Wednesday evening celebrating the last U.S. brigade combat team leaving Iraq and  crossing the border into Kuwait, the White House and Pentagon scrambled to  explain that the war in Iraq is not over.

With the August 31 deadline for withdrawing  U.S. combat troops fast approaching, administration officials were caught off  guard by the onslaught of questions about the moment's  significance.

The broadcast pictures were of a convoy of service members from the 4th Stryker Brigade, 2nd Infantry Division leaving Iraq.

END_OF_DOCUMENT_TOKEN_TO_BE_REPLACED

[cnn-photo-caption image= http://i2.cdn.turner.com/cnn/2010/images/08/19/art.ofafundraiser.ofa.jpg caption ="Organizing for America is fundraising off of the news that Fox News’ parent company gave a large donation to the Republican Governors Association."](CNN) - Organizing for America, President Obama's political organization that is now run out of the Democratic National Committee, sent a fundraising email to supporters Thursday that highlights a $1 million donation from News Corp. to the Republican Governors Association.

News Corp. is the parent company of Fox News, an organization the White House has sparred with in the past. In October, White House Communications Director Anita Dunn said, "The reality of it is that Fox often operates almost as either the research arm or the communications arm of the Republican Party."

That sentiment was echoed in Thursday's fundraising email.

"News Corp. - the parent company of Fox News - just donated $1 million to the Republican Governors Association, an official organization campaigning against Democrats all over the country this fall," Organizing for America director Mitch Stewart said in the e-mail. "It's one thing to echo Republican talking points and hire Sarah Palin for political 'analysis.' It's another thing to cut those Republicans a seven-figure check to fund their attack ads and robo-calls."

END_OF_DOCUMENT_TOKEN_TO_BE_REPLACED

Tancredo confirmed to CNN that until now he was willing to withdraw his third party candidacy if—and only if—Maes was willing to drop out of the race and allow the party to replace him with another candidate.

"He can't win," Tancredo said of Maes. "He's not a credible candidate."

END_OF_DOCUMENT_TOKEN_TO_BE_REPLACED 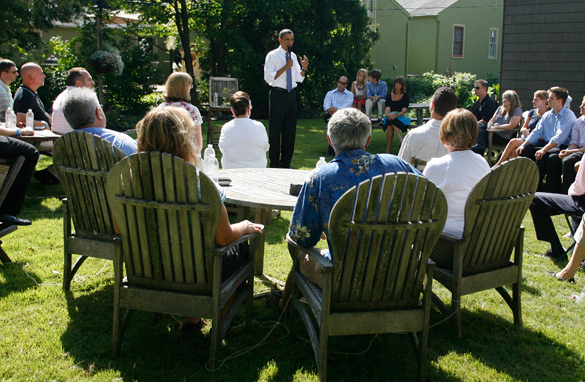 Obama delivered similar versions of the speech at six fundraising events this week, kicking into full campaign mode with calls to continue the progress made so far by his administration.

His poll numbers are shrinking, and Democrats are resigned to losing some congressional seats in November.

[cnn-photo-caption image= http://i2.cdn.turner.com/cnn/2010/images/08/19/art.obama.0819i.gi.jpg caption =" The White House on Thursday responded to new polls which indicate Americans do not know what religion President Obama practices."]Vineyard Haven, Massachusetts (CNN) - The White House is responding to new polls Thursday that show an increasing number of Americans believe that President Obama is a Muslim.

"President Obama is a committed Christian, and his faith is an important part of his daily life," Deputy White House Communications Director Jen Psaki told CNN. "He prays every day, he seeks a small circle of Christian pastors to give him spiritual advice and counseling, he even receives a daily devotional that he uses each morning. The President's Christian faith is a part of who he is, but not a part of what the public or the media is focused on everyday."

Psaki added that "the President's strong Christian faith is what guides him through the challenges – a recovering economy, bringing troops home from Iraq, putting healthcare and financial reform implementation in place - but he doesn't wear it on his sleeve."

According to a poll conducted by the Pew Forum on Religion and Public Life released Thursday, nearly one in five Americans believe Obama is a Muslim, up from around one in 10 Americans who said he was Muslim last year.

END_OF_DOCUMENT_TOKEN_TO_BE_REPLACED

New York (CNNMoney.com) - The Congressional Budget Office on Thursday offered economic projections that will inform lawmakers tackling one of the most controversial issues they face: how to balance the need to help the economy and curb U.S. debt.

If the Bush tax cuts for the majority of Americans and stimulus spending are allowed to continue, economic growth could be higher and unemployment lower in the near term than if the tax cuts and stimulus efforts expired as scheduled, CBO projected. But deficits would be higher.

"[It would provide] a considerable boost to economic activity in 2011 and beyond for a few years," said CBO Director Douglas Elmendorf. "Over time, [however,] the negative consequences of very high federal borrowing build up."

[cnn-photo-caption image= http://i2.cdn.turner.com/cnn/2010/images/07/19/art.palin.gi.jpg caption ="An event featuring Sarah Palin has not proved to be a big sell."](CNN) - Sarah Palin is normally a major draw on the speaker's circuit, but the former Alaska governor is proving to be a hard sell for an upcoming engagement in Florida.

Palin is scheduled to speak in Jacksonville for a fundraising event on behalf of Heroic Media, a Austin, Texas-based group that describes itself as "a faith-based non-profit that reduces abortion by creating a Culture of Life through television, billboard and internet advertising."

The event - called "Evening of Hope with Sarah Palin" - was planned to be held in a 3,000-seat auditorium but has been moved to a 609-seat venue to ensure the speech will be sold out, Mark Nelson, the Florida director of Heroic Media told CNN.