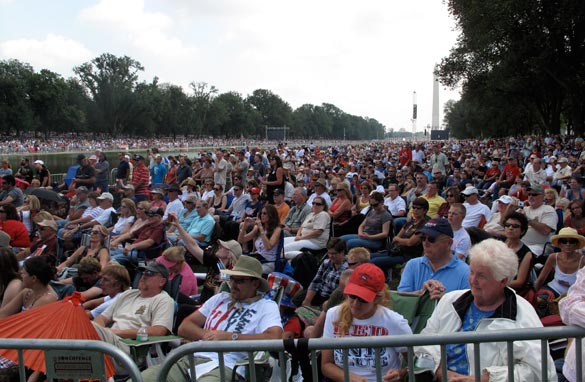 Washington (CNN) - If you’ve ever tried to guess how many jelly beans are inside a huge jar, you have some idea what it’s like to estimate crowds at massive Washington D.C. rallies.

But the stakes in Washington are far higher, with the estimates politically charged and highly controversial. U.S. Park Police, burned by previous controversies, no longer makes them. So there are no official estimates of crowd size at events on the National Mall.

And Saturday’s “Restoring Honor” rally with Fox News and radio show host Glenn Beck was no different. There was wide disagreement of just how big the crowd near the Lincoln Memorial was, followed by claims that some estimates low-balled the size.

CBS News took a scientific approach, commissioning a crowd estimate by the company AirPhotosLive.com. The network reported that AirPhotosLive estimated the crowd at 87,000 people. But they noted that with a margin of error of 9,000, “between 78,000 and 96,000 attended the rally.”

The NBC Nightly News estimated the number of people in attendance as “tens, perhaps hundreds of thousands.”

ABCNews.com reported “the rally has attracted more than 100,000 people.”

And the Post quoted Rep. Michele Bachmann (R-Minnesota), speaking soon after the rally ended as saying, "We're not going to let anyone get away with saying there were less than a million here today – because we were witnesses."

CNN contacted AirPhotosLive.com about the estimate they did for CBS News. A company official told CNN they used photos taken from their tethered balloons to shoot photos at the height of the crowd. They then had 3 experts use their own methodologies to evaluate the crowd. Company officials said they extrapolated the crowd size from 2-D and 3-D grids of the photographs marked off in small boxes.

The New York Times noted, “Officials do not make crowd estimates because they are unreliable and can be controversial,” adding, “by any measure it was a large turnout.”

So how many people were really there? In the end, most people will believe what their own eyes tell them. And the one estimate guaranteed to be right: Beck’s own comment making fun of the inevitable controversy: "I have just gotten word from the media that there are over 1,000 people here today.”

Sarah Palin responded to the media reports on her Twitter page around 12:45 p.m. ET.