CNN's Dana Bash to be honored

"These reporters produced good, tight coverage of members of Congress. Their work informed the public about how the system works," the foundation judges said in a statement regarding this year's three recipients.
END_OF_DOCUMENT_TOKEN_TO_BE_REPLACED 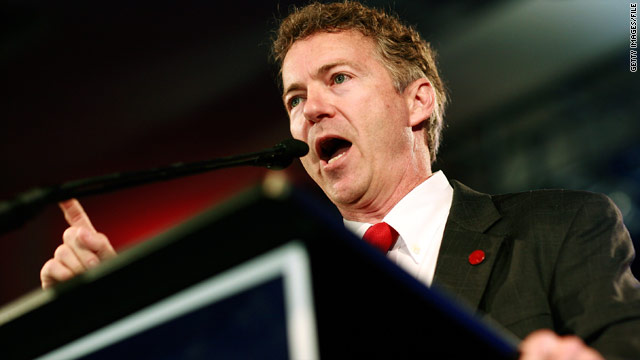 Sen.-elect on tax deal: I'm leaning against it

Washington (CNN) - Kentucky's Senator-elect Rand Paul says that if he were already in Congress he would lean against voting for the recently announced tax deal.

In an interview airing on CNN's "The Situation Room with Wolf Blitzer" Wednesday at 6 p.m ET, Paul expresses strong opinions about the deficit, spending, and the tax deal proposed by President Barack Obama.

END_OF_DOCUMENT_TOKEN_TO_BE_REPLACED

WASHINGTON (CNN) –- In a dramatic escalation of the rhetoric over President Obama's controversial tax cut deal, senior White House economic adviser Larry Summers warned Congress on Wednesday that failing to pass the legislation could lead to a double-dip recession in 2011.

"If they don't pass this bill in the next couple weeks it will materially increase the risk that the economy would stall out and we would have a double dip," he told reporters at a White House briefing.
FULL STORY

Elizabeth Edwards funeral to be open to the public

Representatives for the Edwards family confirmed that the service will be held at the Edenton Street United Methodist Church in Raleigh, where the Edwards family worshiped. The funeral will be open to the public.
END_OF_DOCUMENT_TOKEN_TO_BE_REPLACED

Elizabeth Edwards to be buried next to son

A representative for the Brown-Wynne Funeral Homes told CNN it will be held at the Edenton Street United Methodist Church in Raleigh, where the Edwards family worshipped.
END_OF_DOCUMENT_TOKEN_TO_BE_REPLACED

(CNN) – Saturday Night Live's Seth Meyers is set to take his turn as host of the White House Correspondents Association dinner, the annual Washington event that brings together elite members from the media, government and Hollywood alike.

Meyers, not necessarily known for his standup routine, but still among the most popular cast members on SNL, follows Jay Leno's hosting of the event last year in a performance viewed by media critics as falling flat.
END_OF_DOCUMENT_TOKEN_TO_BE_REPLACED

Washington (CNN) - A new poll indicates that two-thirds of Americans support the deal between President Barack Obama and congressional Republicans to temporarily extend tax cuts for all Americans.

But another new survey indicates that a majority of the public is not in favor of the extension of the Bush-era tax cuts for the wealthiest Americans.
END_OF_DOCUMENT_TOKEN_TO_BE_REPLACED

"Minnesotans have made their choice, by however thin a margin, and we respect that choice," Emmer said in a press conference Wednesday.
END_OF_DOCUMENT_TOKEN_TO_BE_REPLACED

(CNN) – If New York City Mayor Michael Bloomberg is trying to tamp down speculation he is considering a third-party presidential bid, his speech Wednesday didn't do the job.

According to prepared remarks distributed by Bloomberg's office, the New York City mayor took aim at both Republicans and Democrats when it comes to each party's handling of the economy in a Brooklyn speech sponsored by the Association for a Better New York.
END_OF_DOCUMENT_TOKEN_TO_BE_REPLACED

Details being mapped out for likely Saturday funeral for Elizabeth Edwards

One of them tells CNN the service will be in Chapel Hill, likely on Saturday. The close and trusted family friend said that the estranged wife of 2008 presidential candidate John Edwards mapped out a lot of the details before her passing.

Edwards died on Tuesday after a prolonged battle with breast cancer. She was 61 years old.
END_OF_DOCUMENT_TOKEN_TO_BE_REPLACED