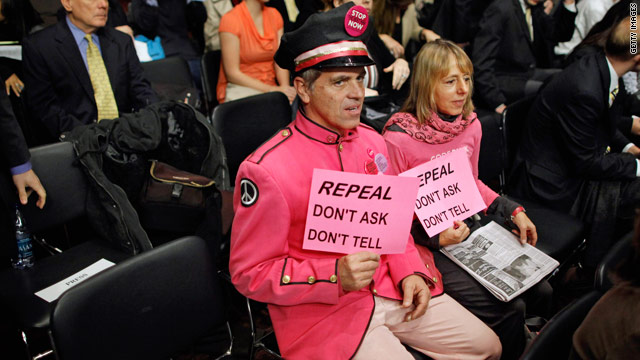 Washington (CNN) - Two-thirds of Americans say they favor repealing a law that bans openly gay and lesbian troops from serving in the U.S. military, according to a new national poll.

As Congress contemplates repealing the "Don't Ask, Don't Tell" measure, a Gallup survey released Thursday indicates that 67 percent of the public say they would vote for a law that would allow gays and lesbians to serve openly in the armed forces, with 28 percent saying they would vote against such a bill, and five percent unsure.

According to the Gallup poll, more than eight out of ten Democrats and seven out of ten independent voters support repealing the measure, with Republicans split on the issue.

The poll was conducted December 3-6, after the release of a major Pentagon study on the view of troops about the possible lifting of the current ban. Defense Secretary Robert Gates testified in front of

Congress that the report indicated that over two-thirds of service members do not object to gays and lesbians serving openly in the U.S. armed forces.

The Gallup poll was conducted by telephone, with 1,003 adults nationwide questioned. The survey's overall sampling error is plus or minus four percentage points.