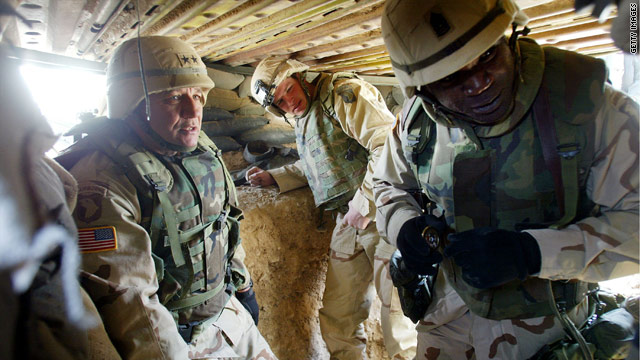 Washington (CNN) – The top enlisted adviser for U.S. forces in Afghanistan said on Friday that he believes the troops are ready for a repeal of 'don't ask, don't tell,' and that those who oppose ending the policy should leave the military.

"If there are people who cannot deal with the change, then they're going to have to do what's best for their troops and best for the organization and best for the military service and exit the military service, so that we can move forward – if that's the way that we have to go," Command Sergeant Major Marvin Hill told 'Washington Watch' host and CNN contributor Roland Martin in an interview that will air Sunday on TV One Cable.

Hill also said that military leaders are prepared to lead their troops through a smooth transition of the repeal to the policy banning openly gay and lesbian soldiers from service, despite concerns by some combat units that ending 'don't ask, don't tell' will cause disruption at the frontlines of the war.

"We know that if there is a change, that that change will have to be led, and it's going to have to be led by senior leaders such as myself and – and others across the battlefield," Hill said. "Senior leaders are the ones [that are] going to set the tone in the unit and enable the unit to move forward."

A year-long Pentagon review found that repealing the policy would have "some limited and isolated disruption to unit cohesion and retention," but few long-term effects on the military.

But the Senate last week rejected a Democratic bid to open debate on a defense authorization bill that includes a provision to repeal the 'don't ask, don't tell,' potentially dealing a blow to efforts to pass the measure before the House changes into Republican hands come January.