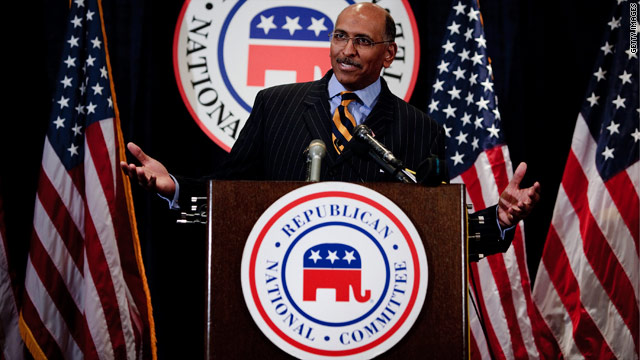 Washington (CNN) - Michael Steele broke a weeks-long silence Monday night and announced that he will seek a second term as chairman of the Republican National Committee.

Steele revealed his intentions in a lengthy private conference call with RNC members, several of whom relayed the news to CNN.

Speaking for nearly 40 minutes, Steele touted Republican gains at the ballot box in November and said the RNC deserves a share of the credit. Under his watch, he said, the committee was re-shaped to empower grassroots activists and state party organizations in places where the GOP has traditionally not been competitive.

"While we began this cycle bowed, we did not break," Steele said on the call. "We ended better and stronger."

Without getting into specifics, Steele accepted responsibility for some of his actions that may have reflected poorly on the committee. He said he would focus on "implementing a new accounting and reporting system" for party finances.

"Yeah, I have stumbled along the way, but I have always accounted to you for shortcomings," he told RNC members on the call. "I have made no excuses, I have told no lies, and I have no agenda. I have tried to be honest, sometimes to a bloody fault."

He also fired back at critics who have accused him of abandoning big GOP donors who traditionally donated to the RNC but looked elsewhere in 2010. He said those critics are "in denial."

"People have been talking a lot of smack about major donors, but you cannot take away from the fact that you and we raised $179 million," he boasted, noting that the figure is higher than what the Democratic National Committee raised in 2006 when their party was out of power.

The controversial chairman remained unusually silent in recent weeks and kept even his closest allies on the committee guessing about his future. Several media outlets reported that Steele was all but certain to decline a second bid, making his decision Monday all the more surprising.

Just hours before the conference call, even some of his top allies on the committee had no clue about Steele's thinking.

"I have no idea what he's going to do," one Steele confidante on the committee told CNN late Monday afternoon. "I hope he does run."

That committee member called back an hour later to say that Steele was indeed running, and that Steele had emailed re-election talking points to his allies on the committee.

Steele joins the already crowded race as a frontrunner with just one month to go until the chairmanship election, scheduled to take place at the RNC Winter Meeting in mid-January. Insiders say Steele has the backing of at least 30 members of the committee, a larger bloc of support than any other candidate in the race.

Committee members of all stripes, though, believe the race remains a wide open affair.

Steele must ultimately count on the support of at least 85 of the committee's 168 members to win re-election, which could be a difficult proposition after a rocky two-year term marred by a string of damaging verbal gaffes and questions about his ability to raise money from big GOP donors.

Steele's opponents, not surprisingly, say the chairman has no chance of winning again. "Dead man walking," quipped one GOP strategist working for a Steele rival.

"I don't know exactly what the numbers are, but I do know that he has more votes lined up than any other candidate exponentially," Hughes told CNN. "I think they would all like to be in the position that he is in now. Chairman Steele is ahead with the relationships that he has built up."

With his rivals dividing the remaining votes, the race is likely to come down to which candidate can emerge as the strongest alternative to Steele.

"There will be no consensus for a while," one of Steele's opponents in the race told CNN. "But everyone will start doing a more critical analysis. The good news for most of us is the focus will remain on Steele."

Steele's decision appears to have sidelined Minnesota Sen. Norm Coleman, who had been exploring a bid and making calls to committee members as recently as Monday morning. But Coleman had said he will not run if Steele entered the race, a position he re-affirmed to CNN.

"Senator Coleman has been consistent that he has no intention of running against Chairman Steele," a spokeswoman for Coleman emailed.