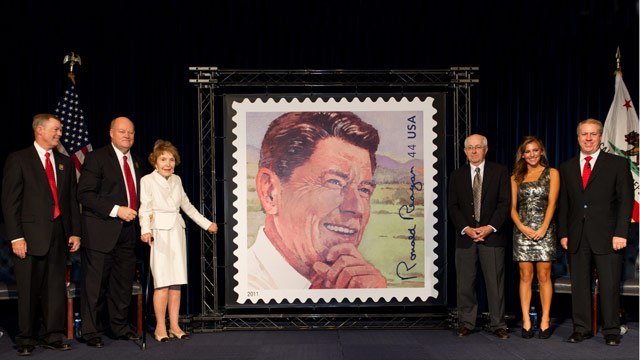 The price of a President Reagan stamp has gone up over the years. The first stamp dedicated to the late president was issued at 37 cents. The new stamp will cost 44 cents, and is expected to become a forever stamp.

The stamp was revealed during a ceremony at the Reagan Library in California that was attended by former first lady Nancy Reagan. James C. Miller, a former member of Reagan's cabinet and current member of the Board of Governors of the U.S. Postal Service, also made remarks.

"With President Reagan, what you saw was what you got: humble, honest, and trustworthy," Miller said. He remembered Reagan as someone who "had extraordinary trust in the goodness and good sense of the American people" and pledged to do everything he can to make Reagan's centennial stamp a forever stamp.

The new stamp, a third dedicated to Reagan, will go on sale in February of 2011.