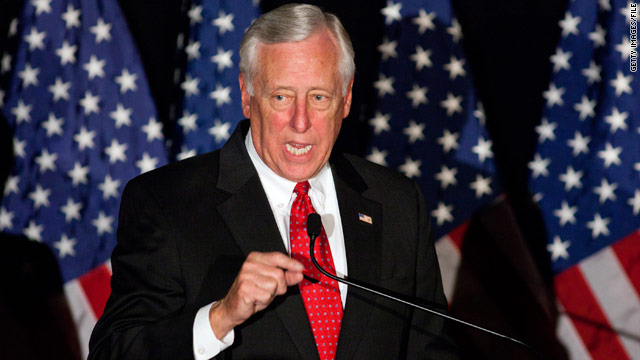 "I think, frankly, that ultimately we will pass legislation," Hoyer said at his weekly session with reporters on Capitol Hill.

House Democratic leaders were meeting Tuesday afternoon before meeting with the full Democratic caucus Tuesday night to decide what to do next-even though any effort to change the deal could end up being mostly symbolic.

Hoyer emphasized that House Democrats still oppose the estate tax provision in the bill, because they believe it is too generous. He noted that the House already passed its own version that exempts those inheritances up to $3.5 million and imposes a 45% tax rate. The President's plan exempts those estates up to $5 million, with a 35% tax rate for those above.

House Democrats are considering voting on an amendment that would change the estate tax to the House-passed version. If that amendment passes, the bill would need to go back to the Senate for another vote. Since any change to the package would likely be rejected by the Senate, this sets up a possible "ping pong" scenario that would mean the Senate would have to send back the original tax bill -without any changes to the estate tax provision– for the House for a second vote. Nevertheless House Democratic leaders may allow a vote on the amendment, even though they know it would ultimately fail, to give those unhappy with the President's plan a chance to say they tried to change it.

Hoyer said he still hopes that the House will wrap up the lame duck session by the end of this week, but left open the possibility that it could stay longer if necessary.

Referring to the bipartisan Senate vote, 83-15, to move ahead with the bill, Hoyer said it "indicates an urgency that is felt by a broad spectrum that the middle income taxes not be increased come January 1. In order to affect that, you've got to pass a bill."

Asked about the temperature among House Democrats on the President's tax plan, Hoyer described it as "pretty cold." He said many Democrats have "mixed feelings" about the proposal because they want to see unemployment benefits extended and ensure that no middle class tax Americans see their taxes increased, but they still oppose extending tax breaks for the wealthy and the estate tax provision.

The number two House Democrat said he didn't think it was necessary for President Obama to come up to discuss the tax bill with House Democrats.

Asked about former President Clinton's impromptu press conference last week in the White House briefing room urging support for the tax compromise, Hoyer called it "classic Clinton" and marveled at the former President's "extraordinary command of the facts." But Hoyer didn't know if Clinton's appeal would have any impact on the vote in the House.