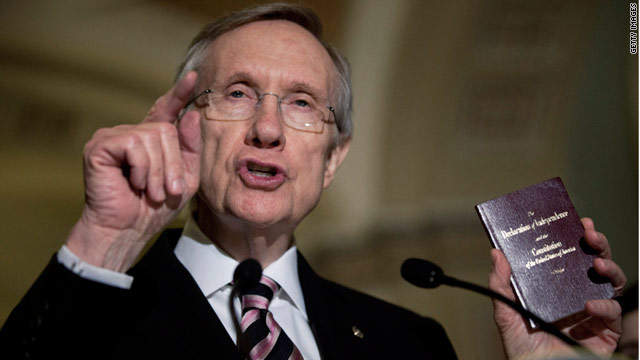 "Some people who speak out against congressionally directed spending or earmarks are people who have more earmarks than others. They're hoping, of course, it will pass and they can go home and do the press events as they've done with the stimulus money that we have gotten back to the states saying, 'Here I am, cut the ribbon, look what I did.' You can't have it both ways," Reid said at a news conference.

"I bet if you went to 'h' in the dictionary and found 'hypocrite,' under the word would be people who ask for earmarks but vote against them."

The separation of powers is spelled out in the U.S. Constitution, including the right of Congress to make decisions about funding, Reid said holding up a pocket-sized copy.

"I am convinced that I do not want to give up more power to the White House, whether it's George Bush or Barack Obama and I'm going to fight as hard as I can against President Obama on these earmarks and my Republican colleagues who hate to vote for them but love to get them," he said.

Just a few weeks ago, many Republicans-including Senate Minority Leader Mitch McConnell– made the very same argument that Congress should not cede its constitutional spending power to the executive branch-until they came out against all earmarks in recent days.

Reid's comments come as the Senate is preparing to vote on a giant bill to fund the government next year. Republican support for the bills is fading, according to a top Republican leadership aide, in part because of all the earmarks in it. However, Democratic leaders aren't convinced and plan a key test vote, probably this weekend, that will need GOP support to prevail.

In response to Reid, a spokesman for Minority Leader McConnell told CNN that of the seven Democrats who voted in favor of an earmark ban recently, only Sen. Claire McCaskill of Missouri is on-the-record opposing the government spending bill.