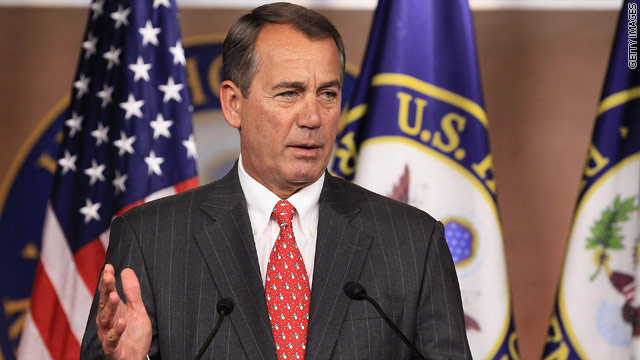 Asked about Palin's comments, Boehner said "our first goal was to stop the tax hike that was coming on January 1st."

The GOP Leader acknowledged that some conservative Republicans "didn't think the agreement on the tax bill was a good one." But he argued, "while there was an agreement considering that the Democrats control the House, the Senate and the White House, I thought on balance it was worthy of my vote and I voted for it."

Boehner emphasized the bill ultimately passed with a strong bipartisan vote. He pointed to public opinion polls showing support for the bill, noting, "you saw polling all week that indicated that the American people were in favor of stopping all the tax hikes."

Although Boehner cast his vote for the bill just before midnight Thursday, he didn't go to the floor to make a speech urging his colleagues to support it. Asked why he didn't speak during the floor debate, Boehner told reporters "I didn't think I needed to get in the way." Thirty six House Republicans, including third ranking House Republican Mike Pence, Indiana, voted against it. The number two House Republican, Eric Cantor of Virginia, did make a floor speech in favor of the bill, saying the bill was "not perfect" but should pass to avoid tax increases.

Asked if the tax cut deal could be a model for future bipartisan compromises with President Obama, Boehner said, "No one can predict what the next month or he next year will look like, other than I've told the President the same thing I've told him over the last two years - I'll always be upfront with him, honest with him and fair. But I've also told the President, the American people have spoken, it's time for Washington to listen."

Although he was invited, the incoming Speaker will not be attending the bill signing at the White House on Friday afternoon. His spokesman declined to comment on why he decided against going. But since the bill ultimately needed Senate Republican votes to pass, Boehner let Senate GOP Leader Mitch McConnell take the lead negotiating the details and McConnell is expected to attend the bill signing.