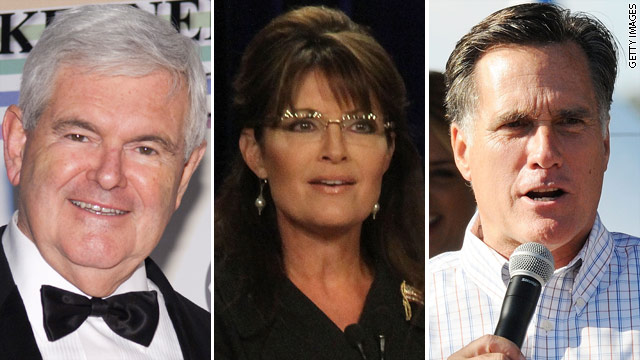 Washington (CNN) - The proposed nuclear arms treaty with Russia, the New START, is now a political football of sorts, entering into the 2012 lexicon.

While the bill remains a point of contention between Democrats and Republicans on Capitol Hill where the Senate has yet to vote on the measure, some potential 2012 GOP presidential candidates are staking out their positions.

Former Alaska Gov. Sarah Palin said the treaty is not in America's best interest because while the Russians are allowed to increase their nuclear arsenal, the bill requires the U.S. to reduce the number of its nuclear weapons, a charge the White House denies.

"It should not be rammed through in the lame duck session using behind the scenes deal-making reminiscent of the tactics used in the health care debate," Palin wrote in "The National Review" on Friday. "If I had a vote, I would oppose this deeply flawed treaty submitted to the Senate."

Former Massachusetts Gov. Mitt Romney also equated the treaty to the health-care reform bill passed earlier this year and said there should be no hurry to pass the legislation, an opinion held by many Senate Republicans.

"A treaty so critical to our national security deserves a careful, deliberative look by the men and women America has just elected," Romney wrote in the Boston Globe. "The president is in a hurry for the same reason he has been in a hurry before: he knows that if his vaunted treaty is given a thorough review by the Senate, it will likely be rejected. And well it should be."

In an email to supporters, former House Speaker Newt Gingrich wrote that it would be "dangerous and irresponsible" to pass the treaty before the new Congress takes their oaths in January.

"We must stop the rushed consideration of a treaty that threatens to compromise America's right of self defense," Gingrich wrote Friday. "Once we've rejected the Left, we must start in January to replace their obsolete ideology and policies with a new model of safety, prosperity and freedom."

President Obama used his weekly television and Web address to encourage a vote on the measure. He said failure to pass the bill would serve to undermine American leadership and turn back the progress made with Russia.

"Ratifying a treaty like START isn't about winning a victory for an administration or a political party. It's about the safety and security of the United States of America," Obama said. "It's time to get this done. It's time to show the same spirit of common purpose on our security that we showed this week on our economy."

An amendment by the GOP's last presidential nominee, Arizona Sen. John McCain failed Saturday. McCain has argued that the treaty would limit defense options for the U.S. and his provision proposed striking a section of the preamble on missile defense. Proponents of the treaty said the McCain amendment guts it.

The Senate will remain in session Sunday to continue debating the bill that stalled in the chamber Thursday night when members chose to address other issues including the DREAM Act and repeal of the military's "don't ask, don't tell" policy on gays in the armed forces.

The treaty would resume mutual inspections of U.S. and Russian nuclear arsenals while limiting both nations to 1,550 warheads and 700 launchers each.

It cleared the Senate Foreign Relations Committee in September and is endorsed by leading Republican figures, including former President George H.W. Bush, five former secretaries of state and Indiana Sen. Richard Lugar, who serves as ranking minority member of the Senate committee.

Democratic Senators John Kerry of Massachusetts and Bill Nelson of Florida and Lugar have said the bill would pass if the Senate votes. But Republicans want more time to debate the bill and offer substantive amendments.

According to a recent NBC/Wall Street Journal poll, 70 percent of those polled support passing the bill, 25 percent do not support passage and 5 percent are unsure. The nationwide survey was conducted December 9 through 13 and had a margin of error of plus or minus 3.1 percent.