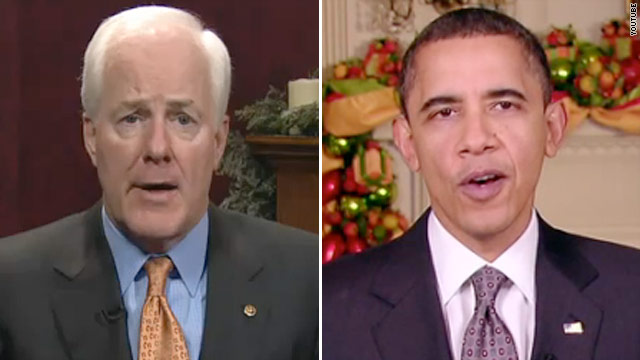 The politics of a compromise

(CNN) - Both parties touted the passage of the bipartisan tax deal signed into law Friday in their weekly internet and radio addresses, but their description of the process shows party divides are still alive and well.

The compromise, which passed in the Senate and House, was the result of negotiations between both parties and the White House that came together after Republicans made significant gains in both chambers, winning the majority in the new House.

Representing the GOP, Sen. John Cornyn of Texas said the agreement is an example of how the choices made in the election have "already changed the terms of the debate here in Washington" and show the "American people that we (Republicans) got the message."

"This bipartisan agreement was made possible because voters gave Republicans much more leverage at the negotiating table," Cornyn said Saturday. "Our leverage forced the White House to abandon its 'class-warfare' rhetoric; stop pandering to the President's left-wing base; and do the right thing for American taxpayers and job creators."

In his weekly address, President Barack Obama described the package as an important step for the economy.

"Like any negotiations, there was give and take on both sides," Obama said. "But I'm heartened by our ability to come together to do what's best for middle class families across the country, and our economy as a whole."

The bill includes a two-year extension of the Bush-era tax cuts, a continuation of unemployment benefits for the long-term unemployed for 13 months, as well as a two percentage point cut in the payroll tax and the revival of the estate tax at a lower level.

As an example of the changes in Washington since the election, Cornyn referenced the health care vote last Christmas Eve, calling it a "divisive 2.6 trillion dollar health care bill strictly along party lines."

"This year, God willing, Washington will give the American people a far better gift: a silent night," Cornyn said.