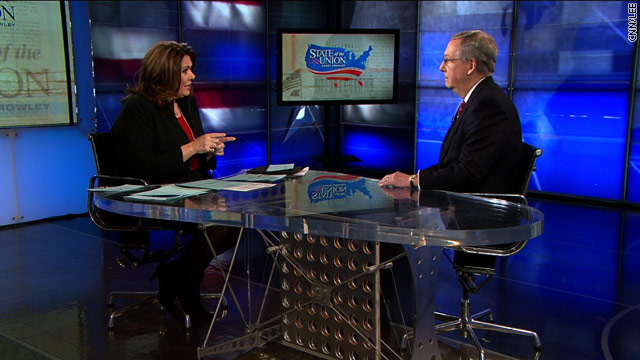 "I've decided I cannot support the treaty," McConnell said on CNN’s “State of the Union.” "I think if they'd taken more time with this, rushing it right before Christmas strikes me as trying to jam us."

Click to watch video
He said trying to get a vote before Christmas was not the best way to "get support of people like me," and that GOP senators are "uneasy" about the legislation.

Although he said the administration has told him they're committed to missile defense, he's worried about how Russia and European allies of the United States "view missile defense."

Regarding the timeline for a vote in the Senate, the minority leader said he assumes Democrats are looking to vote on the treaty before Christmas, but that it's unclear whether that will happen. Asked if enough Republicans would join with Democrats to ratify the treaty, he said: "We're going to find out here in the next few days."

The treaty, which has been a top priority for President Obama and Senate Democrats, would resume mutual inspections of U.S. and Russian nuclear arsenals while limiting both nations to a certain number of warheads and launchers.

McConnell also said the Senate will pass a short-term measure that would fund the government until March. The chamber approved a similar measure Friday - the day the current resolution expired - to keep the government running until Tuesday night.

McConnell's appearance comes shortly after the White House and Congressional Republicans worked together to pass a tax package. The top Senate Republican said he found working with the president "just fine."

"We weren't sent here to do nothing," McConnell told CNN Chief Political Correspondent Candy Crowley. "If the administration believes they need to go in a different direction and it mirrors the things that I and my members believe is good for the country, we're going to do it."

“We have spent the last four days on the Senate floor debating the treaty,” Reid said in a statement. “I know many senators, including my colleagues on the other side of the aisle, who share my belief that this treaty is too critical to our national security to delay.”