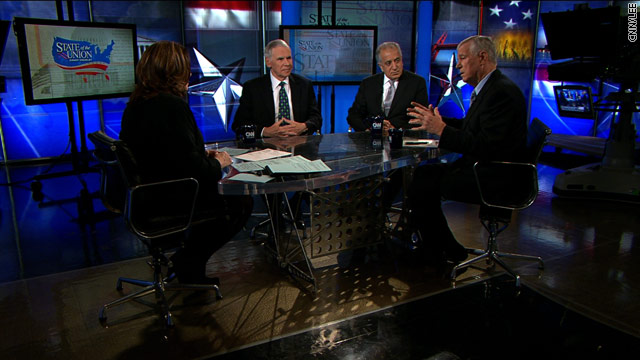 (CNN) - Ok, here’s the Reader’s Digest version of what happened on the show. First, Senator Mitch McConnell, the top Republican on the Senate side said A) he’s not going to support the U.S. missile treaty with Russia otherwise known as START – that he’s worried about a variety of things and he doesn’t think there’s been enough time to actually digest what it is.

Click to watch video
However, if you read between the lines it seems to me that it might pass anyway and they might have – the Democrats might have the necessary Republican votes to put it over the top. He also said that he and the Democratic leader Harry Reid have agreed to keep the government running. Everyone who gets a check from the government or any kind of service from the government will be happy to know that it will continue to keep running at least through March, because they’ve agreed on that, the two leaders. So they’re going to go home for Christmas, also the bottom line for them.

The three, like smart guys - the general, the admiral, and the ambassador, talked about Afghanistan but we also talked about (North) Korea and I thought that was interesting because the former ambassador to Afghanistan who was also the former U.N. ambassador for the U.S. said he didn’t think that Korea was going to respond at all to any kind of U.N. sanction that might be going on or harsh statement. And all of them agreed that we’re running out of time to make nice with Pakistan.

The fact of the matter is, the U.S. timetable for getting out of Afghanistan sort of means that Pakistan and the U.S. have to step up their relationship and I don’t think that will happen. But I loved – I also have to say that I loved the post office carrier’s union guy simply because he sort of opened this whole new door to things that the postman can do.

I mean think about it. It is the only company in the United States that has people that virtually go the mailbox of every American. So we were talking about the many ways you could use those kinds of boots on the floor for national emergencies, etcetera, because guess what? Things like this means that people aren’t using the post office as much anymore. Instead of mailing every single one of you a letter I can now talk to you on our website so I thought it was kind neat to think about that. That’s my Reader’s Digest version.

“I’ve decided I cannot support the (START) Treaty. I think the verification provisions are inadequate and I do worry about the missile defense implications of it. The McCain amendment yesterday regarding missile defense was defeated, and I know the administration actually sent a letter up yesterday, indicating they’re committed to missile defense. But an equally important question is how do the Russians view missile defense and how do our European allies view missile defense? And I’m concerned about it. I think if they’d taken more time with this – rushing it right before Christmas, it strikes me as trying to jam us. I think if they’d taken more time – I know the members of the Foreign Relations Committee spent a lot of time on this but the rest of us haven’t. And so all of a sudden we’re once again trying to rush things right here before Christmas Eve. I think that was not the best way to get the support of people like me.”

“I think what we’re seeing is progress for sure, at least in my view and I’ve talked to some of the military commanders involved over there right now. They’re pretty positive, at least about - I think people have to realize the progress in that country is uneven and different in different areas around the Helmand province and Kandahar – progress is pretty good. I talked to the Marine division commander that’s operating there today and he’s pretty optimistic that the government down there is solid, the people are being protected, Taliban influence has waned considerably. But if you go closer to Pakistan it’s more problematic.”

“I think it’s wise to keep in mind we’ve gone through several phases of activity in Afghanistan the last year and a half. There’s a concerted effort to try to get a better handle on security in the south, where things have been most problematic. At the same time, things in Pakistan have changed too, and it seems one of the things that I noted is in Pakistan, just about every time it looks like there might be things getting ready to make some progress, something else happens that’s distracting.”

Zalmay Khalilzad, former U.S. Ambassador to the United Nations, on CNN’s “State of the Union”

“We should put in my view both more positive on the table to incentivize Pakistan to change, and more negative – consider pressure indirect or direct, to bring about a recalibration in Pakistan. Without that, it will take a long time for us to succeed and I don’t know whether we have the political timetable available.”

“This is a lot of bluster on the North’s part and so I mean it depends in part of the Republic of Korea’s reaction. But given the stakes and given how tragic any incident could be or further escalation, I think it’s a hot spot but I don’t think there is a real worry of it breaking further.”